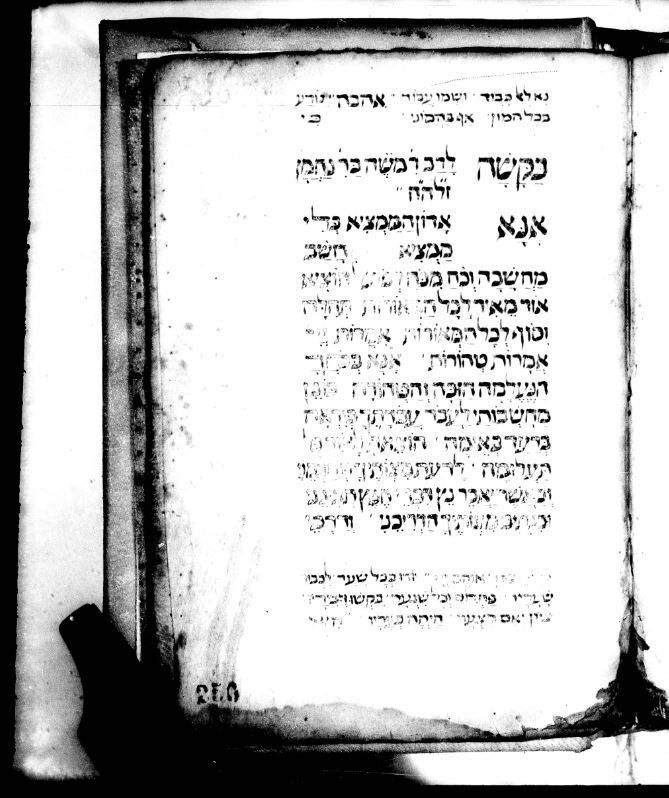 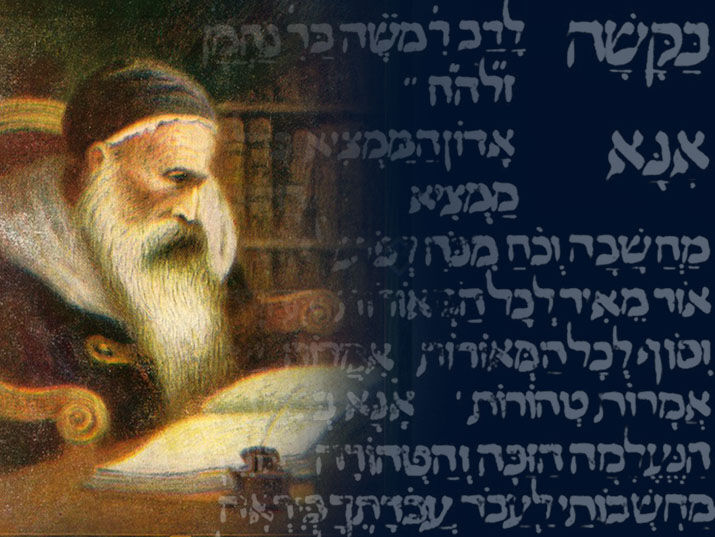 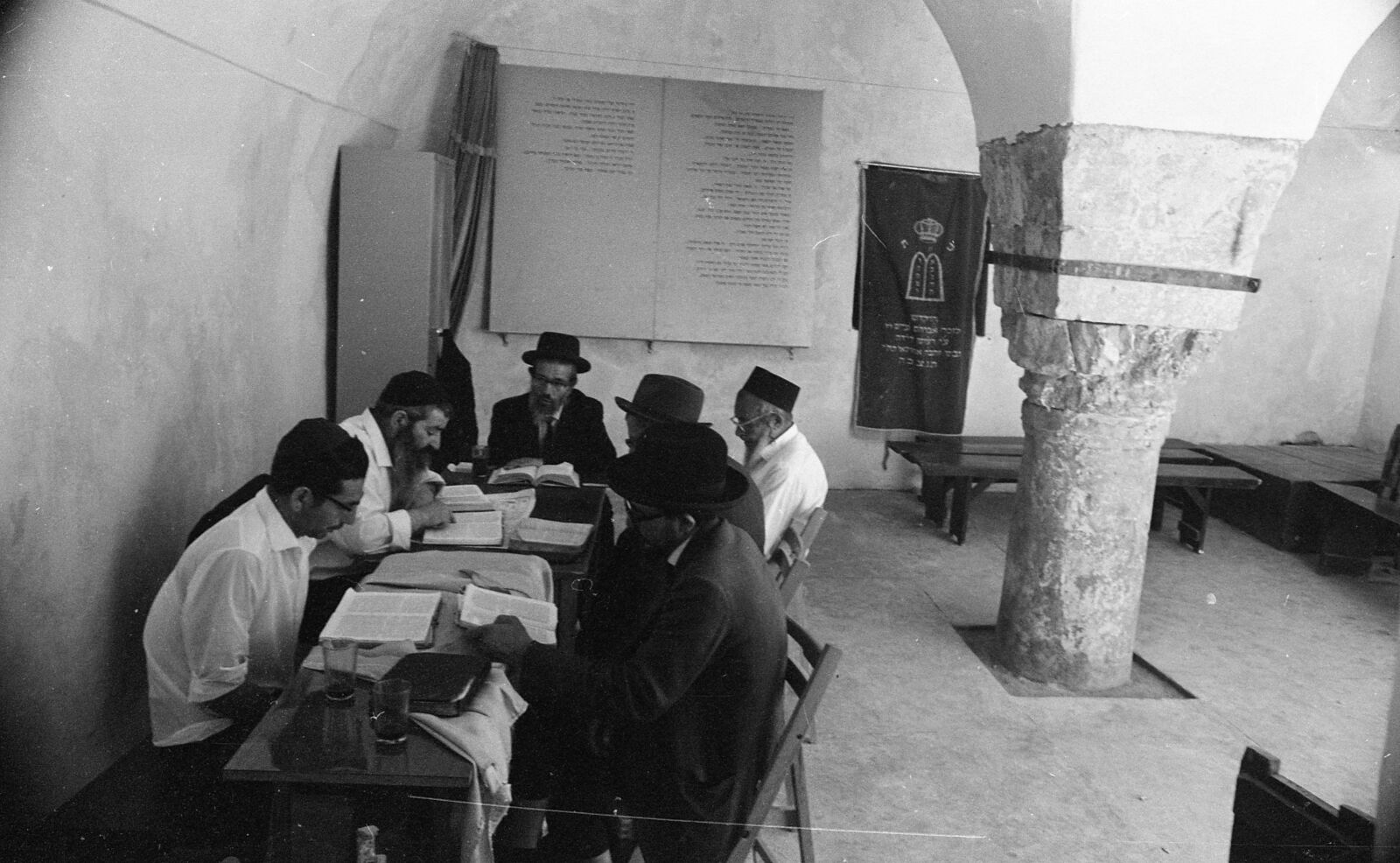 In time for the Jewish High Holidays, a recently unearthed poetic prayer attributed to the famous 13th century rabbi known as the Ramban (Nachmanides) has been translated into English for the first time, and is now available on the National Library of Israel's website.

Rabbi Moshe son of Nachman (b. 1194 in Catalonia, d. 1270 in Acre), more commonly known as the Ramban or Nachmanides, is one of the intellectual giants of Jewish history, the author of commentaries on the Bible, the Talmud and countless other texts, as well as an array of original works widely studied and cited to this day.

He was also a leading Kabbalist and a persecuted defender of his faith. Forced to leave Catalonia following a religious disputation when he was around 70 years old, the Ramban traveled across the world to the Land of Israel, where he helped rebuild Jewish communities and scholarship decimated by the Crusades, the Mongols and the passage of time. His arrival in Jerusalem marked the beginning of hundreds of years of uninterrupted Jewish settlement in the city and the synagogue he established still stands.

Just last year, a prayer attributed to the Ramban was printed for the first time, appearing in Dr. Idan Perez’s Sidur Catalunya. The work presents the first ever printed prayer book of the Catalonian liturgy and ritual used by the Ramban and the once thriving Jewish communities of Catalonia, Valencia and Majorca, which were ultimately extinguished by the Spanish Inquisition and Expulsion over 500 years ago.

Perez completed the monumental project by piecing together manuscripts and other source materials from institutions across the globe. The prayer attributed to the Ramban was found in a manuscript written just after the Expulsion, which was likely used by Catalonian exiles living in Provence. It is now held in Rome’s Casanatense Library, and is available online as part of “Ktiv“, the National Library of Israel-led initiative to open digital access to all of the world’s Hebrew manuscripts.

According to Perez, these types of prayers – referred to as “bakashot“, or “supplications” – were quite common among Iberian Jews of the period. Catalonian communities apparently recited them after the regular daily prayers, while other communities across the peninsula would say their bakashot before prayers.

“The text’s content and style, along with the fact that the manuscript’s author prefaced it with the words ‘A Bakasha of Rabbi Moshe ben Nachman’, all seem to indicate that this bakasha was, in fact, written by the Ramban himself,” says Perez, who heads the Rare Books Department at the National Library of Israel.

To the modern Hebrew speaker, the Ramban’s poetic prayer – written some eight centuries ago – is surprisingly clear. The English translation appears below, with a few notes and sources added in parentheses for clarification purposes:

Please, O Lord who creates without having a creator∙

And who conceived a thought and power from potential to action, brought forth light which illuminates all of the lights from the beginning until the end, for all of the illuminations∙

Please, with your unseen, refined and pure power, establish my thoughts in your service, in awe, in trembling and in reverence∙

You have brought to light every mystery∙

And in the ways of repentance (teshuva) instruct me∙

And the spirit of grace flows forth onto those who know and those who do not know, and in the attribute of your beloved ones from ancient times, bless me with sublime favor, as my absolute light∙

And this is your favor that you shall do for me∙

And raise me up on the balance of grace∙

And from their great light, enlighten me∙

And like the mountain of your inheritance (Jerusalem), bring me and plant me∙

And between two cherubs, may your word come and console me∙

And desire me and receive me∙

And may the foundation of your world establish my soul and may it be bound up in the bundle of life, the pure soul you have placed within me, and in the great all-encompassing crown, may it be included∙

Include me in your exalted attribute of goodness, with every blessing and splendor∙

Please, with these crowns, which are ten in number∙

And in them lay the secret to everything∙

May my supplication come before you∙

And may your ear be inclined to my joy∙

And may my prayer come before the sanctuary of your holiness∙

And from the good oil of the two olives and the wellspring, pour upon the seven candles of the entirely gold menorah (Zechariah 4:3)∙

And shower upon he who longs for your kindness and sees your goodness through spiritual channels from higher wellsprings and lower wellsprings (Joshua 15:19)∙

And you are the one who knows that I do not unburden my plea before you due to my righteousness, but rather by the merit of my forefathers I have based it, and by the greatness of your mercy and your humility and the memory of your thirteen attributes∙

About the National Library of Israel

Founded in Jerusalem in 1892, the National Library of Israel (NLI) serves as the dynamic collective memory of the Jewish people worldwide and Israelis of all backgrounds and faiths. While continuing to serve as Israel's pre-eminent research library, NLI has recently embarked upon an ambitious journey of renewal to encourage diverse audiences in Israel and around the globe to engage with its treasures in new and meaningful ways. This is taking place through a range of innovative educational, cultural and digital initiatives, as well as through a new landmark campus designed by Herzog and de Meuron, with Mann-Shinar serving as the Executive Architect. The new campus is currently under construction adjacent to the Knesset (Israeli Parliament) in Jerusalem, and is on schedule to be completed in 2021.

NLI has four core collections: Israel, Judaica, Islam and Middle East, and the Humanities. Highlights include significant handwritten works by luminaries such as Maimonides and Sir Isaac Newton, exquisite Islamic manuscripts dating back to the ninth century and the personal archives of leading cultural and intellectual figures including Martin Buber, Natan Sharansky and Naomi Shemer. The National Library holds the world's largest collections of textual Judaica, Jewish and Israeli music, and maps of Jerusalem and the Holy Land, as well as world-class collections of manuscripts, ancient maps, rare books, photographs, communal and personal archival materials, and more.

The new NLI campus, currently under construction adjacent to the Knesset (Israeli Parliament) in Jerusalem, is scheduled to open in 2022. The building and its surrounding gardens and plazas will reflect the central values of democratizing knowledge and opening the National Library’s world-class collections and resources to as broad and diverse an audience as possible. Within its 45,000 square meters (480,000 sq. ft.) of space, it will provide venues for exhibitions, as well as cultural and educational programming in a secure, sustainable and state-of-the-art environment. Partners in the building renewal project are led by the Government of Israel, the Rothschild Family through the auspices of Yad Hanadiv, and the David S. and Ruth L. Gottesman Family of New York.