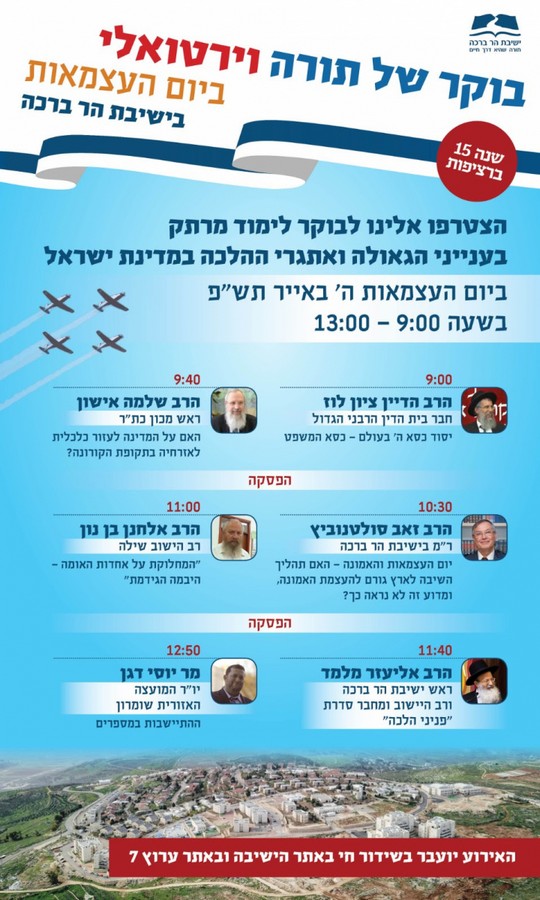 [email protected]
For all the videos go to: https://www.youtube.com/user/YHBVideo/videos

The spiritual leap in Israel-Diaspora relations: Love is all you need

Alas, for those itching for the “Settler ultra-Orthodox rabbi” versus “Reform rabba” rumble, that’s not who they are.

Refreshingly, on Sunday, at Makor Rishon’s First International Diaspora Conference, I had a profound revelation. Professorial types like me assume that unity entails negotiating our various differences. But I moderated a discussion between two religious leaders who showed that unity is a spiritual choice, requiring humility, expressing love. It’s a leap: either you’re committed to the Jewish people as a family – or you’re not.

Rabbi Eliezer Melamed has the big black hat and long white beard of right-wing Orthodoxy, and lives on a “settlement,” Har Bracha, in Samaria, the West Bank.

They’re supposed to hate each other. Heck, they’re not even supposed to sit down together. Klein admitted that until our prerecorded session was broadcast, he didn’t believe it would happen.

Fortunately, I had a sneak preview regarding the two grand souls he invited. We attended the Genesis Philanthropy Group -Diaspora Affairs Ministry’s pluralistic, international conference last September, Our Common Destiny.

When I met Melamed there – on the lunch line – I asked him what he does.

That would be like Maimonides introducing himself, saying, “I’m a family doctor” – omitting that it’s the royal family. Melamed is the Joseph Karo of our generation, an extraordinary halachist whose concise, comprehensive series Peninei Halacha (Pearls of Jewish law) is today’s go-to guidebook for living a religious Jewish life.

Horvilleur is equally modest – and mega-accomplished. Her national profile as a leading intellectual is such that she’s been inducted into France’s Legion of Honor.

Alas, for those itching for the “Settler ultra-Orthodox rabbi” versus “Reform rabba” rumble, that’s not who they are. True, you could sift through every public stand each of us has taken and find something we said you might hate – or we could have yelled about. We wouldn’t be doing our jobs if we didn’t occasionally take controversial stands, but we wouldn’t be serving our consciences if we didn’t also grow – and know how to put differences aside.

That’s what made the conversation magical.

I asked, “Why should anyone from ‘here’ care about someone from ‘there?’”

“I feel a sense of family,” Melamed said. “In bad times, we suffer a shared fate, and in good times we’re mobilized by a common purpose,” which he defined as bettering the world.

Refusing to articulate redlines, he said kindly, expansively: “If someone’s willing to sit together, let’s sit. I’m not saying there aren’t evildoers in the world, but why spend so much time trying to decide who’s outside the framework?”

“You should enter these interactions with much humility” – which both have in buckets – Horvilleur advised. Quoting the poet Yehuda Amichai, Horvilleur emphasized our brokenness, our superficial “fractures” amid our underlying “geological unity.”

So, of course, we could weaponize our differences. But, she said, discordant notes produce beautiful harmony.

Glancing at the bookshelves hulking behind me and Melamed, she said, “Look at those books, we’re all in conversation with our Jewish libraries,” elegantly emphasizing our unity while acknowledging that we relate to different books in different orders. To her, this is all “living in Jewish time.”

So she asks: Where are you coming from? How do you balance our shared heritage and our shared commitment to the future?

Last year, all the talk about boycotting fellow Jews – specifically “Hareformim, Haconservativim” – disturbed Melamed. He started wondering: “How can we do this to one another?”

Feeling there’s been “too big a gap,” overcoming his natural inclination to stay home and study, he decided: “I must meet my brothers and sisters. I must know them... so we can start learning from one another.”

Moderating is harder than speaking. While actively listening to each speaker, you have to keep strategizing about how to nudge the conversation ahead.

Initially, I worried everyone was too agreeable; I didn’t want another empty Kumbaya moment. But these people were too substantive not to talk substance. Ultimately, we analyzed the nature of the Jewish people’s apartness from others, how we balance our communal and individual selves, what happens as Diaspora Jews assimilate, how to avoid Israeli condescension, and Israel’s responsibility to every Jew – in good times and bad.

Listening to these two learned lovers of the Jewish people, absorbing their kindness, their generosity, I witnessed something profound. Each conveyed a simplicity, a sincerity and a sense of sanctity.

Sitting in our homes, stuck in those Brady-Bunch Zoom boxes pulsating with light as each one speaks, we ascended to Sinai, to Shiloh, to Mount Zion. We were in a modern 2020 conversation, but we also were swimming in a timeless, sacred Jewish peoplehood conversation, and I felt blessed to belong to this eternal, multidimensional dialogue, with these thinkers, these searchers, these spiritual giants, these friends.

The writer is the author of The Zionist Ideas, an update and expansion of Arthur Hertzberg’s classic anthology, The Zionist Idea. A distinguished scholar of North American history at McGill University and the author of 10 books on American history, his next book, Never Alone: Prison, Politics and My People, coauthored with Natan Sharansky, will be published in September. 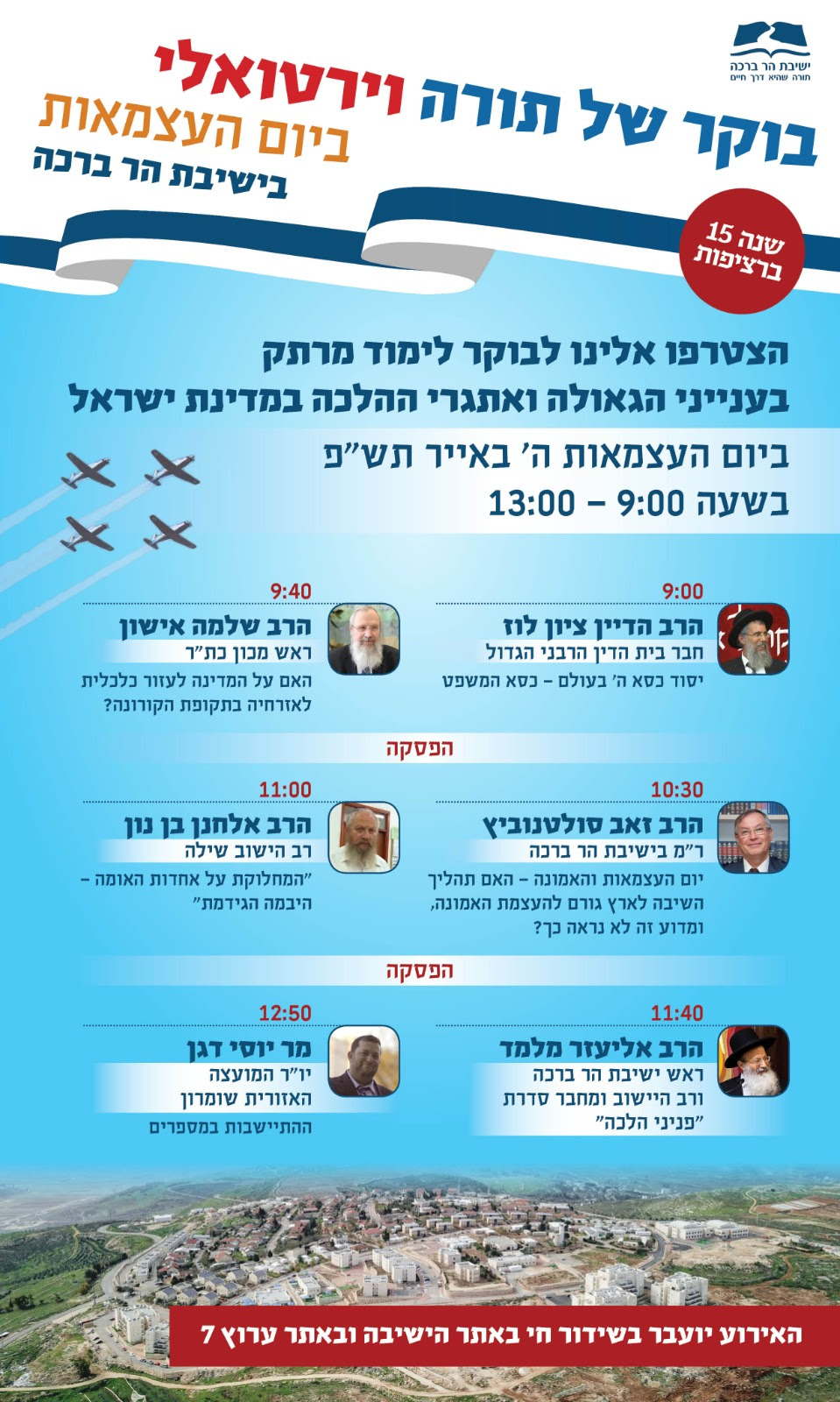 Links to all the videos:
https://www.youtube.com/channel/UCkwxRNj-7Iu1LlHJfKzl2Gw