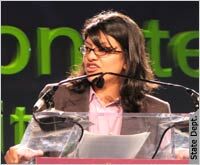 Michigan Congresswoman Rashida Tlaib is facing a serious challenge for her House seat from a pro-Israel Democrat affectionately referred to as a “gun-toting Detroit grandma” in a recent feature by the New York Post.

Since declaring her candidacy for Michigan’s 13th congressional district in February, Democrat Janice Winfrey has raised an impressive $200,000. Detroit-area political consultants describe that as an impressive amount for six-weeks, suggesting the 62-year-old long-time Detroit City Clerk is a viable challenger to Tlaib.

The Democratic primary is scheduled for August 2.

In an interview with Jewish Insider (JI) published on Tuesday, Winfrey accused Tlaib of being “more interested in political gain than she is in serving our constituents.

Winfrey also stressed her opposition to the Boycott Divestment and Sanctions campaign against Israel.

“I don’t say [Israel is] a perfect country, but I do know it’s an important country to Americans. I do know that, without Israel, we’re much, much weaker and vulnerable,” Winfrey said. “So how can we not support Israel?”

“I don’t care what your dislike is with the Jewish people, you don’t just wipe out a whole country, a whole group of people — that’s never the answer,” she said.

Winfrey also voiced support for the two-solution without pressuring Israel to make concessions.

“We must have confidence in Israel’s ability to determine what is best for her own security and well-being,” Winfrey said.

“While I support the U.S. conducting Middle East peace talks, the United States should not infringe upon Israel’s sovereign right to pursue peace accords best aligned with her national interests. The United States has a role to facilitate in peace talks, but not dictate them.”

A position paper issued by Winfrey slammed BDS, the United Nations and the International Criminal Court for “efforts… intended to weaken and delegitimize the Jewish State,” saying they will “stop at nothing to compromise the shared Israeli-American values.”

“You cannot hate a group of people and expect to serve a community or a nation or people period if you’re anti-anything,” she noted. “As an African American woman, it angers me to my soul that you hate another group of people just because [of who] they are… It grieves my soul and I will work against it, and I have always worked against it all my life.”

She also pointed to crime as a weakness for the Democrats, and for Tlaib in particular.

Crime “needs to be handled in a better way,” she said, adding that her neighborhood was locked down because of a shooting the same morning she spoke to JI.

Winfrey recently told the New York Post that her district has become so unsafe, she bought herself a .22 caliber pistol.

“I can’t go to the park by myself anymore and that is concerning to me,” she said. “I would like not to have to carry the gun. I don’t want the gun in my house. I have a 2-year old granddaughter. It’s locked in a safe in a closet on the top shelf. I don’t like it. We don’t believe in that, but I have to feel safe.”

Winfrey has served as Detroit City Clerk since 2005.

Tlaib, who amplifies the Palestinian narrative and has been repeatedly accused of antisemitism, is a member of The Squad, a group of Democrats, including Ilhan Omar (D-Minn.) and Alexandria Ocasio-Cortez, who face accusations of anti-Israel and anti-Jewish bias.

Tlaib supports BDS and calls Israel an “apartheid” state. She and Omar were barred from entering Israel in 2019 over their support for BDS.