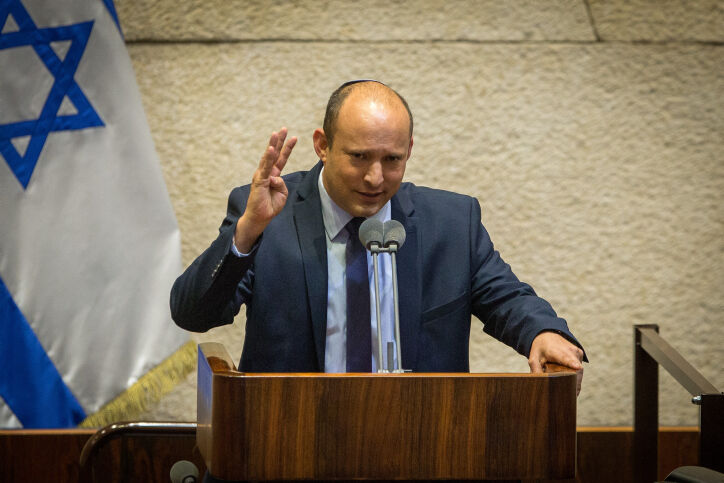 The sudden popularity of Naftali Bennett and the strengthening of Israel’s right-wing in recent polls could alter the face of Israeli politics for years to come.

A constant stream of political polls gives clues to the stability of Israel’s current unity government anchored by Benjamin Netanyahu’s Likud Party and challenger Benny Gantz’s Blue and White Party. The two opposing parties united in April to put an end to a bitter three-election campaign cycle and deal with the coronavirus crisis.

While Israel has had low mortality rates as compared to the United States, Europe and elsewhere, many Israelis are expressing a lack of satisfaction in the government’s management of the crisis.

The unity government is glued together by a rotation arrangement between the coalition’s central parties, in which Gantz is scheduled to take over as prime minister in November 2021. Yet the likelihood that Netanyahu will gracefully part the premiership is slim. In the six months since the government was formed, Blue and White has served as an opposition within the coalition. Defense Minister Gantz, and Blue and White No. 2 Foreign Minister Gabi Ashkenazi, have been relegated to the sidelines by Netanyahu. And an ongoing budget crisis may automatically topple the government and trigger new elections in the coming weeks, without the premiership being handed to Gantz.

Netanyahu may attempt to jettison Blue and White, and retool his coalition with other parties, or push towards a fresh national election prior to next November.

A new election is likely to bring about a political realignment. Based on current polls, Israelis no longer see Gantz as the most viable alternative to Netanyahu. Nor do they view current opposition leader Yair Lapid as prime ministerial material.

Rather, a growing number of Israelis have been expressing newfound favor for longtime right-wing national camp leader Naftali Bennett. Bennett, who served briefly as defense minister prior to the formation of the unity government, opted to take his small six-seat Yamina Party into the opposition, rather than accept a demotion and serve in a Likud-Blue and White government as a junior coalition partner.

While defense minister, Bennett had lobbied to personally lead the national effort to fight the COVID-19 pandemic. Yet he was consistently rebuffed by Netanyahu, who was not intending to keep Bennett in the senior defense post. Since heading to the opposition, Bennett has relentlessly and pointedly attacked the government’s handling of the pandemic.

The strategy has made Bennett appear as one of the few responsible politicians interested in seriously addressing Israel’s most serious problem. Meanwhile, Netanyahu’s other opponents—both from within the coalition as well as the opposition—continuously bicker over tactical political maneuvers and the prime minister’s fitness to hold office while on trial for questionable corruption charges.

Bennett’s positioning has been particularly popular among two key constituencies: Israelis who are eager to replace Netanyahu at any cost; and staunch nationalists who don’t see Netanyahu as an authentic right-winger. According to the recent opinion polls, Bennett’s Yamina Party could be on track to leapfrog up from six seats to 23 mandates, second only to Likud, which appears to be trending downward from its current 36 seats to just 26 mandates.

Netanyahu addressed the polls this week in a Likud faction meeting without expressing much concern, stating, “I never succeed in the polls, only in the elections.”

For voters whose singular issue is to replace Netanyahu at any cost, Bennett may simply represent the next in line of politicians attempting to ouster Israel’s longest-serving prime minister. Yet the fact that the most likely political candidate now comes from the right side of Israel’s political spectrum may represent the beginnings of a more important paradigm shift.

For the past 11 years, the political left-wing has proven incapable of unseating Netanyahu. Israel’s once large and proud Labor Party—the longtime major left-wing political force in Israel—is virtually non-existent today. Similarly, Netanyahu succeeded to break the center-left Blue and White Party in half prior to Gantz’s joining a Likud-led government, with Lapid taking his faction of the party into the opposition.

Israel’s political left-wing will attempt yet another realignment should Israel head once again to the polls. However, in throwing early support towards Bennett, opposition votes are seemingly moving even further to the right of Netanyahu.

In the most recent polls, right-wing and religious parties would receive a large majority of 70 mandates out of 120. The Joint List of Arab parties—self-proclaimed anti-Zionists, and the only Knesset members to oppose Israel’s peace treaties with the United Arab Emirates and Bahrain—polls at 15 seats. This leaves only 35 pro-Israel mandates to the left of Likud.

The political shift represents the slow and painful crushing of Israel’s left. Since the formation of the current unity government, the left has led large protests against Netanyahu often with upwards of 20,000 protesters. Yet despite the wishes of the protest organizers, the movement has failed to become mainstream.

Photos and videos of the protesters clearly identify them as the left fringe of Israeli society. And protesters’ insistence on gathering in the thousands as most Israelis attempt to avoid crowds and maintain social distance due to the pandemic has done little to ingratiate the movement with Israelis overall.

In the past, Netanyahu detractors would have been unwilling to consider placing their faith in a right-wing candidate. For decades, right-wing politicians have focused their political energy on hawkish defense positions, the building of settlements and strengthening Zionist education. Bennett’s shift toward dealing with a nationwide concern outside the realm of security has made the right-wing appear less extreme and more in touch with the will of the mainstream.

Prior to the coronavirus, Bennett has long suggested that Israel formally annex all of “Area C”—areas under Israeli administrative and security control according to the Oslo Accords—generally considered to be a hawkish position. Perhaps in a bid to win right-wing votes, Netanyahu promised to declare sovereignty in 30 percent of “Area C” in the last elections. He then was forced to place the sovereignty bid on hold, with the signing of the Abraham Accords with the United Arab Emirates and Bahrain, after losing the Trump administration’s present support for the initiative. A Biden administration would be even less enthusiastic about Israeli declarations of sovereignty in the disputed territories.

As such, Bennett’s right-wing views on sovereignty are currently held in check by external forces.

In the recent election cycles, many right-wing voters cast their ballots for Netanyahu out of fear that a Netanyahu loss would usher in a left-wing government. Yet today, many longtime Likud voters are taking issue with extended lockdowns that are causing irreparable damage to many small businesses. Many have evaporated their savings and gone into large debt to keep their businesses afloat, while many others have been forced to shut businesses down for good.

Bennett has repeatedly insisted that better management could have averted the latest lockdown. The message has resonated with many who have watched the governments’ ugly political arguments over constantly changing coronavirus regulations.

He may be successfully positioning himself as the heir apparent to Netanyahu. Members of the opposition would gladly offer a king’s ransom to enter a Bennett-led government that would end Netanyahu’s reign.

At the same time, an alignment of the two largest parties both being on the right of the political spectrum may further strengthen Netanyahu for additional years at the helm.

A strong right-wing government could impact Israeli policy in a host of diplomatic and security issues, including a future conflict with Iran or its proxies in the region and potential negotiations with Palestinians, as well as socio-religious issues, including whether or not greater numbers of religious men will be drafted into the army.

In this period of great unknowns, whether Israel will plunge into another round of elections in the coming months remains to be seen, as does the longevity of Bennett’s current popularity. Yet the apparent strengthening of Israel’s right-wing at the expense of the left has the potential to alter the face of Israeli politics for years to come.

Caption: Yamina leader Naftali Bennett speaks during a Knesset plenary session at the Knesset in Jerusalem on August 24, 2020.
Photo by Oren Ben Hakoon.