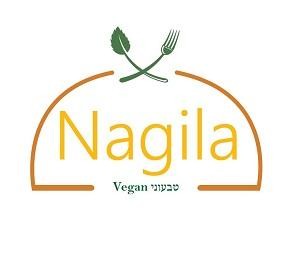 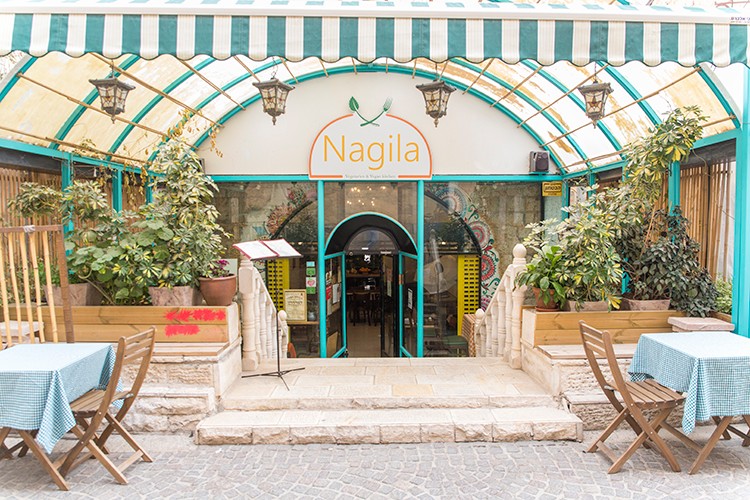 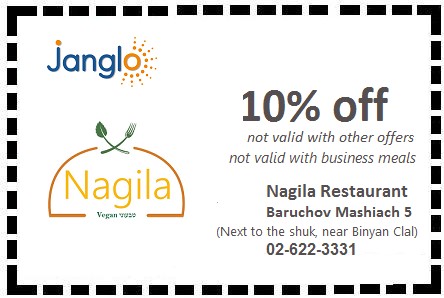 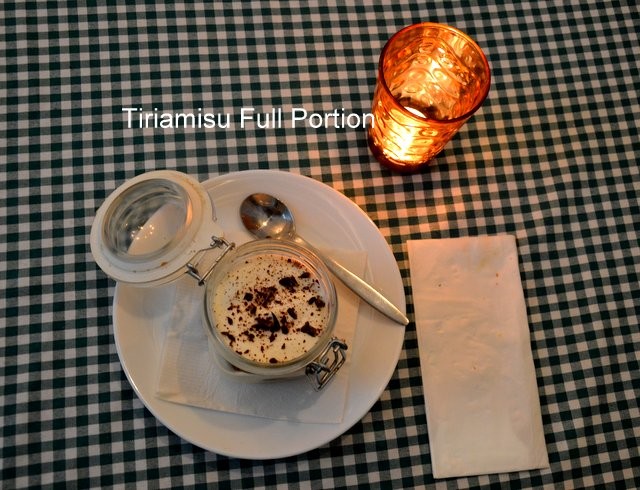 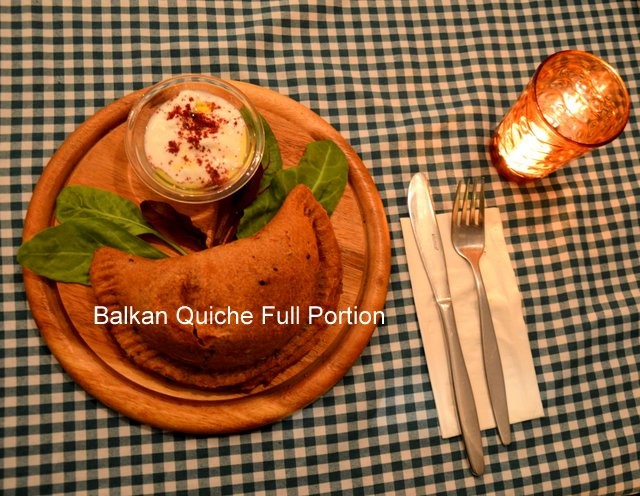 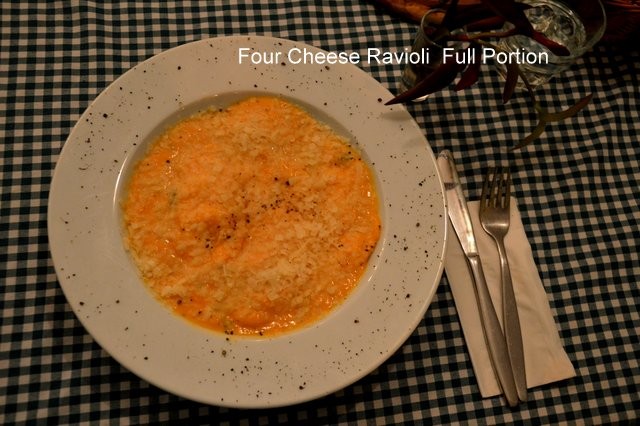 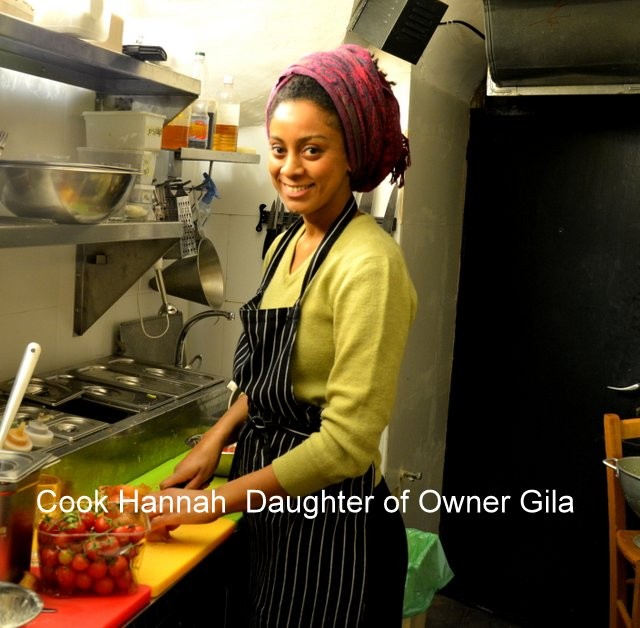 02-622-3331 [email protected] http://www.nagila.co.il
Mashiach Barukhof 5 (Near the Shuk)
When Gila Foldes's young daughter had her Bat Mitzvah, she and her older daughter, Hannah,  decided to prepare the food themselves.  They received so many compliments, another friend asked them to do the food for her Bat Mitzvah. This gave them the idea to do something serious with food.  The result was the opening of Nagila (Let's Be Happy) last April.
Nagila is located off Agrippas, in the alley between Agrippas and Jaffa Road, below the alley after Maccabi pharmacy.
Walk down a few stone steps with a stone bannister to hold and you are facing a glass front with picture windows on each side.  Stepping onto the tile floors, you  feel immediately the atmosphere of a very old stone house with typical Middle Eastern arches.
Pictures on the walls feature a local artist, change to another artist at least once a month, and are for sale.
Wood tables, covered in checked tablecloths, seat 22, but for an event, this room will seat 45. At the back are two handsome bars with flower arrangements in the middle and fresh fruit and vegetables--one made from oak seats six at bar stools; the other bar is made from eycalyptus--both hand-made by Gila's husband with wood from the Golan Heights. A smaller bar to the left, also wood, is a work station for the wait staff;  the kitchen is in the back.
Gila's daughter, Hannah, who says she has liked to cook since she was a little girl, is the cook.
We did not try the breakfasts, but it is available in two sizes (NIS45/NIS80) with a choice of eggs, omelet or shakshuka as well as the usual salads, dips, bread and beverages. Also, on the menu, with the breakfast listings are four sandwiches (NIS28 to 32 NIS); and three pastries (NIS 38) served with salad and yogurt/tchina.
Fresh juices, soft drinks, coffee and tea are also available.
On the main menu, under appetizers are--soup in two sizes (NIS18/NIS25); meze (NIS 20) and grilled eggplant (NIS22).
Hannah started us off with her home-made, whole-wheat bread. which is vegan and contains no eggs, made today in the shape of little mini rolls but sometimes as a four-slice, small bread. Accompanying this were glass dishes of six dips--matbucha (cooked tomatoes with roasted bell peppers, garlic, and chili pepper) Kalamata olives, green tchina, salsa, pesto, and amba (mango and spices condiment). These were larger portions than most dips and were very different than dips often given with bread; they were larger since they were to accompany the bread and the salad.
Of the 4 salads on the menu in two sizes, we were served the full portion of the smaller size of Nagila Salad (NIS25/NIS45), a nice blend of varied lettuces, rocket, cherry tomatoes, walnuts, and green apples, with a large chunk of feta cheese on top and a very light citrus vinaigrette.
Eight main courses are offered on the menu--each with a small side salad (NIS40-NIS57). Hannah wanted us to try the full-size, Four Cheese Ravioli (NIS 62), served in a large soup bowl, garnished with black pepper. This "melt-in-your-mouth" ravioli was flat and pancake shaped in a superb creamy sauce. It was definitely innovative and a reason to return Nagila to order it again. My companion said it was the best ravioli he had ever tasted!
Another unusual main course was the full portion of Coconut Curry Stew with potatoes and chick peas (NIS55) served on whole-wheat couscous. The curry taste is subtle, and the couscous was exceptionally light.
The last main course we tried was the crescent-shaped, very unusual Balkan Quiche (NIS38) in a whole-wheat crust, with sweet potatoes, mushrooms, onions and cheese inside, sitting on mangold (Swiss chard) leaves with a yogurt dip, and side salad.
On the dessert menu are usually three cakes and ice cream (NIS25-35), but we did not even ask what kind when Hannah offered my favorite dessert--Tiriamisu (NIS32). Served in a glass jar with a lid, the mascarpone cheese, cream, biscotti and espresso were utterly delectable.
A large number of the menu items are vegan but for those who enjoy a delicious, inventive vegetarian breakfast, lunch or dinner, Nagila is definitely a place to visit often.
P.S. There are special menus for groups of 30 or more for lunch (NIS 60 per person) and dinner (NIS75 per person).
Share:

Great Food! Great Taste! HEALTHY!! Good atmosphere! Rabbanut Mehadrin! My wife and I enjoy going here b/c we know everything is tasty

Nagila is by far our favorite restaurant in Jerusalem, and we are not even vegetarians... The food is tasty, fresh and healthy, and surprisingly inexpensive. The service is always pleasant and welcoming. Our tip - we like many dishes but always order the cashew cheese lasagna first. Highly recommended!