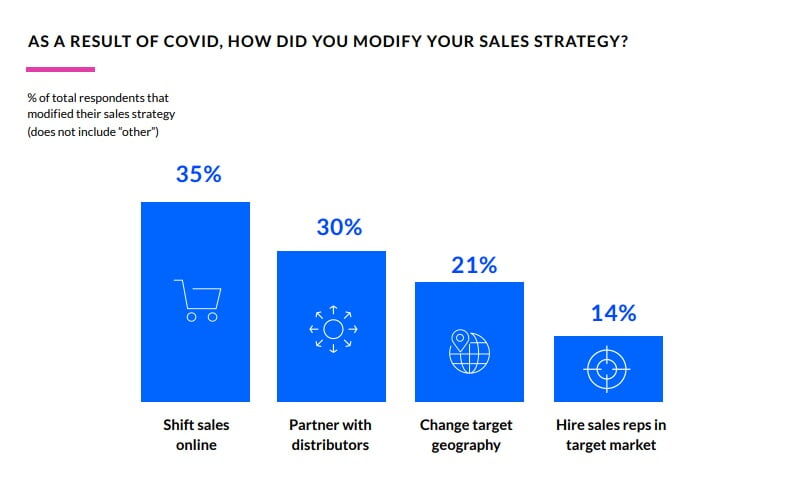 A majority of Israeli startups have been adapting relatively well some nine months after the COVID-19 pandemic hit Israel, embracing work-from-home (WFF) models, pivoting their products where relevant and growing their sales efforts. But they still face some key struggles, a new report has revealed.

According to the survey, startups and the entrepreneurs behind them have shown flexibility and quick thinking, with 87 percent of the respondents saying they adopted remote working frameworks and expanded their hiring pool, 60 percent tweaking their sales strategies to focus on digital channels, and 55 percent adapting their products and/or adding new features. At the same time, 44 percent have reported difficulty pitching themselves virtually, with early-stage startups facing a particularly hard time, the Startup Snapshot survey has shown.

The report, released this month, was put together by Y.Benjamin Strategic Marketing, LeumiTech, a subsidiary of Bank Leumi, the legal firm Yigal Arnon Law, and Intel Ignite, the early-stage startup growth program by Intel. It surveyed over 200 Israeli startups, over half of which raised $10 million or less, and over 70 percent of which were generating revenue.

Yael Benjamin, founder of Y.Benjamin Strategic Marketing, tells NoCamels that the current reality presents a “lot of challenges but it’s also opening up a lot of opportunities.”

She points to the report’s findings that showed that 44 percent of the respondents reduced their office space or canceled leases in spaces and a majority looking to sustain their remote work models, even if partially, even 12 months post-pandemic.

“Israeli startups are doing what they do best – adapting,” Benjamin wrote in the report. “They are taking rapid strides to adjust to a new world, one in which they must acquire clients, manage deployments and raise funds from behind a virtual screen thousands of miles away.”

The capabilities, she says, may create competitive, long-term advantages and strengths for the Israeli tech ecosystem that “flatten the world.”

Delving deeper into the report, the findings show that at least half of the startups view employee location as less important, and 30 percent have increased their outsourcing.

Around April, says Benjamin, everything froze with companies freezing new hiring, putting people on furlough and even starting rounds of layoffs.

“They didn’t know which way to go and here [in this report] we see how the startups are adapting… A large percentage of them say they’re increasing reliance on outsourcing and they are saying that employee location is not important anymore,” she says.

“So that’s kind of the rise of the truly global remote workforce. [The startups] are adapting and taking advantage of new opportunities, they’re understanding how the new landscape will look,” Benjamin tells NoCamels.

At the same time, there’s been a negative impact on company culture and – possibly – employee motivation.

According to the report, a majority of respondents said company culture was suffering or partially suffering as a result of working from home for so many months, even as most said productivity has stayed the same or gone up slightly.

Intel Ignite General Manager Tzahi (Zack) Weisfeld tells NoCamels there are many discussions in founder and entrepreneur circles about building and preserving company culture in these times, and “it is almost impossible.”

“It’s very hard to innovate in a vacuum. The lack of conversations at the water cooler or the coffee stand is having a huge impact,” he says. They limit the flywheel effect of new idea creation,” he wrote in the report.

Those whiteboard sessions where people build a concept or idea together, for example, are missing and there are lost opportunities, Weisfeld explains.

“We’re losing something that was unique to the Israeli ecosystem – and that was loyalty to the workplace, to the company, he says.

He tells NoCamels he believes that even those startups who gave up their offices will need some sort of space to get together eventually and have a few “together” sessions a few times a week to rebuild that cohesiveness and spark innovative ideas.

According to the survey, startups have also adapted their sales and product strategies in light of the pandemic, forcing their teams to experiment more and go down unbeaten paths.

Some 60 percent of the startups surveyed said they modified and diversified their sales operations due to COVID-19, and 55 percent changed or considered changing their product. Of those, 75 percent added new features, and 25 percent implemented substantial product changes.

In the sales department, startups have accelerated their use of digital channels, with 64 percent saying they have used more digital platforms for sales strategies and client support and engagement. Furthermore, despite the pandemic, a majority of the respondents – 69 percent – did not change or even increased their sales budgets.

Robert Cohen, a managing partner at Benson Oak Ventures, wrote that the use of digital sales channels “represents a growing opportunity for Israeli startups to ‘level the playing field’, reaching global scale in a cost-efficient and data-focused manner.”

“Iconic companies are not created from slowing down or avoiding risk. To win in today’s market, founders must play offense, making bold moves when others pull back,” said, Gigi Levy-Weiss, a leading Israeli entrepreneur and general partner at NFX.

“Startup founders are some of the most innovative people there are,” said Yifat Oron, CEO of LeumiTech. “While we continue to see the effects of COVID-19 in every aspect of life, it is amazing to see how these entrepreneurs have been able to cope in the most trying times. The qualities that startups must have in order to build their companies are exactly what will help them survive during and after the pandemic.”

The pandemic may not have heavily impacted fundraising for Israeli companies, with a new quarterly record of $2.74 billion raised in 151 deals in Q3 2020 – up 26 percent from Q2 2020 and 24 percent from Q3 2019, according to the IVC research center – but the global crisis has further deepened the uncertainty of the fundraising process – from the pitch to the investment size and valuation, according to the report.

This is especially true for early-stage startups that are already feeling the crunch.

Some 30 percent of founders of early-stage companies that had already raised $10 million or less reported smaller investments and 38 percent reported less interest from international investors.

Among the respondents, 46 percent said they found it more difficult to close deals when pitching virtually.

Accelerator programs, too, have seen drastic shifts and must adapt their offering to fit today’s evolving startup needs, the report stated.

“The accelerator model hasn’t evolved properly,” Weisfeld of Intel Ignite tells NoCamels. “Accelerators have become co-working spaces with a few lectures” and these programs need to be more customized and tailored to have real value, he says.

“We have to meet the startups where they are,” Weisfeld says, and offer to address the unique challenges they face. Some may need help pitching and telling their story over Zoom, others may need help uniting and focusing the founding team, he explains.

“These are new times for everyone and things are changing constantly; everyone needs to make the changes as the markets shift while leaving some room for error,” he concludes.