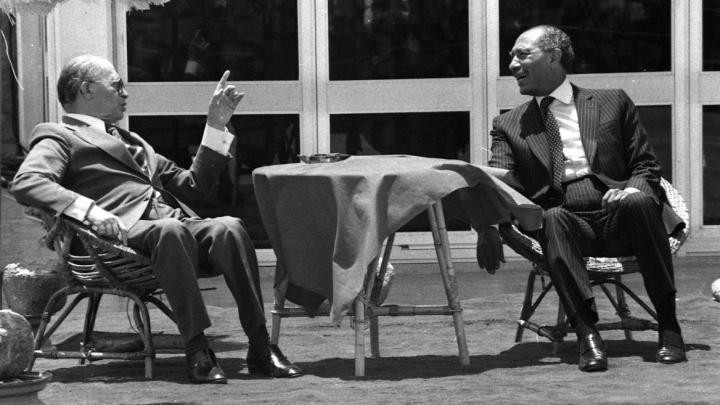 March 26, 2019 marks the fourth decade since the signing of the 1979 Israeli-Egyptian Peace Treaty. It is a bittersweet anniversary. Relations between Israel and Egypt have long been described as a “cold peace” with little person-to-person contact – so different from the euphoria of the early Eighties when Israelis rushed en masse to visit the country that had once been a bitter enemy.

That spirit was perhaps best exemplified by the two leaders at that time, Israeli Prime Minister Menachem Begin and Egyptian President Anwar el-Sadat, who – in addition to sharing the 1978 Nobel Prize for Peace – shared a friendship that extended beyond the confines of formal diplomacy.

In honor of the 40th anniversary, the National Library of Israel has released a series of photographs documenting Begin’s visits to Egypt. During the negotiations with Egypt and in the years following the signing of the agreement, Begin came to Egypt several times. Betwixt and between the crowded meeting schedule, the Israeli PM managed to tour some of Egypt’s most famous historic sites: the Pyramids of Giza, the Aswan Dam, the temples of Abu Simbel and the tombs of the Pharaohs in the Valley of the Kings. 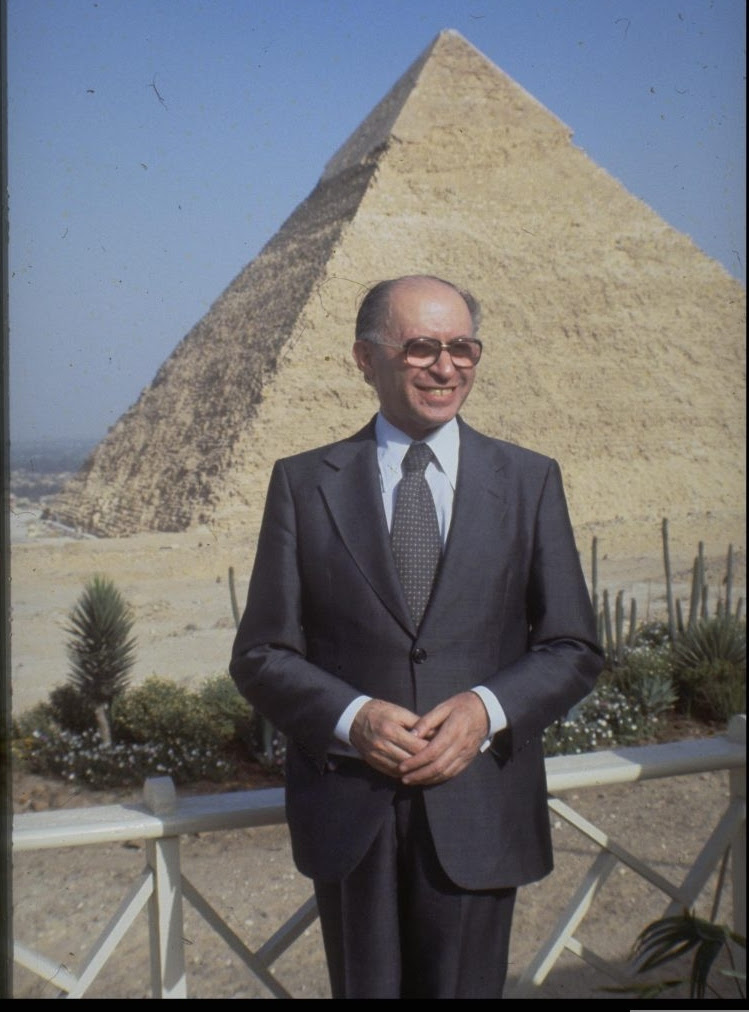 According to photographer Dan Hadani, who accompanied the Israeli entourage on one visit, “It was impossible to describe the excitement that gripped us when we suddenly saw the pyramids from the plane. To think of the Children of Israel who were slaves in Egypt… it was like a dream.”

Hadani also captured the warm relations between the two leaders, notes NLI Israel Collection curator Dr. Hezi Amiur. “Our collections hold countless resources related to the historic peace agreement, including posters, newspapers, correspondence, and official publications; yet the unique contribution of these photographs is that they provide an unmediated look at the remarkable personal relationship between Begin and Sadat.” Sadat was assassinated on October 6, 1981. Begin attended the funeral of his friend. He then forged ahead, continuing implementation of the agreement, withdrawing from the Sinai Peninsula in April 1982.

But it was a lonely task. In the book Peace in the Making: The Menachem Begin – Anwar Sadat Personal Correspondence, authors Harry Hurwitz and Yisrael Medad write:

“Begin was to mourn Sadat’s assassination not only because he had lost a peace partner but equally because he had lost a true friend. With pained nostalgia he confided to us, his personal staff, ‘Anwar and I used to open up our hearts to one another. Often we would speak about our beliefs and our ancient traditions, and our experiences, and how they impacted on our lives and made us what we are.

‘And then we laughed and embraced, and we said to one another with true affection that while we will inevitably go the way of all flesh, our nations will never pass away, and neither, with the grace of God, will the peace.’ Begin and Sadat share a toast on Jan. 8 1980, after the first El Al flight to Egypt. Photo by Dan Hadani – Dan Hadani Archive/National Library of Israel

“In time, the peace between the two countries did cool under the tutorship of Hosni Mubarak, President Sadat’s successor, and Menachem Begin was heard to sigh, ‘Were Anwar still alive today, things might have turned out a little different.’”

Forty years on, despite the lack of warmth between the two states, cooperation in both commerce and defense today exists on a major scale. 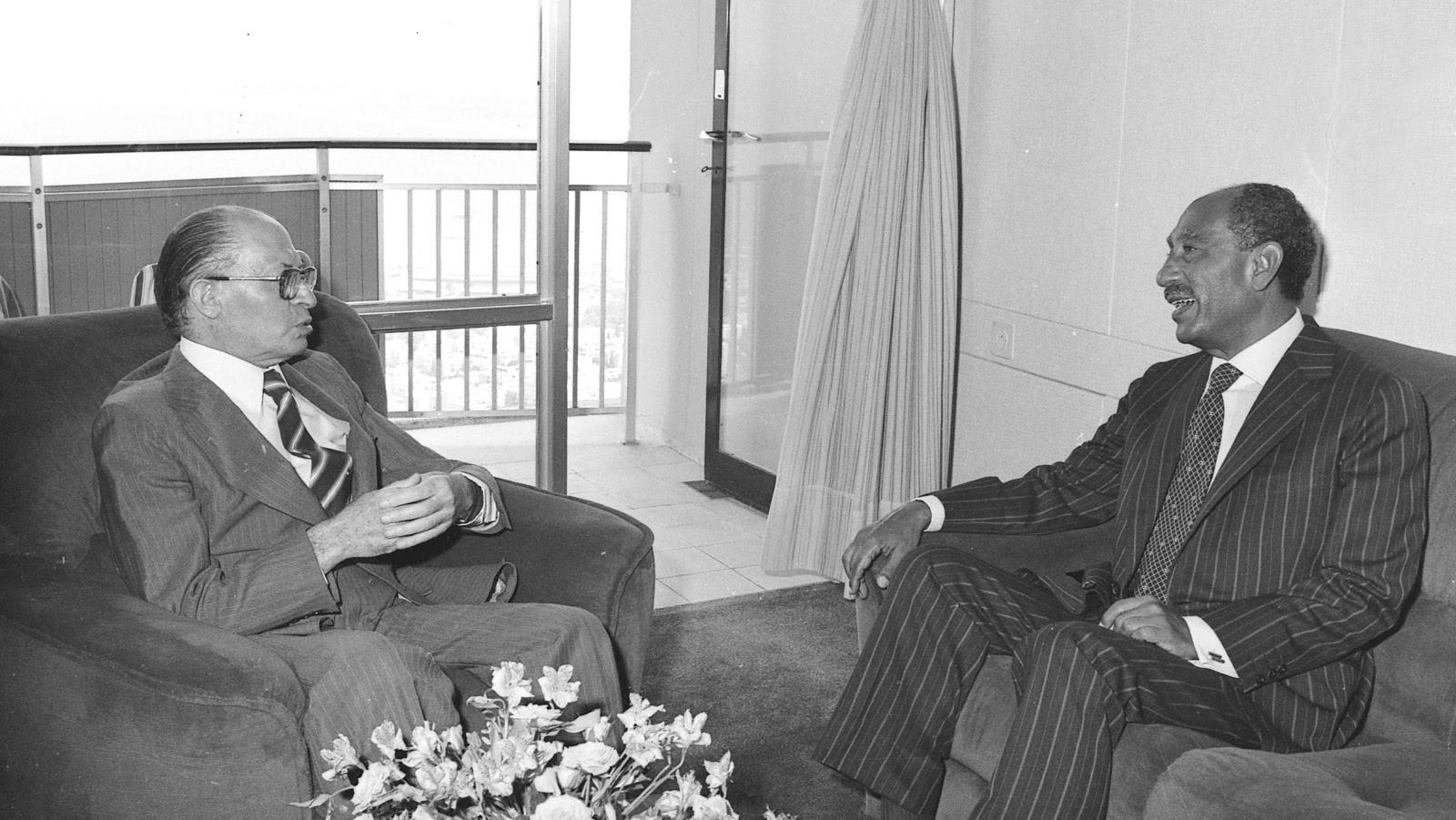 In a January interview with CBS News, Egyptian President Abdel Fattah al-Sisi stated that his country and Israel were cooperating to drive Islamic State militants out of the Sinai Peninsula. This week brought news reports that Delek Drilling, owned by Israeli billionaire Yitzhak Tshuva, is mulling purchasing shares in an Egypt liquefied natural gas (LNG) plant, another indication that the two countries are strengthening economic ties.

In addition – for reasons as yet unrevealed – in 2016, Israeli Prime Minister Benjamin Netanyahu approved the sale of four German submarines to Egypt. The next chapter in Israel-Egypt relations remains to be written.

The National Library houses the Dan Hadani Archive, a collection of almost one million images and negatives from the Israel Press & Photo Agency, founded and run by Hadani from 1965 until 2000.