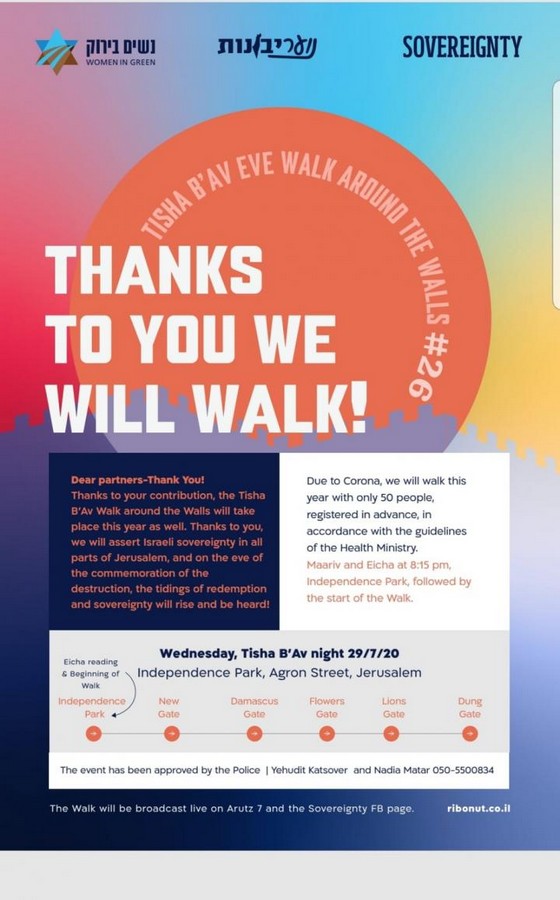 Yearly Tisha b’Av event to be held - with

The yearly Tisha B’Av Walk will be with only 50 participants. There will be a live broadcast

on Arutz Sheva for everyone who cannot attend. The yearly Tisha b’Av walk around the walls of the Old City of Jerusalem, organized by the Women in Green, will be held this year, despite the ongoing coronavirus pandemic.

However, this year, because of government restrictions, only fifty people will be able to participate instead of the many thousands who have gathered on this special night for the past 26 years.

In order to share the event with the many who would have liked to participate, the walk will be broadcast live on Arutz Sheva, including, as it does every year, historical commentary on various points of interest throughout the route as well as an assembly at the conclusion, albeit, limited in scope.

The person who has offered legal support from the start and was actually responsible for obtaining permission for the walk 26 years ago, was Atty. Prof. Aviad HaCohen, who, in conversation, brought us back to the legal battle that ultimately led to the renewal of the traditional walk.

“It is quite an ancient tradition. There is testimony of the centuries-old tradition of encircling the walls of the Old City on the eve of Tisha b’Av and mourning the destruction of the Temple and the city. When the population in the Land dwindled, there was a hiatus in the tradition. The person who renewed the tradition was Prof. Ze’ev Vilnai. Many hundreds of people participated in the walk. This walk united all of the sectors of society. This continued for many, many years. In 1948, when the Old City fell the tradition ceased”, Prof. HaCohen summarized the history of the walk in previous eras.

And from there to our days: “In the beginning of the nineties, Women in Green, led by Nadia Matar and her in-laws, Ruth and Michael Matar, and afterward Yehudit Katsover, decided to renew this tradition. In 1994, they contacted the police to receive permission because it is a procession of hundreds of people in a sensitive area. Surprisingly, the police claimed that the walk could not be held because it would be a danger to the public safety and there was concern over riots. I appealed on behalf of Women in Green and explained that it is a basic right and part of freedom of expression and perhaps also freedom of religion, since the walk was a renewal of a tradition. The police were not convinced and refused to allow it”.

“There was no choice but to appeal to the High Court. In the appeal, we included a survey of the history of this tradition, that it was not something new and if there was any concern about rioting by some of the residents, what the police had to do was not to forbid the walk, but rather to punish anyone who thinks that by using violence, he can prevent people from walking in the streets of Jerusalem”.

Prof. HaCohen continues, stating: “Fortunately, the panel of judges, President Shlomo Levin, Judge Eliezer Goldberg and Judge Eliahu Mata, issued an absolute order, which is quite rare in the High Court, since usually, out of the thousands of appeals to the High Court, 95 percent are rejected. In this case, the court changed the decision into an absolute order, stating that freedom of expression outweighs the concern over disturbances of order, but required a few conditions. One of the nice conditions was that since it was Women in Green and they wanted to be able to identify the participants of the walk, everyone who belonged to the walk was to wear a green hat as an identifying sign.

HaCohen emphasizes it was indeed rare for the court to make such a requirement, but it was done to prevent anyone from sabotaging the walk and creating a provocation by infiltrating it, as has happened on other occasions.

Prof. HaCohen continues, noting that throughout the years he has recommended to the movement’s leaders, Yehudit Katsover and Nadia Matar, to contact the police beforehand to prevent a last-minute prohibition. He adds that “In some years, the police tried to make arbitrary decisions, for example when the walk fell in the month of Ramadan. The police claimed that there was increased danger but even then, we insisted and succeeded to convince the police, which “gave in” and allowed the walk to proceed”.

Eighteen years later, the movement again had to appeal to the High Court. It was after the police had sought to prevent the walk from following its usual route and demanded that the participants of the walk proceed only in the western part of the city, which would have negated the purpose of the walk, in Cohen’s words. “There was no choice but to appeal again to the High Court and this time the police acceded without a battle as soon as the appeal was served. In this case, we did not waive the court costs, not only because it was an expensive process, but also on the level of principle, since the police should behave the same way toward all demonstrations. The court, in a relatively rare step, issued a ruling on court costs in favor of the movement”.

In light of these things, Prof. HaCohen was asked whether the requirement that there would be no more than fifty participants in the walk is not a case of the Walk around the Walls being treated differently from other demonstrations, such as those in Balfour Street, where hundreds, and even more than that, crowd together and the police do not lift a finger.

“I agree in principle. Fifty people is really a risible number. Even when demonstrations are limited, the numbers are different. But the organizers of the walk did well in not wanting to take risks. No one would want people to be endangered by corona in order to have the walk. They acted responsibly and this will be seen favorably. Going to the High Court would perhaps have resulted in a higher number but the goal is to express our attitude toward the destruction of Jerusalem and is not only a matter of numbers”.

Women in Green says that the permission to hold the walk was given only because it is a tradition of many years.

The public is invited to join online. The evening will start at 8:30 pm Israel time with the reading of the Lamentations in Independence Park followed by the Walk. Throughout the route of the walk, there will be explanations and stories about various historical points from various eras in the history of the People of Israel. The walk will conclude with an assembly attended by public figures and the screening of a video with greetings and encouragement sent by public figures who were not able to attend because of the restrictions of the Ministry of Health. “Although the walk and the assembly will be held in a limited format, the message of the People of Israel’s sovereignty over all parts of Jerusalem will be conveyed in the field as well as to the many who will watch the live broadcast on Arutz Sheva and on our Sovereignty FB page”, says the movement.

VIDEO in English: Yishai Fleisher on Yes to Sovereignty! No to Palastine!

Looking for wigs in any condition to give away for free

Are you a frustrated 1960's Rock Musician?