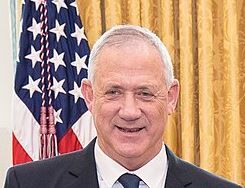 Alternate Prime Minister and Defense Minister Benny Gantz and U.S. Secretary of Defense Mark Esper signed a joint agreement on maintaining Israel’s qualitative military edge in the region at the Pentagon on Thursday.

Gantz hailed the agreement as a confirmation of the U.S. commitment to Israel’s security.

“Today in D.C., months of dedicated work culminated in Defense Secretary @EsperDoD and I signing a joint declaration confirming the United States’ strategic commitment to Israel’s qualitative military edge in the Middle East for years to come,” Gantz tweeted.

“The declaration naturally elaborates on the practical measures involved, which I will not elaborate on here, but I will say this: Israel’s security has taken a major leap forward today, thanks to our American Allies,” he wrote.

The agreement comes on the heels of Israeli concerns regarding rumored U.S. sales of F-35 fighter jets to the UAE.

According to a September Reuters report, the U.S. was preparing to sell the aircraft to the UAE as early as December 2020, although working on a solution to maintain Israel’s military superiority in the region.

Prime Minister Benjamin Netanyahu has come under fire for allegedly failing to disclose a secret clause in the UAE – Israel peace deal that would allow Washington to sell advanced military equipment to the UAE.

Netanyahu called the claims fake news, but UAE officials said Netanyahu had given explicit permission for such sales to take place.

At the signing ceremony, Esper reiterated that Israel’s security is a major priority for the US.

“It was important for me once again to reaffirm the special relationship between our two countries, the commitment we have made to Israel’s security based on our shared values, our shared history, and I want to thank you for your personal efforts in the past few weeks,” Esper said.

Gantz emphasized the importance of military cooperation between the U.S. and Israel, especially as the Jewish state’s normalization agreements shift alliances across the Middle East.

“Now that we are entering an era of positive normalization processes in the Middle East, which actually can face an aggressive Iran across the region, this ability of continued cooperation is so very important,” he said.

On Twitter, Esper posted pictures of his meeting with Gantz and wrote a summary of the day’s events.

“It was a great pleasure, my friend!” Gantz responded.