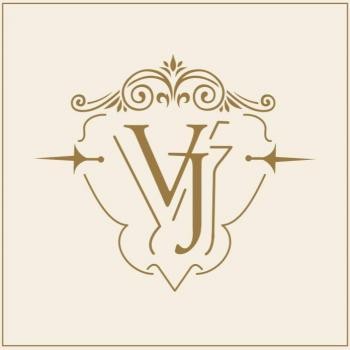 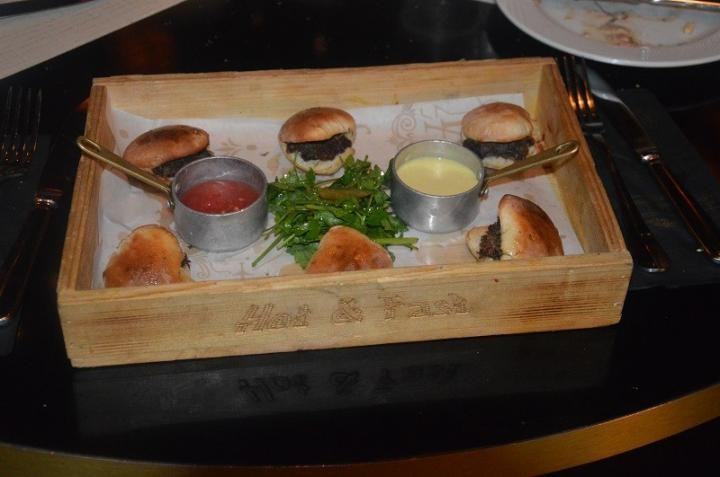 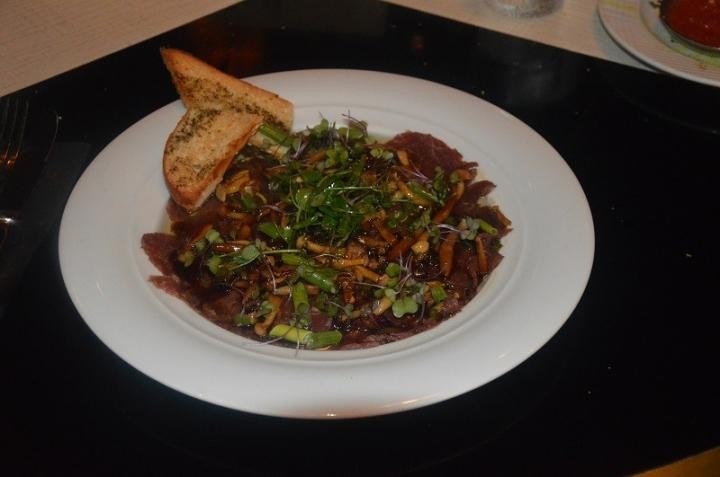 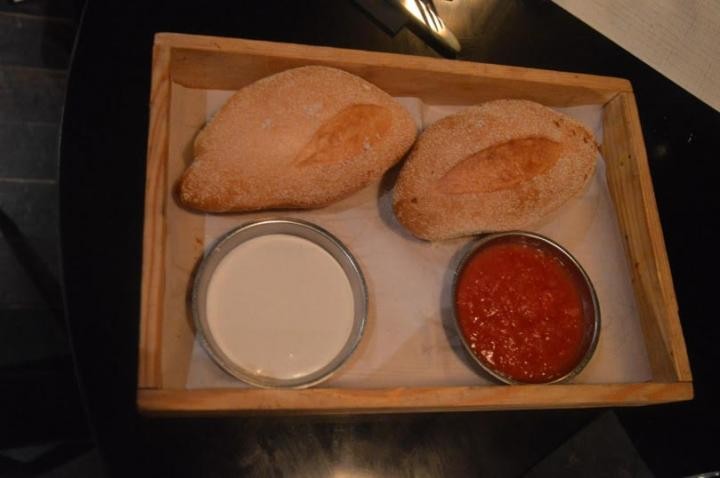 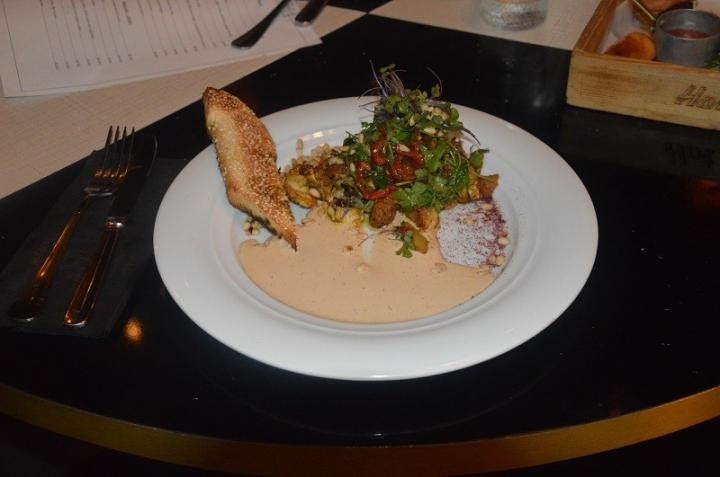 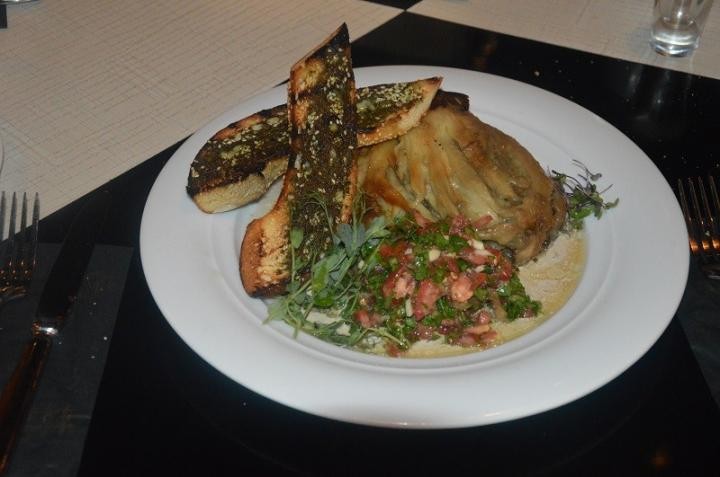 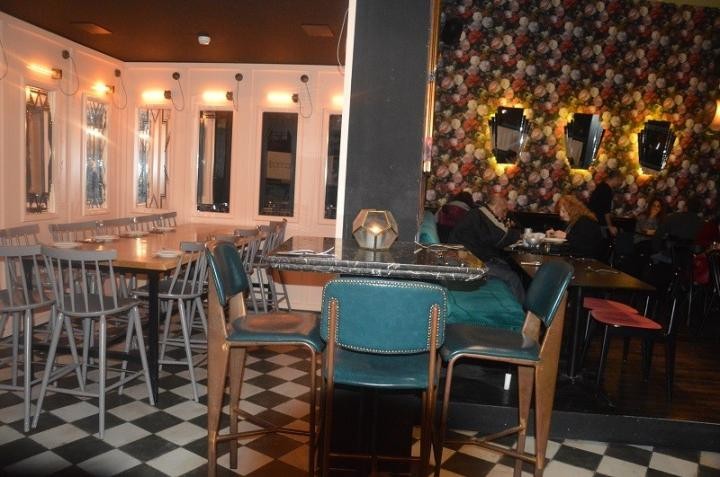 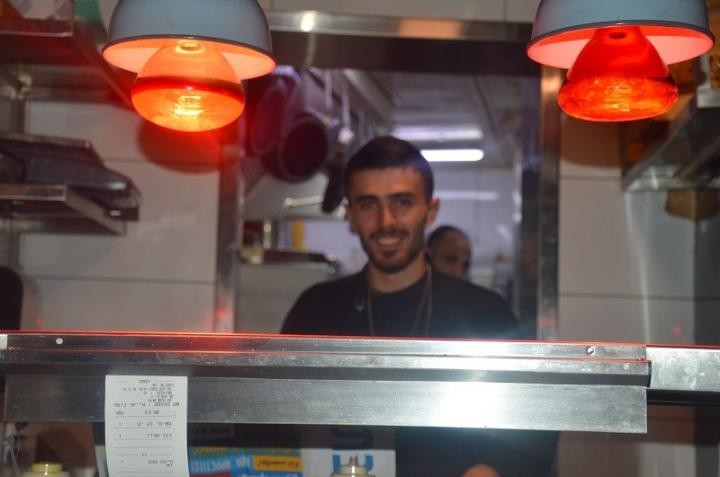 Yaron and Eti Jospe have owned several franchises of Pizza Hut in Jerusalem and elsewhere in Israel, but one day they decided, “we wanted to take a restaurant to a higher level, to fine dining. We wanted to be more creative and since we like to host, we wanted to host you in our living room,” explains Yaron.

When you walk through the doors of Valero, you notice every window is an arch, and the tiered crystal chandelier is over your head. The U-shaped restaurant is retro but modern design.

In the room to your right, you are drawn to the enormous photograph of an Egyptian belly dancer with a black and white tile floor. Then you realize you are walking on a replica of that floor. Besides the framed photograph, there is rose-patterned wallpaper and mirrors on one wall.

Some of the windows, which overlook Agrippas, are covered with off-white curtains; others have black curtains.

Returning to the entryway, as you walk through, to your right is a private room to seat 10, with mirrors on the wall.

On your left in the back is a bar with an extensive array of liquors;  bar stools seat 12 in front of a black marble counter.

A window to the kitchen is opposite the bar where 20-year-old chef-in-training Yovel Vaknin is working. Born to Moroccan parents, he recalls he liked the kitchen when he was a child and started studying food at the age of 13. Although he is still in the army, he comes here each day after their training.

“The kitchen is the number one focus of my life,” he says. Working with the owners on menus and dishes, he says they mix Israeli food with French and Moroccan.

What about the restaurant name? It’s genuine Jerusalem history!  Haim Valero was a 19-20th century banker which he inherited from his father, a Turkish Jew, whose family originated in Spain. The bank’s capital and financial services were used to acquire land for Machaneh Yehudah which was initially called Valero Market.

In an attractive folder, the menu contains a large wine selection of 35 wines, available by the bottle or glass, printed on the left side; on the right side is the page with appetizers and entrees which can be pulled out and changed.

Before embarking on some tasting, Yaron brought us the “house” drink, a chaser based on French anise with apple juice, lemon juice, mint, cinnamon and more, served to all patrons.

As we got ready to sample some of the dishes on the menu, Yaron says, this elegant restaurant has Mediterranean food with the flavors of the market taken to a new level.

In the Appetizer section, there are 10 listed.

For example, we first tried the “House” Bread, developed with a Machaneh Yehudah bakery, Duvdevan Shaneet, coincidentally where we buy our pita, rolls, some breads and some challot.

The house bread is served with dips of tahini and tomato sauce (NIS22).

Then we were given the Baladi* Eggplant on black tchina with tomato salad, enhanced by chili peppers and hot peppers (NIS42).  Loving spicy foods, my companion enjoyed the salad and said it had a little bite but was not too spicy. This exceptionally large portion was accompanied by toasted Jerusalem bagel with zaatar and oil. (*Although baladi means “the iman fainted,” it is usually referred to as charred eggplant.)

Next was Mini Pita Chef—6 appetizing, baby-size pita sandwiches stuffed with asado inside (the meat that is cooked no less than 6 hours and often many more hours); side dips of tomato sauce, tchina with amba and parsley leaves were served in tiny metal, handled pots (NIS56).

In a unique presentation, Fish Shwarma arrived made with buri (grey mullet) fish, built up like a tree, with roasted red peppers, parsley, pickles, and pine nuts; this was accompanied by tchina with harisa sauce and toasted sesame seed Jerusalem bagel slices (NIS68).

Another tempting appetizer was Veal Carpaccio- a tasteful mixture of himaji mushrooms, celery, green onion and chopped-up goose liver (NIS 82), garnished with parsley, with the Jerusalem bagel on the side. This was so filling and delectable, it could be eaten as a main course. For those who are not lovers of mushrooms, like myself, there was no mushroom taste. This is one of the dishes which has nothing to do with the market or market tastes, Yaron related to us.

The Entrée side of the menu lists 8 choices—from Mixed Jerusalem grill (NIS60) to Veal filet and truffles (NIS152).

Although we felt quite full, Yaron insisted we try the Rib steak and Roasted Potatoes (NS148) and what a treat! Coming from “steak country,” we are always cautious when ordering steak. This steak was medium rare, as we like it, on pureed mashed potatoes, accompanied by special, exceptional, crispy roasted potatoes in their skins. (I won’t disclose the secret to making them this way!) Yaron said, the meat in Valero is imported from Argentina and aged here.

The dessert menu is recited by the wait staff (NIS48-54), usually 4 to 5 different ones, but we were too full to try them.

If you are planning a celebration of a birthday or anniversary or other occasions, Valero is definitely a good choice.

For events, they recently completed renovations and have enlarged the seating capacity from 60 to 100.

The author and photographer were the guests of the restaurant.