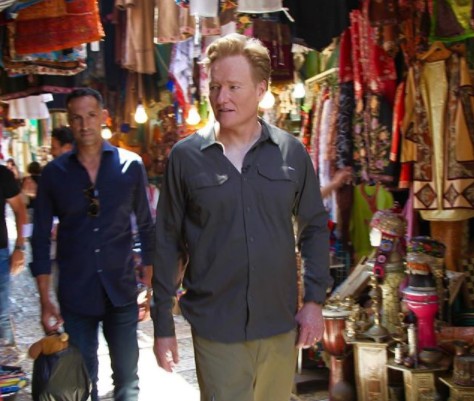 The show Israel has been waiting weeks for is here, and its as funny as we hoped. Check out the different segments.

Conan Throws Himself A Bar Mitzvah
Rabbi Dov Halbertal breaks it to Conan that he can’t convert to Judaism in 90 minutes — but that won't stop Conan from throwing himself a bar mitzvah.

Conan Invites Himself To Gal Gadot's Apartment
Conan reveals his real reason for visiting Israel — to creep out Gal Gadot.

Conan Meets Activists & Refugees In The West Bank
Conan talks with Palestinian activists and young people who have lived their whole lives in refugee camps.

Conan Visits An Israeli Hospital On The Syrian Border
While at the Syrian border, Conan visits Ziv Medical Center, a hospital where Israeli doctors are treating wounded Syrians.

Conan Floats In The Dead Sea
Conan learns that he looks better covered in mud than shirtless.

Conan's Message To The People Of Israel & Palestine
Conan thanks the people of Israel and Palestine for their hospitality and many, many cups of coffee.

Conan Trains With The Women Of The Israel Defense Forces
Conan undergoes rigorous training with the IDF’s Karkl Battalion and is almost immediately deemed unfit for duty.