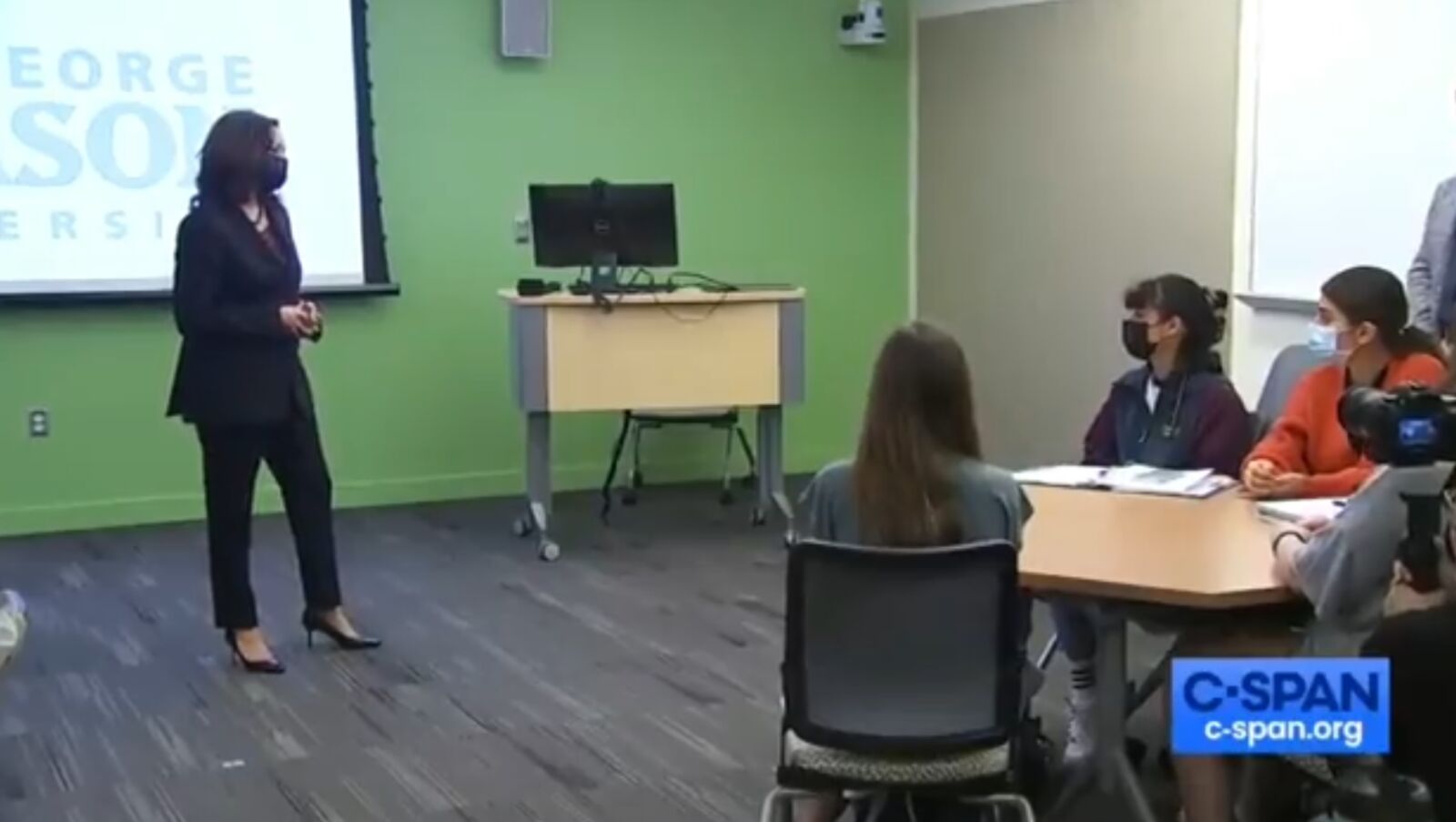 FLAME via JNS
By James Sinkinson

It is time for good people to act in the face of increasing anti-Semitism and anti-Israel libels.

Imagine: The vice president of the United States visits a college campus and fields questions from students. One student stands up and defiantly says, “I don’t understand why our country is favoring Black people in so many of its policies, when we know how terribly Black people abuse the welfare system.” The vice president smiles warmly and supportively replies, “I hear you. Your experience is real. No one should stop you from telling your truth.”

Imagine further: Within days of the incident, the vice president is censured unanimously by the U.S. Congress for her racism and figuratively torn limb by limb for months by every news outlet in the country.

Back to reality: What happens when Jews are maligned by a student telling outright lies, and the vice president encourages her to spread them?

That’s exactly what occurred when Vice President Kamala Harris was visiting a political science class at George Mason University to honor national voter registration day. Harris took questions from three students, including one who slandered the State of Israel in a lengthy diatribe. The student, who described herself as a Yemeni-Iranian, said what Israel is doing is “an ethnic genocide and a displacement of people—the same that happened in America.”

More reality: Israel, the world’s only Jewish state, does not and has not committed any form of genocide—ever. Two million Arab citizens of Israel are free, thriving and multiplying. The population of four million Palestinian Arabs outside Israel, while ruled by oppressive dictators, also continues to multiply uninhibited.

What’s more, Israel has never intentionally targeted or killed innocent Palestinians. It defends itself only against attackers. This fact is not “our” truth—it is the truth.

Here’s another truth: Attempts to delegitimize the Jewish state by demonizing it is anti-Semitism—a form of racism.

Yet rather than condemning the student’s libel and providing a robust defense of one of America’s greatest allies, Kamala Harris demurred. The vice president seemingly congratulated and validated the student’s outrageous remarks, stating, “your voice, your perspective, your experience, your truth should not be suppressed and it must be heard, right?”

It’s clear that Harris is not an anti-Semite or anti-Israel. Indeed, she has a strong record of siding with Israel, at least up until the recent election, when she moved sharply to the left.

Last week, in a meeting with Israel’s Foreign Minister Yair Lapid, Harris said the U.S.-Israel relationship is “unwavering, a relationship that is based on shared values, shared history, and a shared concern for the mutual safety and security of the people of our two countries.”

But it’s easy to mouth flowery rhetoric about the importance of respectful relations in a friendly meeting with your ally. It’s far more difficult—and takes more guts—to repeat that in a room full of your political supporters who are moving into more and more dangerously into anti-Semitic territory.

As commentator Gil Troy aptly noted in the Wall Street Journal about Harris’s comments: “Her reaction is a weather vane, indicating where the Democrats’ conversation might be heading … This is subtler anti-Semitism, teaching us to tolerate the intolerable.”

This is called the “paradox of tolerance”—meaning that if there is a tolerance of all views, this will eventually be exploited by the intolerant.

The more frequently we allow comments like those of the student at George Mason University to stand—let alone give them credence as a legitimate “voice” or “perspective”—the more acceptable Jew-hatred will become.

As noted, it’s unthinkable that Harris would legitimize hateful comments about any other nation or group. Unfortunately, as in many arenas these days, there is one rule for the Jews or the Jewish state and one for all other peoples, races, religions and communities.

Even those who criticize Israel’s control over Judea and Samaria saw the hypocrisy inherent in Harris’s reaction to the student.

“A voice that is based on lies is not a legitimate voice. It is a voice that causes damage,” wrote Uri Misgav, a writer for Israel’s leftist Haaretz newspaper.

The crux of the matter: Dangerous anti-Semitic trends on the American and global left must be opposed, halted and reversed. People leading these trends—like “the Squad” in the U.S. House of Representatives and the Corbynites in the United Kingdom—will only seek to further radicalize people against Israel and Jews.

The pushback must come from those in the center of American politics and on the moderate left, who must become engaged and stand up to the haters and bullies, even if it costs them politically.

We must promote a zero-tolerance policy for anti-Zionism and anti-Semitism. Every single comment that fits in to these categories—like accusing Israel of genocide or apartheid—should be condemned, argued against and defeated with truth.

Hateful movements—like the Nazi movement—did not emerge from nowhere. They first tested the waters with increasingly more radical comments and actions, especially about Jews. When the general public did not object—even though some may have found their views and actions objectionable—they upped the ante. Their hate grew to the maelstrom of the Holocaust, aided by complicity—active and passive—of millions.

We don’t compare the current climate of anti-Semitism acceptance in the United States to the Holocaust. But showing an extreme outcome can demonstrate a principle. It is time good people ceased to do nothing in the face of increasing anti-Semitism and anti-Israel libels. If we don’t stop it now, evil will win.

James Sinkinson is president of Facts and Logic About the Middle East (FLAME), which publishes educational messages to correct lies and misperceptions about Israel and its relationship to the United States.