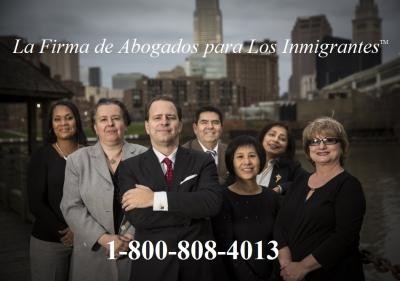 Thank you for visiting the Herman Legal Group ---The Law Firm for Immigrants™!Founded in 1995 by Richard Herman, we are an award-winning, skilled, driven, compassionate and highly experienced U.S. immigration law firm:   passionate about providing exceptional immigration legal services and helping others.  We have received numerous national awards and recognition for our leading role in representing families, individuals and companies in Ohio, Michigan, Pennsylvania, New York, North Carolina, Florida, Texas, and Canada.

To talk to Immigration Attorney Richard Herman about your case, call for FREE phone consult at 1-800-808-4013.  Richard Herman is a nationally-known U.S.immigration law attorneylawyer with 25+ years of experience, AV-rated, recognized in U.S. World News & Report's "Best Lawyers in America," co-authored acclaimed book, "Immigrant, Inc."  Richard and his team blend experience with personal attention to help you navigate complex immigration law.  We work hard and we work for YOU!

The Herman Legal Group was awarded the designation of “Best Law Firm” by U.S. News & World Report in the field of immigration law. Criteria on which clients and peers were asked to evaluate firms included such areas as expertise, responsiveness, understanding of a business and its needs, cost-effectiveness, integrity and civility.  Get to know our Visa Lawyer and Citizenship Lawyera bit better by viewing our videos and reading our immigration news articles!

As evidence of his status as a Top U.S. Immigration Attorney, Richard has been named to Best Lawyers in America (2015-2018),  the oldest and most respected peer-review publication in the legal profession. Partnered with U.S. News & World Report, the Best Lawyer lists are published in the Wall Street Journal, Washington Post, New York Times and Chicago Tribune.

Richard is the co-author of the internationally-acclaimed book, Immigrant, Inc. --Why Immigrant Entrepreneurs Are Driving the New Economy (John Wiley & Sons, 2009), https://www.lawfirm4immigrants.com/book-on-immigrants/
a powerful interweaving of success stories and research which makes the case that Immigrants Make America Stronger!

For over 10 years in a row, Richard has been acknowledged as a “Super Lawyer” and “Leading Lawyer” by various business publications.    Richard received the “Client’s Choice Award” and top rating of “10”  by the law website AVVO.   In the field of lawyer immigration, Richard wants his clients to have the best strategies to navigate U.S.immigration marriage laws.

MARKHAM-TORONTOU.S. IMMIGRATION LAW FIRMS NEAR ME

The Herman Legal Group is proud to serve its clientele from offices throughout the U.S. and Canada. If you are wondering, ‘Is there a U.S.immigration law office near me,” then there is a good chance we are not far away!

Whether you are looking for an U.S.immigration lawyersMarkham-Torontoor TorontoU.S. Law firm immigration, we’ve got you covered.