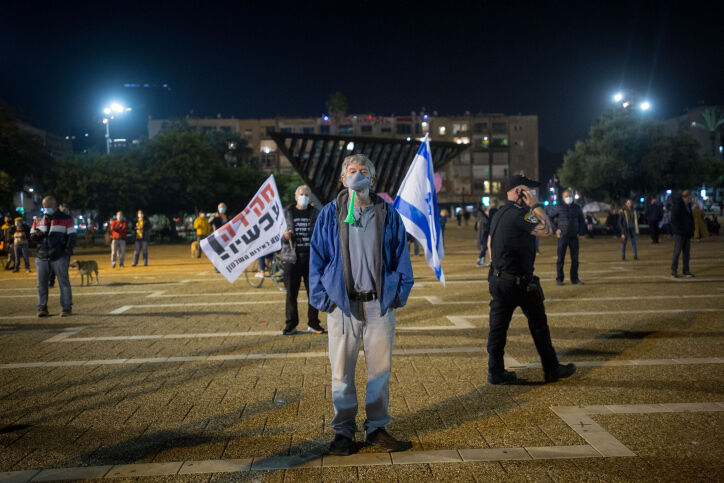 Those who seek regime change should stop sowing the seeds of hate and put forth a genuine visionary challenge to the right instead.

Election campaigns have yet to be launched in Israel, and yet the country’s left is already losing its mind. According to the polls, the hegemonic and ancient Labor Party won’t garner enough votes to pass the electoral threshold. Meretz, which has come to realize its messaging isn’t speaking to most Jewish citizens, is now appealing to the Arab sector.

Blue and White, with its three former IDF chiefs of staff, was the left’s dream team for regime change. But the party has fallen apart and is poised to garner as many Knesset seats as Avigdor Liberman’s Yisrael Beiteinu. The melancholy media has been making every effort to find an attractive left-wing candidate capable of taking on Prime Minister Benjamin Netanyahu and the eight. Yesh Atid chief Yair Lapid, for his part, has promised creative collaborations, and appears to be looking to join forces with right-wing Yamina.

Blue and White chief Benny Gantz, in a move that points to absolute desperation, is establishing a commission of inquiry on a major graft scandal known as the submarine affair. He plans to put a retired judge at its head, who, just a few years ago, suggested Netanyahu “leave the keys on the table.”

The stars simply refuse to align for the left. Under these circumstances, all that remains is to create evil, Bolshevik-style propaganda that receives widespread coverage from the media outlets that for years have tried and failed to understand why they have been unable to convince the public to oust the right-wing government.

The left’s most vocal spokesman is former Prime Minister Ehud Barak. How much hatred and jealousy must an Israeli Jew have in their heart to claim that Netanyahu is marching down the same path as the fascist movements that came before him. According to Barak, Netanyahu is reminiscent of Nazi leader Adolf Hitler. How low can you go? It’s not very surprising, though, seeing as Barak’s spiritual mentors accused Zionist leader Ze’ev Jabotinsky and the right of fascism years before the founding of the state. The greatest inciters have always been members of the socialist left, and they have always shed crocodile tears over the supposed incitement they purport to face.

It’s no wonder then that a former deputy IDF chief of staff is reminded of processes that took place in Europe in the 1930s, and foolish followers calls for Netanyahu to be murdered so that he will be made “to cry out louder than the Jews during the Holocaust.”

But the left’s efforts don’t harm Netanyahu and the right. The more they shout their empty slogans, the more they bolster the right.

The left is meeting its end because it lacks vision. The “peace of the brave” has collapsed. You would be hard-pressed to find Israelis willing to return to the days of “Socialism Now.” No one misses the labor union economy that choked every private initiative and perpetuated a Second Israel—Israel’s disadvantaged class of non-Ashkenazim from the periphery. The “Anyone but Bibi” slogan and now comparisons to the oppressors of Jews do not make for a very convincing case.

The State of Israel has accomplished marvelous things. The world, including peace-seeking Arab states, is amazed at its achievements. Most Israelis are satisfied with their lives, and won’t leave the country for Berlin any time soon. Israeli society is not polarized beyond the vociferous fringe. Israelis are connected to their homeland, as they are to their spiritual and religious heritage. That’s why my suggestion to those who seek regime change is to stop sowing the seeds of hate and put forth a genuine visionary challenge to the right instead.

Dr. Haim Shine is a faculty member of Israel’s Academic Center of Law and Science, and a member of the Jewish Agency’s Board of Governors.