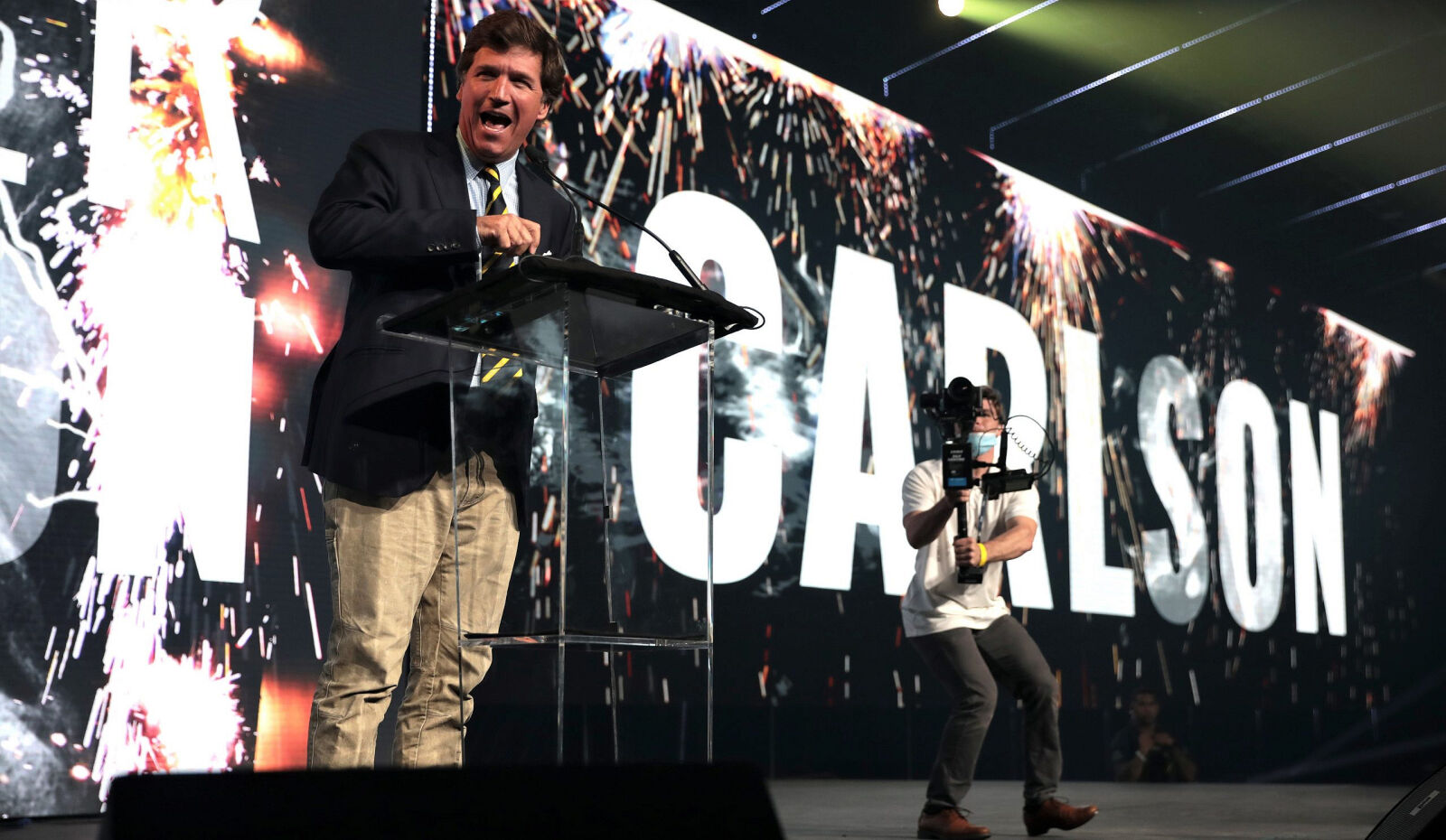 Tehran apologists on both the right and left share a desire to stop the United States from stopping Iran. Does antipathy for Israel and its supporters explain this unusual coalition?

As the administration of President Joe Biden tries to find a way to revive Barack Obama’s dangerous 2015 nuclear deal with Iran, we are heading towards a debate about the virtues of a policy that seems predicated on a renewed desire to appease rather than to confront Iran, as was the case with the administration of Donald Trump.

But while Biden’s cheering section in the mainstream media seems prepared to applaud a policy avoiding holding Iran accountable—as it did when it played the role of Obama’s “echo chamber” from 2013 to 2015—there is another argument being made at the margins of the discussion that goes beyond the false choice between appeasement and war that both Democratic administrations asserted. Instead, voices on the left and the right are claiming that any concerns about Iran’s nuclear ambitions or its quest for regional hegemony are misplaced.

Oddly enough, the two loudest ones making such arguments are Peter Beinart and Tucker Carlson.

The two couldn’t be more different.

Beinart is the far-left anti-Zionist columnist for The New York Times and the radical Jewish Currents publication. Carlson is the host of the highest-rated show in the history of cable news, which has made him the tribune of populist conservatism. Beinart hates everything about Trump and the Republicans. Carlson has been one of the former president’s biggest cheerleaders and is now one of the loudest critics of Biden.

Beinart, a former editor of The New Republic and the author of a number of books about foreign policy and Israel that went quickly to the remainder pile, hasn’t the kind of influence that Carlson—whose “Tucker Carlson Tonight” can count on an estimated 4 million viewers tuning in during prime time five times a week on Fox News—can command.

Nevertheless, Beinart’s latest Jewish Currents column, in which he made the argument that not only was it important to revive the Iran nuclear deal but that any effort to sanction or to oppose Tehran was intrinsically wrong, resonated far beyond the readership of that marginal journal.

Beinart used to pose as the leading voice of “liberal Zionism,” but he’s become the anti-Semitic left’s favorite Jew ever since he used his perch at the Times last summer to call for the elimination of the Jewish state. In his latest missive, he’s staked out a position that seeks to mobilize the left-wing base of the Democrats to oppose any effort to force Biden to get tough with Iran.

He claims that the Israelis are the real terrorists in the Middle East and that it is the United States, especially under Trump, that made the region more violent and unstable. Indeed, though he concedes that the ayatollahs are “brutal” and “self-interested,” he asserts that they are no worse than either authoritarian Saudi Arabia or democratic Israel. But that faint criticism is offset by his claim that “what distinguishes it [Iran] from its adversaries is not its malevolence, but its independence from the United States.”

Beinart’s journey from neo-liberal hawk (in 2004, he wrote a book supporting the wars in Afghanistan and Iraq titled The Good Fight: Why Liberals—and Only Liberals—Can Win the War on Terror and Make America Great Again) and liberal Zionist to anti-Zionist and champion of Iran is a fascinating study in radicalization and the lengths to which some will go to justify their rejection of the Jewish state.

Carlson, who began his national press career at the neo-conservative Weekly Standard, has gone on his own journey from libertarianism to populist scourge of Wall Street and a fervent isolationist. His ratings skyrocketed last summer largely because, more than any other conservative voice, he was willing to boldly speak out against the Black Lives Matter movement and critical race theory. But while he is known as one of Trump’s biggest boosters and an advocate for his attempt to make the GOP the party of working-class voters rather than Wall Street, he had deeply mixed feelings about Trump’s foreign policy.

Trump was labeled by many as an isolationist because of his campaign rhetoric and use of the “America First” slogan. But in practice, Trump’s version of “America First” was not isolationist. Trump regarded the defeat of ISIS as a priority and succeeded where Obama had failed in defeating the “caliphate” that had taken over much of the territory of Iraq and Syria. He also rightly regarded Iran as a deadly threat to the West and saw clearly that Obama’s nuclear deal had made it even more dangerous. He withdrew the United States from the deal and put into place a “maximum pressure” campaign aimed at renegotiating the pact and replacing it with one that would eliminate the embedded sunset clauses, which would give Iran the right to a legal bomb, as well as forcing Tehran to abandon its support for terrorism.

While Trump was careful not to get suckered into a war, that vigorous approach to Iran, including the killing of its top terrorist—the Islamic Revolutionary Guard Corps’ Gen. Qassem Soleimani—met with Carlson’s disapproval. To his dismay, Trump’s policies on Iran were not much different from the positions of the dreaded neo-conservatives that Carlson despises. Trump launched strikes against pro-Iranian terrorist militias and the IRGC in 2017, 2018 and 2019 in order to warn Tehran that it would pay a price for attacking Americans. Biden has now done the same thing by ordering strikes of his own last week in retaliation for the death of an American contractor in Iraq as a result of terrorist action backed by the Islamic regime.

Carlson’s reaction to Biden’s attack on the terrorists who killed an American last week was brutal, accusing the administration of “killing strangers” in a “far-away land” and bringing “war back to the Middle East after four years.” He mocked the idea that ISIS was a threat to the West and sees no need for “counter-terrorism” measures. He also defended the brutal Assad regime in Syria. Like Beinart, despite its genocidal threats towards Israel and his aggression towards Arab states in the region, Carlson dismisses the whole idea that the United States needs to do anything about Iran.

Curiously, Carlson is an outlier when it comes to the issue on which nearly all Republicans move in lockstep: Israel.

In contrast with other Fox shows and other conservative venues, Israel is almost never mentioned on his show. But though liberals and Democrats are the main targets of his scorn, he reserves his greatest disdain for “neoconservatives” and others whom he believes have duped America into fighting “forever wars” in the Mideast instead of taking care of the needs of those at home. He seems particularly angry at Republicans who have become beloved by the pro-Israel community like former U.S. Ambassador the United Nations Nikki Haley.

Carlson is right that the wars in Iraq and Afghanistan have been costly failures. But, like Beinart, he goes further and now claims that Syria and its ally Iran aren’t worth bothering about.

These Iran apologists may start out from different points and have different end goals. But both have little use for the alliance with Israel and bend over backwards to dismiss concerns that Iran, and its Islamist and authoritarian allies, are threats to America’s interests and values.

For the moment, they remain a minority, yet as Biden fumbles his way towards another round of appeasing Iran, that only makes it even more inevitable that sooner or later, the United States will have to clean up the problem that Obama created with his nuclear deal. At that point, the need for a tough-minded approach to Tehran will be necessary and controversial. Whatever you may think of Beinart’s and Carlson’s stands on other issues, it’s troubling that increasingly influential voices on both the left and right—whose only commonality is disdain for the U.S.-Israel alliance—are trying to persuade Americans not to care about the problem.