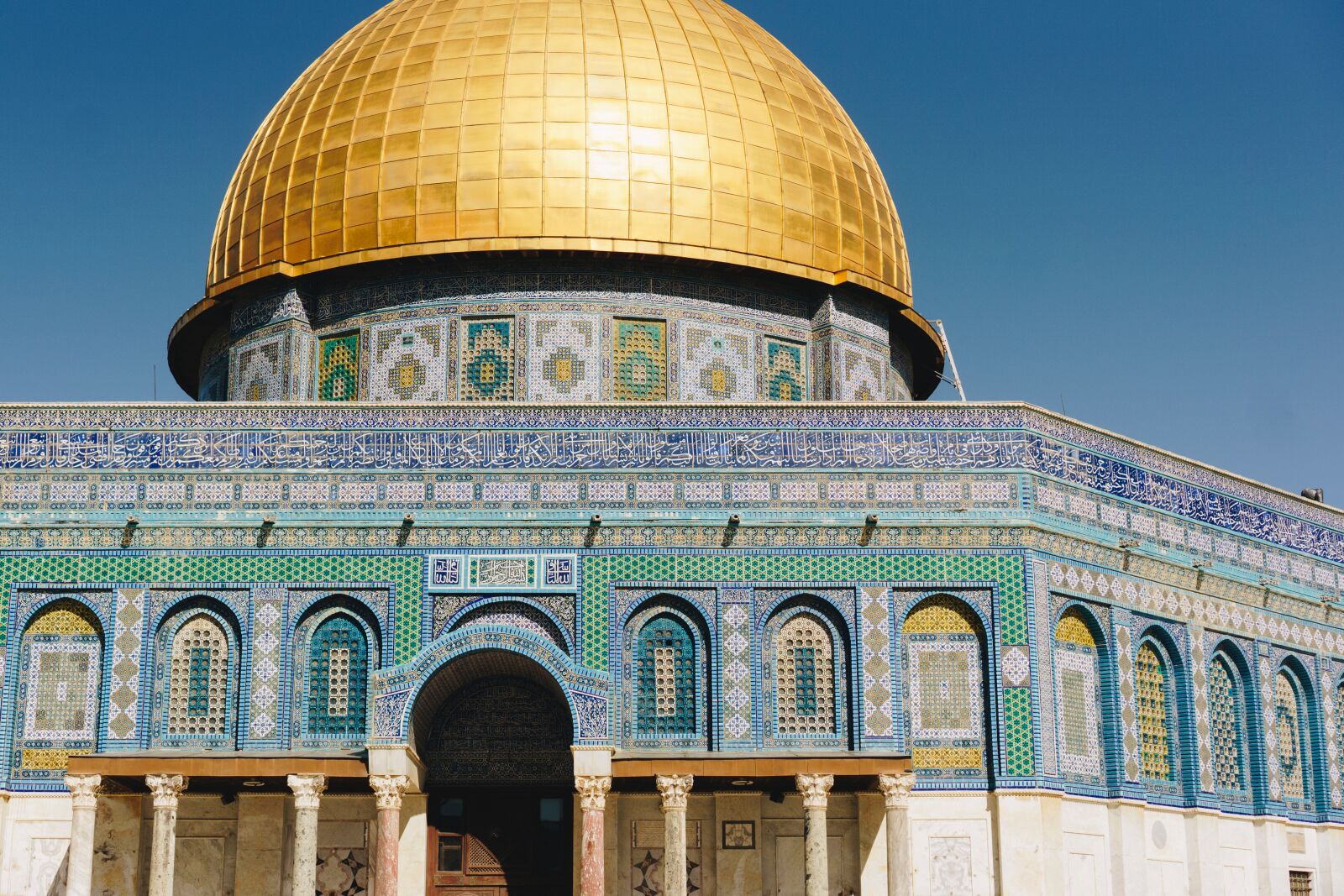 For the first time, a lobbying group met in the Knesset to discuss the subject of the Temple Mount. The meeting came at a pivotal time, when the future of the site expressed by Solomon and predicted by prophecy as a House of Prayer for all Nations stands in the balance, closer than ever to being established.

On Tuesday, a lobby for strengthening the status of the Temple Mount, led by MK Ariel Kellner and MK May Golan of the Likud, was launched in the Knesset. The incident involving the UAE delegation was raised at the beginning of the meeting by Dor Harlap, head of Hazon Leumi (national vision), an NGO focused on educating college students and youngsters.

Likud Knesset Member May Golan speaks for the first time at the Plenary Hall at the Knesset, Israel’s Parliament, in Jerusalem, on May 14, 2019. Photo by Hadas Parush/Flash90

“We are in historical days,” Harlap said. “Between the plague of the corona that affects the whole world and the Abraham Accords that establish peace between us, the State of Israel and the Arab states.”

“This week we watched as a delegation of tourists from the Gulf who sought to ascend and pray on the Temple Mount but were met with violence and insults by the Waqf(Muslim authority) who feel like the masters of the Temple Mount. This reality is pushing us to exercise our sovereignty over the Temple Mount even by force.”

“Unfortunately the State of Israel tried to ignore the Temple Mount as the holiest place for us with sayings like ‘What do I need this Vatican’ by Moshe Dayan. Unfortunately, weaknesses in the exercise of sovereignty by the government and police lead us to a dynamic where we do not actually own the mountain. I call on all of us to continue to lead Restoring sovereignty to the State of Israel and leading moves to strengthen Jewish identity on the mountain. “

“The visits by foreign dignitaries to the Temple Mount is intended to open up the subject of the importance of the site as having civil importance to Israel,” Gabi Osherenko, a political adviser to Kallner said. “This will express a political statement to the visiting dignitaries. The Temple Mount has national and historical significance to Israel in addition to the obvious religious significance.”

“There are currently no concrete plans of action however the lobby was necessary to raise up the issue of the Temple Mount above the theoretical level.

“On a religious level, opening up discussion about the Temple Mount is important to all religions. Currently, the situation is run by the Muslim Authority and we have seen that they do not allow religious equality to be expressed. They even prevent religious freedom of their fellow Muslims.”

Former MK and Temple Mount Activist Rabbi Yehudah Glick said: “We see that we have achieved big and positive changes, including the outlawing of the Morabiton and the Morabitat by Gilad Ardan. But there is still a long way to go.”

The Morabiton and Morabitot are Muslims paid by the Waqf to harass non-Muslims who visit the Temple Mount. Their activities were ruled illegal by the Israeli High Court.

“It is unacceptable that a delegation from the United Arab Emirates is insulted on the Temple Mount,” Rabbi Glick said to the gathering. “This situation must pass from the world. We must demand that the relevant parties continue to act on the issue. “

Dichter was, in fact, relating to a deceitful policy initiated by the Palestinians and perpetuated by the mainstream media which refers to the entire Temple Mount as Al-Aqsa which, until recently, referred to the silver-domed mosque at the southern end of the Temple Mount Compound. Dr. Mordechai Kedar, a senior lecturer in the Department of Arabic at Bar-Ilan University, explained that using the term ‘Al Aqsa’ to refer to the entire Temple Mount is a recent phenomenon.

“All throughout the Ottoman Empire and the Jordanian occupation of Jerusalem, Al Aqsa always and only referred to the grey domed mosque,” Dr. Kedar explained. “Cartography reflects politics. This is recorded on every map of the location ever made which identifies Al Aqsa as the mosque. The Temple Mount is labeled Mount Moriah because, before 1967, Jordan had no problem identifying the site with its Biblical origins.”

“This changed in 1967 when Rabbi Goren announced his intention to build a small synagogue in the northeast corner of the Temple Mount. The Waqf immediately objected, claiming that this was part of Al Aqsa. This was to incite the entire Arab world against the Jews praying on the Temple Mount.”

“Jerusalem and the Temple Mount are at the epicenter of the Palestinian story,” Dr. Kedar said. “Without Jerusalem and Al Aqsa, the Palestinian issue has almost no meaning. It is like whiskers without a cat. This is why they keep repeating the allegation that the Jews have no connection to the Temple Mount or Jerusalem even though this flies in the face of all recorded history.”

Al-Dahra Agriculture, a state-linked company that is a major exporter of animal feed and other essential food commodities, arrived in Israel at the invitation of Netafim, a major Israeli irrigation technology firm. Netafim is expected to open a branch office in the UAE in cooperation with Al-Dahra.

As part of their semi-official visit, on Thursday night the delegation consisting of nine men and one woman visited the Aqsa Mosque on the Temple Mount. While in the mosque, several Palestinians approached the delegation, insulting them with one Palestinian yelling, “Normalizers, rubbish,” at the visiting dignitaries and another yelling for them to leave the site.

One of the delegates tried to engage the Palestinians in dialogue who responded, “Emiratis are dogs…Get out!”

Palestinian Authority Prime Minister Mohammad Shtayyeh condemned the visit to Israel by the UAE delegates as a “free reward to the Israeli occupation to encourage it to confiscate more Palestinian land and build more settlements.”

Shtayyeh stated that the UAE delegates should have cleared the visit with the Palestinian “owners.”

“One ought to enter the gates of the blessed Al-Aqsa Mosque by way of its owners, rather than through the gates of the occupation,” Shtayyeh said in a statement on Monday. “It is sad to see some Arab delegations entering the compound through the Israeli gate, while worshippers are denied access to it to perform their prayers.”

Entrance to the site by Muslims has been limited as per pandemic restrictions.

The Daily Sabah, a Turkish media, reported the event under the headline “Palestinians force UAE delegation to leave Al-Aqsa Mosque” which the news source came in the wake of “Abu Dhabi’s normalization deal with Tel Aviv, which is regarded by many as a betrayal of the Palestinians.”

This most recent incident comes after the Mufti of Jerusalem, Sheikh Muhammad Hussein, issued a fatwa (religious proclamation) last month declaring that Muslim citizens of the UAE will not be permitted to pray at al-Aqsa Mosque on the Temple Mount in Jerusalem.

Though the PA has an embassy in Abu Dhabi, the Palestinian foreign ministry recalled its ambassador in response to the Abraham Accords.

It should be emphasized that the right of the UAE delegation to pray at Al Aqsa was specifically declared in the US State Department’s statement describing the accords signed last month:

“As set forth in the Vision for Peace, all Muslims who come in peace may visit and pray at the Al Aqsa Mosque, and Jerusalem’s other holy sites should remain open for peaceful worshipers of all faiths.”

This multi-faith vision of the Temple Mount was also expressed in Trump’s Middle East “Peace to Prosperity” plan which stated:

“People of every faith should be permitted to pray on the Temple Mount/Haram al-Sharif, in a manner that is fully respectful to their religion, taking into account the times of each religion’s prayers and holidays, as well as other religious factors.”

Freedom of worship is also ensured by the United Nations’ International standards on freedom of religion or belief which states in article 18 that “Everyone shall have the right to freedom of thought, conscience, and religion. This right shall include freedom […] either individually or in community with others and in public or private, to manifest his religion or belief in worship, observance, practice, and teaching.”

In fact, when King Solomon dedicated the Temple, he specified that it should be a place of worship for foreigners.

Oh, hear in Your heavenly abode and grant all that the foreigner asks You for. Thus all the peoples of the earth will know Your name and revere You, as does Your people Yisrael; and they will recognize that Your name is attached to this House that I have built. I Kings 8:43

This international nature of the site was prophesied to return in the Third Temple.

I will bring them to My sacred mount And let them rejoice in My house of prayer. Their burnt offerings and sacrifices Shall be welcome on My mizbayach; For My House shall be called A house of prayer for all peoples.” Isaiah 56:7