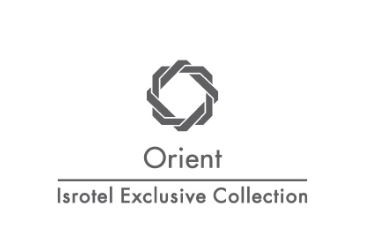 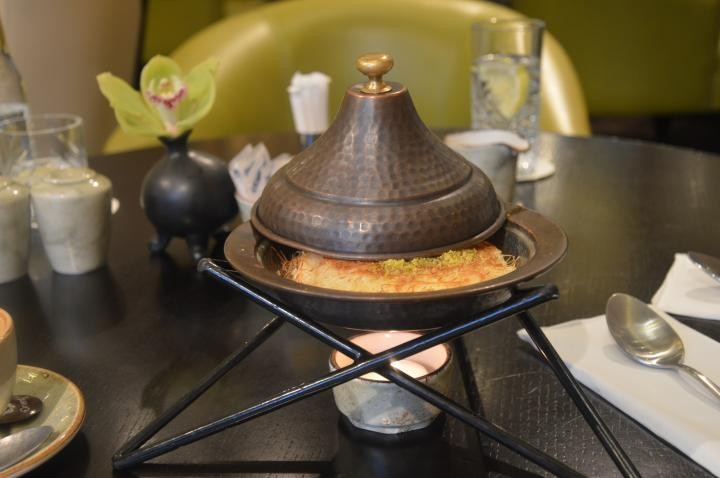 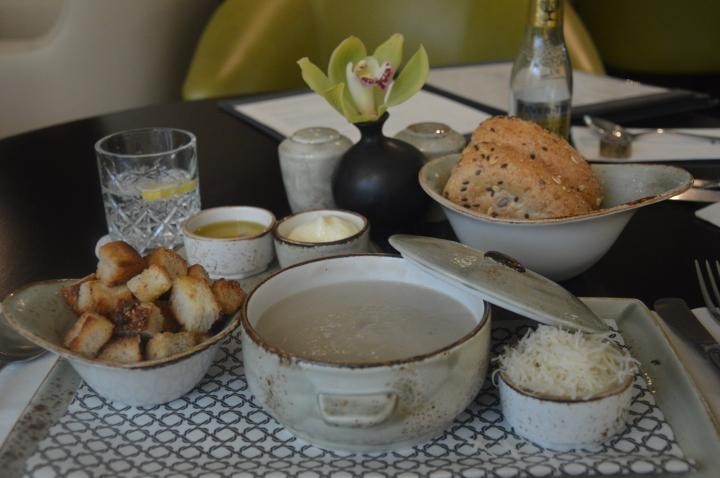 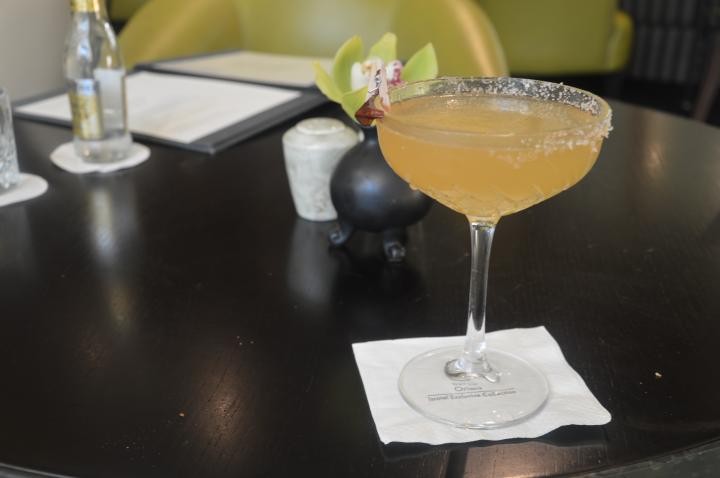 02-569-9090 https://www.isrotel.co.il/orient
Emek Refa\\\'im St 3
by Sybil Kaplan
Photographs by Barry A. Kaplan
The Khan
Address - Orient Jerusalem Hotel
3 Emek  Refaim
Phone -02 569-9090
Hours - 11 a.m. to  11 p.m. Sunday through Saturday
Bar - 11 am. to 11:30 p.m.
Kashrut - Rabbanut Yerushalayim
Special Shabbat menu available
The word Khan is Persian and refers to an inn built in a town for travelers.
When the Orient Hotel opened in July 2017, the Khan lobby restaurant opened. You walk through the main lobby, around the spiral staircase, to the end and turn left into a breathtaking room. Two large, curtain-draped windows overlook the patio. On the opposite wall are  mirrors and there is a mirrored bar at the end.
There are mostly round tables with padded arm chairs in chartreuse and cream, seating a total of 80. Above you are white lace-looking chandeliers. Under your feet are soft carpets. Tables are set with silverware tucked into beige linen napkins; a flower in a vase adorns each table.
The menu in a large folder shows 4 salads (NIS61-71 NIS); 2 soups (NIS45); 5 pastas  (NIS63-68);7 specialties of Jerusalem (NIS35-95); two fish entrees (NIS135 and 140); 5 desserts.
The separate wine list offers 9 cocktails; sparkling wines, champagne; white, rose and red wines; blends; and dessert wines.
Given the hot weather, my companion quenched his thirst with a tonic; I decided to try the milkshake (NIS35) with vanilla chips and ice cream in a tall ice cream soda glass--totally dreamy.
Our hostess was Daniella Seidman, restaurant manager, who received her training at Hadassah College when it offered a program in Service Management and Tourism. She previously worked in restaurants and hotels before coming to the Orient. She made sure every detail of our tastings was perfect. She was assisted by the waitress, Tair, who recently finished her active IDF service.
The first item Daniella chose for us to sample was a real favorite of mine, Jerusalem Artichoke Soup (NIS45). Daniella pointed out it is made without any soup mix, just fresh vegetables and is gluten free. It was accompanied by two whole-grain, baby breads in a basket and sides of butter, croutons, grated Parmesan cheese and balsamic vinegar and oil. The pureed soup was delicious. One other soup, tomato, is available on the menu.
Then she chose from among the 4 salads (NIS61-71) the Machne Yehuda Salad (NIS69), a meal in itself and the most popular one at the Khan. Beside the lettuce and market vegetables, there were pine nuts, almonds and cashews, and Kalamata olives. Large Bulgarian cheese slices were the garnish. The dressing was an olive oil and lemon juice combination. Tchina was on the side. The salad was served with glasses of ice water with lemon slices floating in them.
Out of the 5 pastas (NIS63-68), we were served Potato Gnocchi, a favorite of my companion, with a wild mushroom cream, Panko and a dollop of crème fraiche. This beautiful dish was garnished with Parmesan cheese. Lots of butter and lots of garlic were definitely distinctive. Daniella confessed this was one of her favorites.
Also on the menu are 7 specialties of Jerusalem (NIS35-95) which we were too full to try, but the two she had picked for us were a unique Eggplant Kadaif (NIS66) made with goat cheese and roasted pine nuts.
The second one we did not try was the Mezzes Plate (NIS71), a "fun plate," popular with tourists because it is nice for sharing, all made from scratch in the kitchen. Included is falafel, hummus, dips and pita.
We also were unable to try two fish entrees (NIS135 and 140).
In the beverage category, the menu has 12 cold drinks, 3 beers, and 9 hot drinks.
On the separate wine menu are 9 cocktails; sparkling wines; champagne; white, red and rose wines; blends and dessert wines.
The cocktail names are really intriguing--The Great Gatsby, Batsheba, Milk & Honey, and Besamim, so Daniella persuaded my companion to try the King of Salem (NIS68). The chilled glass with Mongolian salt around the rim contained hot chili (one clipped to the rim with a miniature clothespin), lime juice, agave syrup, Julius Bitters and Don Julis Blanco. My companion said it had a little bite but got better with every sip.
Daniella said we could not leave without tasting one of the 5 desserts which Tair brought out very ceremoniously in an elegant presentation. Knafeh (NIS70) was made with Ricotta cheese, garnished with roasted pistachio nuts and accompanied by a tiny pitcher of rosewater syrup. The knafeh sat in a metal container with a removable lid like a tajine, fitted into a metal frame; a lit candle was placed underneath to keep it warm while savoring this awesome taste.
If you are looking to celebrate  a special occasion in an extraordinary setting, the Khan lobby bar and restaurant at the Orient must be your choice.
The author and photographer were guests of the restaurant
Share: