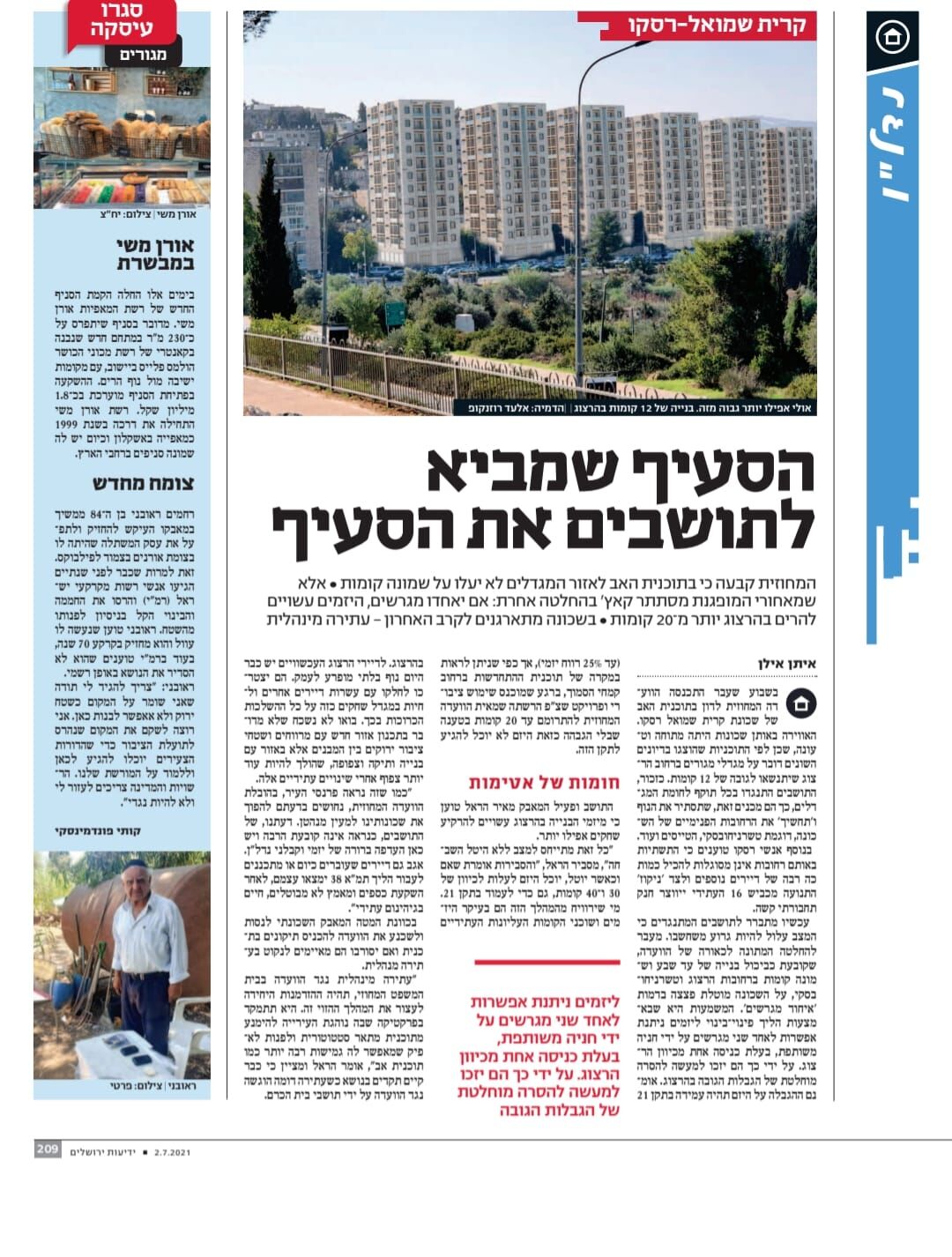 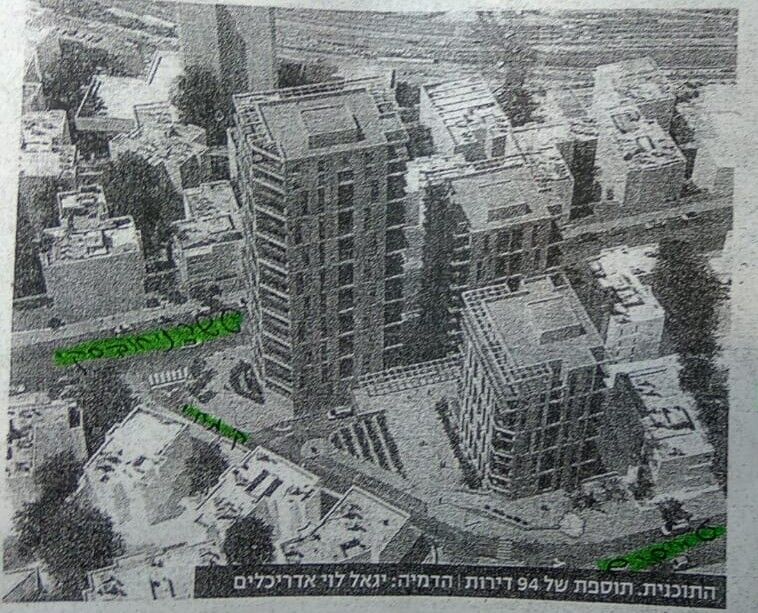 The Jerusalem Municipality is in the process of authorizing a disastrous District Master Plan (Tochnit Haav) that will allow the construction of huge skyscrapers in the interior neighborhoods of the city. The plan is, in several neighborhoods, to destroy the Shikunim next door and replace them with Towers.

A huge effort is being waged to prevent this precedent-setting change to the Master Plan that will allow these towers to be built. If you wish to join us in this effort to save our neighborhoods please send an email to the addresses listed at the bottom of this notice, and please share this important message with your friends and neighbors.

As an example you can write:

Economic urban densification is most certainly necessary, but nothing like this. Major reforms to our planning and building bureaucracy are needed urgently

Never in the history of the state or before its founding, when architects and planners of the stature of Dov Karmi, Richard Kaufmann and Eric Mendelsohn were active here, has Israeli architecture and urban design sunk so low as it has in Jerusalem.

Numerous shockingly bad urban renewal proposals of the kind known as evacuation and reconstruction (pinui-binui) are already approved for construction or underway in Kiryat Menachem, Gilo, Talpiot and many other neighborhoods (historic areas like the Davidka Square area and Nachlaot are up for grabs as well). And judging from these designs, it’s as though the Jerusalem Municipality issued edicts to architects and urban planners that went something like this:

“As far as we’re concerned Jerusalem is no different from any other city in the country. Forget its 3,000 years, historic character, the Torah, the Siddur, in short, forget everything you were ever taught or experienced. We especially don’t like hearing about human scale and professional ethics.

“It’s all very simple. Just multiply by three or more the number of existing apartments in your plan’s area. That’s the number we want. Then stick those residential towers, the only building type we’re interested in wherever you can. Make sure they are all alike, as this will help to speed matters up. Copy-paste. Thirty stories high to begin with. We’ll try for more. Ignore the project’s existing physical and natural environmental context entirely. Towers adjacent to two-story buildings are just fine with us.

“We’re not at all interested in public or private open space. Minimize it as much as possible. Stuff the site as if it were a can of sardines.

“Finally, the very last thing we want is the residents’ opinions on your plans. You will be carefully instructed before any contact with them and the neighborhood council, where we have representatives informing us. We’ll set up Zoom meetings, give them our utmost attention, then disregard all of their comments.

“If you wish to stay in business, do as we say. We’ll make sure to get 80% of the residents to agree, as that’s the law, and get your plan approved in record time. We’ll ram it through our City Planning Department and the District Committee, which rubber stamps our plans.”

“Our project manager will be in touch with you daily. We’d like to see your preliminary plans ready by next week. Arrange that meeting with our secretary before you leave.”

In the projects being approved, there appears to be no limit to density and lack of contextual consideration. Needless to say, the decision-makers issuing these instructions, whether on the political or senior bureaucratic level, are completely ignorant in matters of architecture and urban design, inexperienced and incompetent.

Mayor Moshe Lion, trained in accountancy and law, is mainly interested in getting re-elected, and is therefore backing lightning-fast housing solutions he obviously does not understand. Assistant Mayor and Chairman of the Planning and Building Committee Eliezer Rauchbrenner studied in a yeshiva and worked for years as a journalist. City Engineer Yoel Even is a civil engineer who has worked as a project manager. Not one of Jerusalem’s three key decision-makers has the qualifications to judge city planning, urban design, and architecture.

As for the bureaucrats serving them, their loyalties are evidently to the system. We, the general public pay the price. Obsolete, bureaucratic and anti-social, these evacuation and reconstruction projects should be redesigned as quickly as possible.

The fact that a great many architects (most of dubious talent) have cooperated fully with the municipality on these evacuation and reconstruction projects, is no less than shameful. Jerusalem will never be the same.

The problem is reflective of a deep moral and ethical malaise in our society. And of course it is not limited to Jerusalem, but nationwide. Matters have long ago gotten out of hand. Major reforms to our planning and building bureaucracy, including personnel changes, are urgently needed.

ABOUT THE AUTHOR Gerard Heumann is an architect and town planner in Jerusalem.

Looking for an owner of apartment in Talbiye or Rehavia

Searching for a English digital marketing expert for partnership

Give away couch and chairs

Seeking a financial partner for natural health product for noise