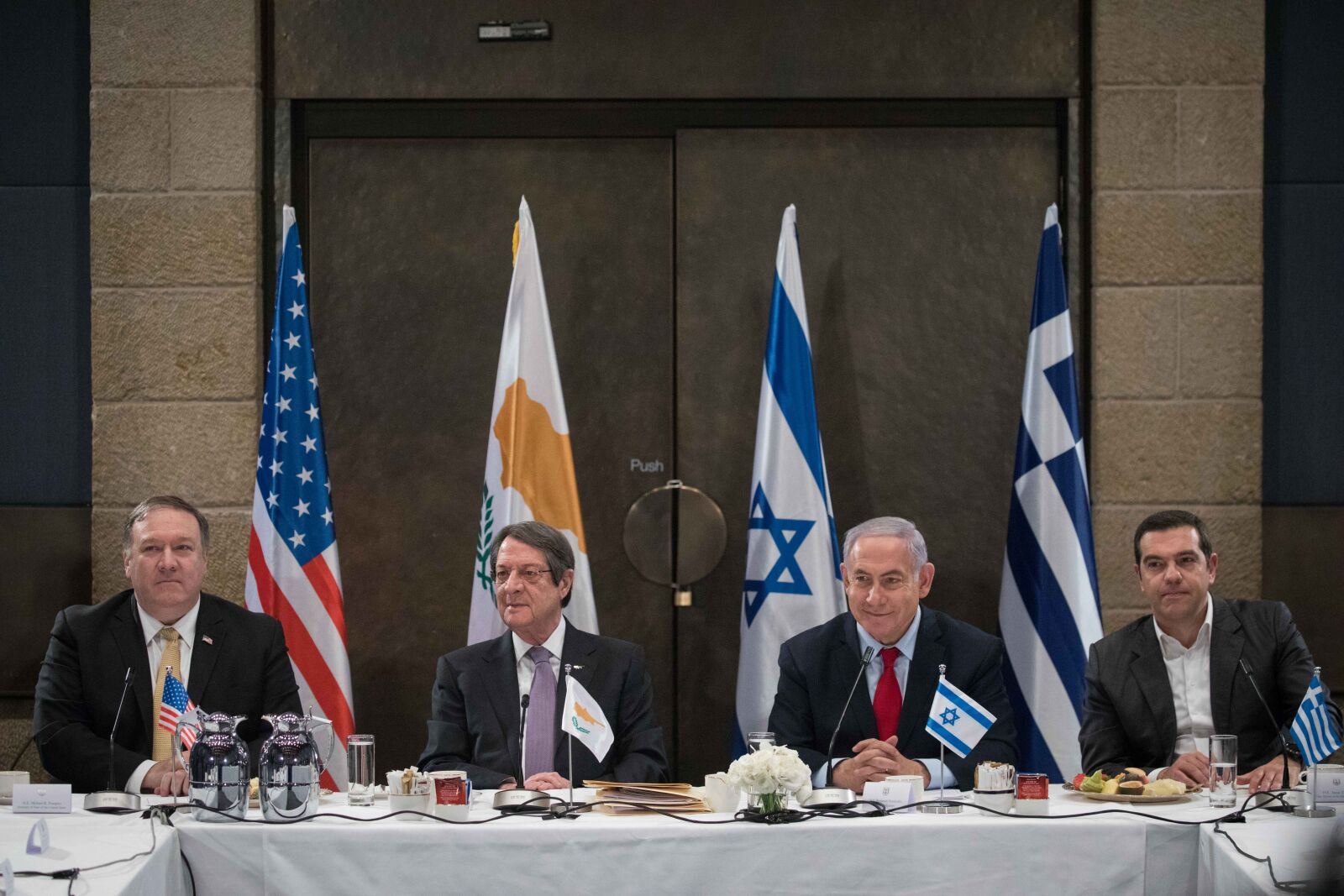 Jerusalem Institute for Strategic Studies via JNS
By Eran Lerman

Amid global turmoil and with Ankara seeking to lure away key regional players, the Greece-Israel partnership is a pillar of effective regional strategy.

Three events in recent weeks point to the importance of Greek-Israeli relations: the signing of a major deal whereby Israel will train the Hellenic Air Force; the participation (again) of the Israeli Air Force in the international “Iniochos” military exercise; and a meeting in Paphos of the foreign ministers of Cyprus, Greece, Israel and the United Arab Emirates.

This activity comes alongside growing uncertainty about global and regional events—making it more important for like-minded nations to stand together and coordinate their responses.

On April 16, 2021, the Greek Defense Ministry officially signed an agreement with Elbit Systems, a leading Israeli defense contractor, for a comprehensive training package for the Hellenic Air Force, including Italian M-346 training aircraft, Israeli avionics and an array of flight simulators closely modeled on Israel’s own training system. Evaluated at more than $1.6 billion over 20 years, this contract is unprecedented in scope and strategic implications. Israeli Defense Minister Lt. Gen. (res.) Benny Gantz noted that the understandings reached with his Greek counterpart Nikolaos Panagiotopoulos highlight the growing interaction between the Israeli and Hellenic armed forces.

The same can be said about the participation of elements of the IAF (including F-15i and F-16 jets and transport aircraft) in the major cooperative air tactics exercise of the Hellenic Air Force, called “Iniochos,” on April 2021 at the Andravida AFB (alongside participants from the United States, France, UAE, Spain, Cyprus and Canada). The Israel Air Force (IAF) has been participating in this exercise since 2015 (when the only other air force invited was that of the United States). The UAE has participated since 2017. The willingness of the UAE in 2017-2019 to train alongside the IAF was to some extent a sign of things to come.

This should be viewed in the context of other recent military cooperation exercises between Greece and armed forces, such as the (mainly naval) “Medusa” 2020, in November-December last year, in which Egypt, the UAE, Cyprus and France participated. All together, these constitute the building blocks of a strategic alignment clearly aimed at facing various dangers to regional stability in the eastern Mediterranean.

In the same spirit, Israeli Foreign Minister Gabi Ashkenazi met his Greek and Cypriot colleagues, Nikos Dendias and Nikos Christiodoulides, as well as former UAE Foreign Minister Anwar Gargash, in a newly established strategic forum in Paphos, Cyprus, to discuss a range of issues threatening regional stability. (The current Emirati foreign minister, Abdullah Bin Zayed Al Nahyan, took part virtually.) Thus, the “Abraham Accords” were once again linked to the commonality of interests in the eastern Mediterranean (alongside a shared perception of the Iranian threat).

There are obvious gains here for Israel. The IAF benefits from the opportunity to train in new and unfamiliar landscapes. Most significant of all is the strengthening of ties among the partners of what may be described as the “Abu Dhabi to Paris” chain of like-minded nations, with the partnership of Israel and Greece playing a central role.

For strategic, diplomatic, military, economic, social and even cultural reasons, this relationship has become a priority for Greece. (A leading Greek MP, professor Dimitris Keridis, said so explicitly in the wake of President Biden’s election victory in the United States.) In Israel, these developments should be viewed in the same light.

The need for close coordination is made more urgent given Turkey’s predicament and the intensive efforts of Turkish President Erdoğan to extricate himself from a tough situation. Ankara faces a distinct chill in its relations with Washington. President Biden’s first conversation with Erdoğan was over the U.S. decision to recognize the Armenian genocide of 1915, a highly loaded issue for Turkey. In response to this dramatic shift away from Trump’s often (over-) friendly attitude to Turkey, Turkish diplomacy is seeking to break apart the like-minded coalition in the region. This explains Turkey’s recent indications of some thaw in ties with Israel, reduction of tensions over Libya, a possible reset with Egypt (after years of open hostility towards President al-Sisi), and Turkish courting of the Saudis (who are dismayed with Biden’s policies in Yemen).

At this delicate point in time, Israel’s interest is not to close the door on possible dialogue with Turkey, but to make it very clear that in such a dialogue the needs (and fears) of Greece, Cyprus and Egypt should be on the table alongside those of Israel. Turkish support for Muslim Brotherhood subversion (including Hamas activities and incitement in Jerusalem) must cease. The map of the EEZ in the Mediterranean perhaps can be redrawn, but only if Israeli, Greek, Egyptian and Cypriot interests are respected, including unhampered access, by pipeline or otherwise, to European markets. Therefore, Greek and Egyptian efforts (backed by France) to ensure that Libya does not become a strategic adjunct of Turkish policy need to be supported. If Turkey wishes to retrieve lost ground in Washington, it needs to take these positions into account.

To sustain this position, it is important for participants of the “Paphos Forum” to act in close coordination. The immediate challenge is to counter, from a position of strength, Erdoğan’s attempts to shatter the alignment of forces developed in recent years.

IDF Col. (res) Dr. Lerman is vice president of the Jerusalem Institute for Strategic Studies. Lerman was deputy director for foreign policy and international affairs at the National Security Council in the Israeli Prime Minister’s Office. He held senior posts in IDF Military Intelligence for more than 20 years and teaches in the Middle East Studies program at Shalem College in Jerusalem.

This article was first published by the Jerusalem Institute for Strategic Studies.