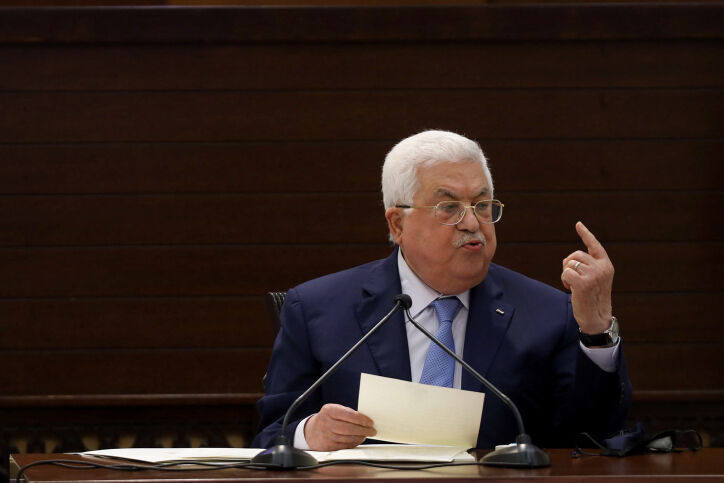 Jerusalem Center for Public Affairs via JNS
By Yoni Ben-Menachem

The Palestinian leader’s international campaign over the right of eastern Jerusalem residents to participate in upcoming elections may be the ladder allowing him to climb down from the electoral tree.

The Palestinian Authority has launched an international campaign to force Israel to allow eastern Jerusalem residents to participate in P.A. parliamentary elections on May 22, 2021.

At a meeting of the Palestinian government, P.A. Prime Minister Mohammad Shtayyeh revealed that the P.A. had sent letters on the issue to the United Nations, the European Union, the United States and Russia.

Wasel Abu Yousuf, a member of the PLO’s Executive Committee, said that the participation of eastern Jerusalem residents in the parliamentary elections was of great importance when Israel was trying to make the city its unified capital.

Senior P.A. officials say that the P.A. wants to use the campaign for the participation of eastern Jerusalem residents to quash and erase the Trump administration’s declaration of Jerusalem as Israel’s capital.

The P.A. sent an official letter to Israel in February of this year requesting its approval for the participation of eastern Jerusalem residents in the elections. Israel responded with an official letter stating that a response would be given after the March 23 Knesset elections. The P.A. has not yet received any official response from Israel. The E.U. also appealed to Israel’s Justice Minister last month to approve of the arrival in the West Bank and eastern Jerusalem of international observers in preparation for the elections. The E.U. has not received a response from Israel, either.

However, Israel’s political echelon dispatched Israel Security Agency (Shin Bet) Director Nadav Argaman to Ramallah for a meeting with the P.A. chairman, insisting that he cancel the elections due to the danger Hamas participation in them poses to the security of both the P.A. and Israel.

Abbas rejected the Israeli demand outright, and also turned down a similar request from Egypt and Jordan.

Meanwhile, things have gotten complicated in the Fatah arena: Marwan Barghouti (in prison for five terrorist murders) decided to establish a joint list with Nasser al-Qudwa (Yasser Arafat’s nephew) to run in the elections, which threatens to overwhelm Abbas’s party list. In this scenario, the Fatah movement will run on three separate tickets (led by Abbas, Barghouti/al-Qudwa, and Muhammad Dahlan). This split will weaken Fatah and increase Hamas’s chances of winning the elections.

Abbas isn’t giving up, although he is in a severe political predicament. He continues to offer enticements to Barghouti to withdraw from the joint list with al-Qudwa, but senior figures in Fatah, who fear defeat in May, demand that Abbas postpone or cancel the elections.

Israel’s security cabinet has not yet convened to discuss eastern Jerusalem residents participating in the elections, but there is a consensus in the security establishment that the Palestinian elections are dangerous for Israel. After the head of the Shin Bet was sent to warn the P.A. chairman, it is unlikely that the political echelon in Israel will change its mind.

It is possible that Abbas appreciates the danger as well, and that he therefore ordered the political offensive against Israel over eastern Jerusalem to show the residents of the territories that he is fighting to the end on the issue of Jerusalem, the “red line” for the Palestinians. Or in other words, that this campaign is intended to serve as the ladder that will allow Abbas to climb down from the electoral tree. Having tried all possible ways to secure the participation of eastern Jerusalem residents in the election with no success, he will then be able to rationalize the elections’ postponement.

On April 5, 2021, the P.A. chairman left for Jordan and then Germany for medical treatment. While in Germany, he had been scheduled to meet with German Chancellor Angela Merkel. On April 7, the German Deputy Government Spokesperson said, “their personal meeting during Abbas’ visit in Berlin this week did not take place due to the pandemic-related issues and Merkel’s busy schedule.”

The P.A. insists that the condition of 86-year-old Abbas is good and that his medical visit was for a routine scheduled appointment. The P.A. rejects the possibility that the medical treatment was intended to prepare Palestinian public opinion for the postponement of the elections.

Yoni Ben Menachem, a veteran Arab affairs and diplomatic commentator for Israel Radio and Television, is a senior Middle East analyst for the Jerusalem Center. He served as director general and chief editor of the Israel Broadcasting Authority.

Caption: Palestinian Authority leader Mahmoud Abbas speaks during a meeting of the Palestinian leadership in the West Bank city of Ramallah, Sept. 3, 2020.
Photo by Flash90.