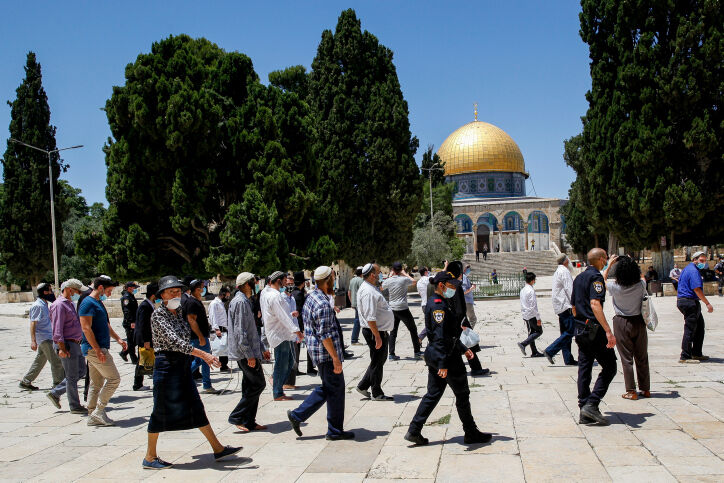 A public disagreement between Reform Rabbi Eric Yoffie and Orthodox Rabbi Meir Soloveichik regarding Jewish prayer on the Temple Mount represents an opportunity to reflect on the lessons of history.

The spark that ignited this literary dust-up is an essay in the September issue of Commentary by Rabbi Meir Soloveichik, supporting freedom of worship for Jews at Judaism’s holiest site, the Temple Mount in Jerusalem. The Israeli authorities currently permit small groups of Jewish worshippers to gather in one corner of the 37-acre plateau.

Writing in Ha’aretz, Rabbi Eric H. Yoffie, former president of the Union for Reform Judaism, called Rabbi Soloveichik’s position “idiotic and potentially catastrophic,” because it “may lead to holy war between Jews and more than a billion Muslims.” The Al Aqsa mosque is situated in one part of the plaza, and Muslim leaders oppose Jews praying anywhere in the vicinity.

The accusation that Jews are to blame for provoking Arab violence has a long history.

In 1929, for example, the American consul-general in Jerusalem, Paul Knabenshue, claimed that the Arab massacre of 67 Jews in Hebron was the result of “provocative acts” by Jews in Jerusalem, such as demonstrating for Jewish prayer rights at the Western Wall.

In her book “The Year After the Riots,“ Prof. Naomi Cohen describes Knabenshue’s harsh position regarding the Wall in terms that echo some of today’s discussions about the Temple Mount: “Individual Jews only and not organized religious services should be permitted there.”

American Jewish anti-Zionists shared Knabenshue’s perspective. A headline in the Yiddish-language Communist newspaper Freiheit declared: “Zionist-Fascists Have Provoked the Arab Uprising.” Reform rabbi William Fineshriber of Philadelphia charged that the Zionist goal of a Jewish majority in Palestine was “enraging the Arabs” and “will lead to more massacres.” His colleague Rabbi Louis Wolsey claimed the “political” tone of “Zionist propaganda” provoked the Hebron pogrom.

Fear of possibly provoking Arab hostility played a significant role in President Franklin D. Roosevelt’s wartime Palestine policy. In 1942, FDR rebuffed a proposal by World Zionist Organization president Chaim Weizmann to permit the Jews in Palestine to organize an army to defend against a German invasion; such a move, Roosevelt said, would antagonize Egypt. A frustrated Weizmann privately commented that Roosevelt was “trying to appease a rattlesnake.”

In 1943, President Roosevelt refused to let more than a handful of European Jewish refugees enter Allied-occupied North Africa, for fear that admitting more Jews would “stimulate the religious situation there” and “result in the death and destruction of several hundred thousand American soldiers.”

FDR even rejected a request to allow the Palestine (Jewish) Symphony Orchestra to name one of its theaters the “Roosevelt Amphitheatre,” lest that antagonize “the Arab peoples.”

The president specifically invoked the term “jihad” in 1944, when American Zionist leaders Stephen Wise and Abba Hillel Silver asked him to endorse a congressional resolution urging the British to permit the “free entry” of Jewish immigrants into Palestine. “Do you want to start a Holy Jihad?” FDR berated Wise and Silver. “If you people continue pushing this recommendation on the Hill, you are going to be responsible for the killing of a hundred thousand people”—because “enraged Arabs” might attack Americans in the Mideast in revenge.

Similar arguments were used by senior State Department and War Department officials in their attempts to persuade President Harry Truman to oppose the creation of the State of Israel in 1948. Fortunately, Truman overrode them.

The task of navigating between which actions Israel or the Jewish people can take without significant risk of repercussions, and which actions would lead to a war with “a billion Muslims,” has never been a simple matter.

If fear of provoking a jihad had been the decisive factor in Zionist policymaking before 1948, the world would look very different today. Not only would Jews never have demanded prayer rights at the Western Wall, but the State of Israel would never have come into existence.

These concerns have to be considered even when Diaspora Jewish leaders are merely staking out policy positions, since anything they write or say could wind up in the Arab news media the next day.

No doubt Rabbi Yoffie himself wrestled with the possible impact on Arab-Jewish relations before he spoke at a 2001 Reform conference about “the growing use of anti-Semitic and neo-Nazi language” in the Palestinian Authority’s media. He asserted that there is “a direct line” between that language and “Palestinian terror.”

Likewise, in 2018 Rabbi Yoffie denounced P.A. leader Mahmoud Abbas as “ignorant” (after Abbas called Israel “a colonialist enterprise that has nothing to do with Judaism”). Later that year, he said that a remark by Palestinian spokesperson Hanan Ashrawi was “a damnable lie” that had “antisemitic overtones.” Was it wise to use such terminology to characterize two of the most revered leaders of the Palestinian Arabs, in view of the risk of provoking Arab animosity?

Those were not easy calls for Rabbi Yoffie to make.

Perhaps even more relevant to the Yoffie-Soloveichik dispute regarding the Temple Mount is the position Rabbi Yoffie took following the relocation of the U.S. embassy in Israel from Tel Aviv to Jerusalem. At the time, the Union for Reform Judaism expressed concern that the move could “undercut” peace efforts “and risk destabilizing the region.” That was not quite the same as saying it could cause “a holy war,” but it was pretty close.

Rabbi Yoffie, writing in Ha’aretz, dissented from his organization’s position. He called the U.S. recognition of Jerusalem as Israel’s capital and the relocation of the embassy “comforting and gratifying.”

Perhaps rabbis Yoffie and Soloveichik will yet be able to find some common ground on the Temple Mount issue. Or perhaps they will just agree to disagree. Either way, they have given the Jewish community a lot to think about, and an opportunity to reflect on how the lessons of history may be useful in grappling with today’s controversies.

Dr. Rafael Medoff is director of the David S. Wyman Institute for Holocaust Studies and author of more than 20 books about the Holocaust and Jewish history. This essay is based in part on the research for his most recent book, “The Jews Should Keep Quiet: Franklin D. Roosevelt, Rabbi Stephen S. Wise, and the Holocaust.”

This article first appeared in the Jewish Journal.

Caption: Israeli security forces escort a group of religious Jews as they visit the Temple Mount in Jerusalem's Old City, after it was reopened to the public, May 31, 2020.
Photo by Sliman Khader/Flash90.

Report: Some prisoners at Gilboa facility were ‘aware of escape plot’ in advance

‘If you build it, they will come’: The blessings of the holiday sukkah