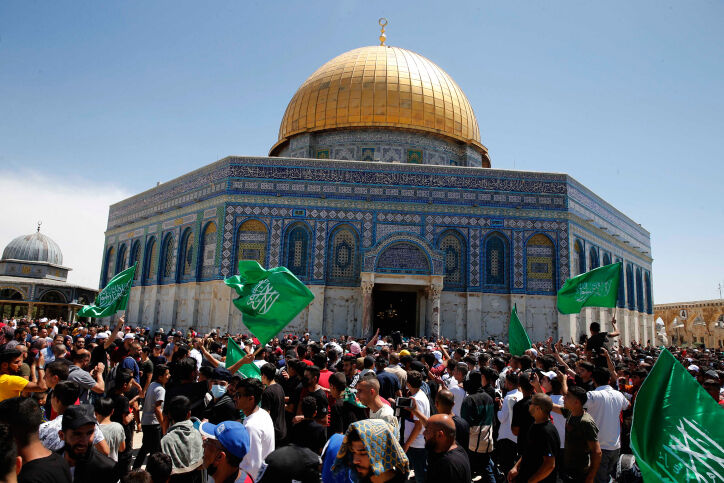 It appears that Israel’s “Operation Guardian of the Walls” did not deter the terrorist group, which is again threatening violence in an attempt to alter the status quo in Jerusalem.

The “Gaza-Jerusalem” equation, set by Hamas on Jerusalem Day (May 10) by firing rockets at the Israeli capital, could become permanent if Israel does not prevent its practical realization. Hamas must not be allowed to set new rules for the game.

The annual Jerusalem Day flag march in the city was canceled following the outbreak of hostilities. It was rescheduled for June 10, but the Israel Police refused to authorize the route, which included the Old City’s Damascus Gate and Muslim Quarter, citing security concerns. Israel’s Security Cabinet decided on June 8 to postpone the march to June 15, after the expected swearing-in of Israel’s new government, pending an agreement between police and organizers on a framework for the event.

The Hamas leadership initiated a calculated offensive on Israel, one planned by Mohammed Deif, head of the movement’s military-terrorist wing. Following P.A. leader Mahmoud Abbas’s cancellation of the Palestinian elections in April, Hamas, feeling robbed, launched a terrorist rocket campaign against Israel. Its aim was to increase Hamas’s influence on the Palestinian street in eastern Jerusalem and the West Bank.

The terrorist group now positions itself as the “Defender of Jerusalem and al-Aqsa,” while at the same time undermining the P.A.’s status. Hamas wishes to force Israel to take into account its position when dealing with the Temple Mount and eastern Jerusalem. This equation is very dangerous to Israel’s security. Israel must immediately sever this nascent link, via a determined response in eastern Jerusalem and the Gaza Strip.

“The equation that connects the Gaza Strip to Jerusalem is strong and permanent. The Gaza Strip has responded to the calls of Jerusalem. We will continue until the Israeli occupation stops all aggression and terrorism in Jerusalem and at the al-Aqsa Mosque. Jerusalem has established a new balance of power politically and in the territory itself, and the will of our people will prevail.”

The Biden administration has sent messages to Israel to refrain from unilateral measures in Jerusalem that could lead to a flare-up. Security officials have warned that a flag parade at the Old City’s Damascus Gate or the Muslim Quarter of the Old City could cause an immediate escalation not only in eastern Jerusalem but also in Arab population centers inside the “Green Line.”

Israel must establish a clear policy on eastern Jerusalem and the Temple Mount. It appears that Israel’s “Operation Guardians of the Walls” did deter Hamas; the terrorist group is again threatening violence, in an attempt to force its “Gaza-Jerusalem” formula on Israel. Hamas hopes to take advantage of Israel’s sensitive political situation and expected change of political power to establish its new equation as a fait accompli.

It is, therefore, of great importance that the incoming government reassert full Israeli sovereignty, with no compromises, over eastern Jerusalem and the Temple Mount.

Israel has enough leverage over the Hamas leadership to tear apart the new equation they are trying to impose. Hamas is weaker than it was before the “Guardian of the Walls.“ Actions Israel could take include:

1. Refuse to open the border crossings or increase the size of the Gaza fishing zone.

2. Reduce or cut the supply of electricity from Israel to the Gaza Strip.

3. End the delivery of Qatar’s monthly monetary grant, especially in light of the remarks by outgoing Mossad director Yossi Cohen. In a June 7 lecture to the Friends of Bar Ilan University, Cohen admitted that relying on Qatar to calm the region was a mistake. Security officials say that most of the Qatari money authorized by Israel to enter the Gaza Strip was ultimately used for Hamas’ military buildup.

4. Slow the indirect negotiations regarding a prisoner exchange deal. Hamas sees great significance in showing the Palestinian street that the recent war has resulted in real achievements, and securing the release of hundreds of terrorists in a prisoner exchange is no less important to it than the Gilad Shalit deal (when 1,027 were released) in 2011. If such a deal is implemented now, it will further strengthen Hamas’s stature on the Palestinian street and weaken the P.A. Israel should be in no rush to reach a deal Hamas wants to implement on its terms for political gain.

Israel should let Hamas stew in its own juices. Israel is much stronger militarily, and must not allow Hamas to dictate new rules of the game, even if this means another round of fighting in the Gaza Strip. Only an aggressive policy will restore deterrence.

Hamas is trying to drag Israel into a war of attrition, consisting of short rounds of fighting, to establish the “Gaza-Jerusalem equation.” The next round of fighting may have to include the entry into Gaza of IDF ground forces to dismantle terrorist infrastructure there. The IDF is perfectly capable of conducting such a ground operation without occupying the entire Gaza Strip. It is time to change the situation of incessant rounds of fighting in the Gaza Strip and move on to a more creative and effective strategy.

Yoni Ben Menachem, a veteran Arab affairs and diplomatic commentator for Israel Radio and Television, is a senior Middle East analyst for the Jerusalem Center. He served as director general and chief editor of the Israel Broadcasting Authority.

Caption: People wave Hamas flags outside the Dome of the Rock in Jerusalem, May 7, 2021.
Photo by Jamal Awad/Flash90.