Following a complex process that lasted several weeks, the Rhodes Scholarship selection committee has chosen two Israeli scholarship recipients for the year 2022: Eden Raviv from Tel Aviv and Haroon Avgana from Kfar Kama were announced as the winners of Oxford University's Rhodes Scholarship on Monday. The two will begin their studies at Oxford in October 2022.

The Rhodes Scholarship for graduate studies at Oxford University is one of the most prestigious academic scholarships in the world, and Oxford, by all international indices, is ranked as one of the best universities in the world. The scholarship (named for Cecil Rhodes) has been around for over a hundred years, beginning in 1903, and is awarded to outstanding students from all over the world.

Eden Raviv, originally from California, moved to Israel upon finishing high school and served as a lone soldier in the IDF. She received a BA in Government Diplomacy and Strategy, where she was first in her class throughout her degree and participated in the Argov Fellows Program in Leadership and Diplomacy at Reichman University. Eden was president of the debate society during her undergraduate degree and hopes to continue debating at Oxford and to pursue an MPhil in International Relations. "I look forward to meeting Scholars from around the world and learning from their unique perspectives". 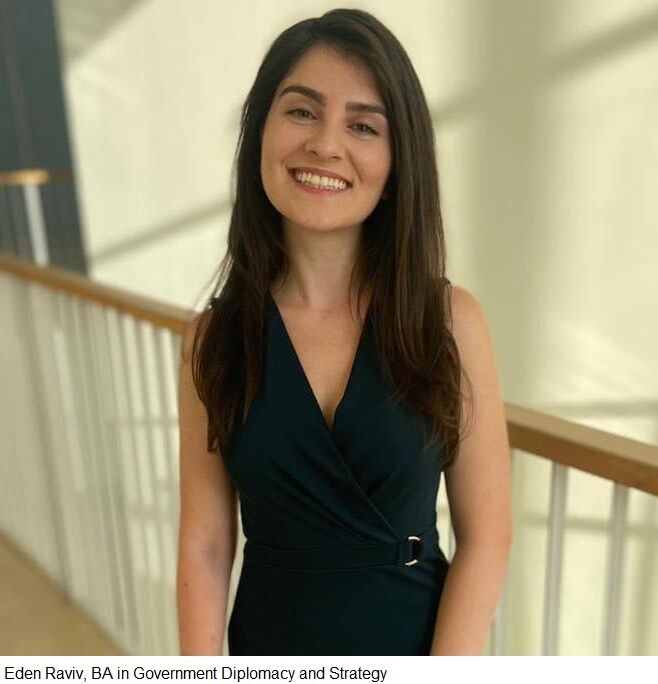 24-year-old Eden Amare Yitbarek was born in Israel and raised in Ethiopia. She graduated from Reichman University with honors with a bachelor’s degree in Government, Diplomacy and Strategy. During her studies, she made the Dean’s List all three years of her studies, was granted the “Israel at Heart” scholarship, and was selected for the Argov Fellows Program for Leadership and Diplomacy. In 2018, she interned at the United States Holocaust Memorial Museum in Washington, DC. She also volunteered as a teacher for refugees and migrant children and worked with the refugee resettlement program. Eden was the first student from Reichman University to receive a Rhodes Scholarship. Eden is currently pursuing her master’s at Oxford in Evidence-based Social Intervention and Policy Evaluation.

Both Eden Raviv and Eden Amare Yitbarek took part in the Argov Fellowship Program while studying at Reichman University. Through a year-long, challenging interdisciplinary curriculum taught entirely in English, the program seeks to help the students acquire the knowledge, tools, skills and critical thinking abilities necessary for working towards meeting the many challenges that Israel faces in today’s complex global environment.

According to Dr. Alisa Rubin, Founding Academic Director, Argov Fellows, "The fact that Israel's two Rhodes Scholars are Argov Fellows from Reichman University is not surprising to me. In the program, we try to help students realize their potential and fulfill their dreams of leading path-breaking change around the world in a wide range of fields. Our alumni can be found all over the world, including our first Schwartzman Scholar, Keren Guttman currently studying at Tsinghua University in Beijing. Our individual approach to each student as well as the key training they receive in communication, research, writing and team-work skills is instrumental to these achievements".

Jonathan Davis, VP of External Relations and Head of the Raphael Recanati International School remarks, "We are so proud of the personal achievements of these students. Glad our modest contribution to their academic excellence, leadership, and humanistic Zionist values have paid great dividends for their personal development. I am sure the late, revered Ambassador Shlomo Argov, for whom their honors program is named, and former Ambassador of Israel to the United Kingdom would be very proud.”

Advertising Agency for Anglo Businesses and the Anglo Community in Israel