Meet the man who ran the Israel Trail in 10 days 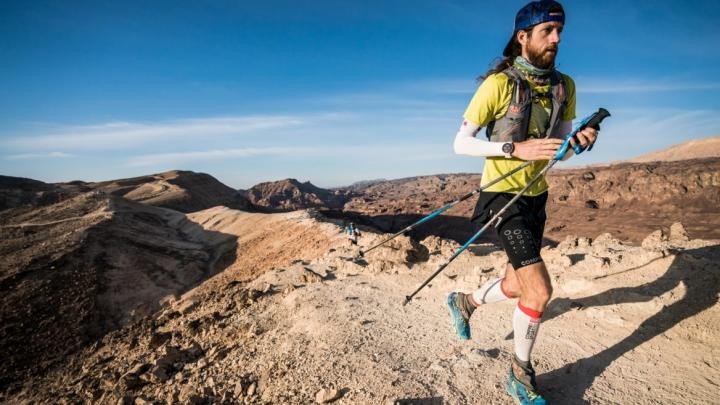 Michael Wardian got into running by chance. Luckily for him, he found he’s incredibly good at it.

“I played lacrosse when I was young and I stopped playing lacrosse in college and picked up running just to stay fit,” the 45-year-old Virginia native tells ISRAEL21c. “And then I got hooked with running.” Michael Wardian on the Israel Trail. Photo by iancorless.comproject #fktisrael

His latest adventure took him to Israel, where he traversed the entire Israel National Trail, a hiking route that runs 1,100 kilometers, or 683 miles, from Eilat in the south to Kibbutz Dan in the north.

“It was something that was manageable in terms of distance. It’s not as far as running across the US, for example,” Wardian notes. “It turned out it was a perfect trail for the length of what I wanted to do.” Michael Wardian displays the American and Israeli flags after completing his run of the Israel Trail, March 22, 2019. Photo by iancorless.com project #fktisrael

Since completing the Boston Marathon in 1997, Wardian has become a professional marathon and ultra-marathon runner, in addition to being a fulltime international shipbroker.

“I think I might be one of the only people to win a marathon on all seven continents and the North Pole,” he says.

Ultra-marathons, for any lay people out there, can range from 30 to 100 miles (a standard marathon is 26.2 miles).

Wardian ran his first ultra-marathon “just because I thought it wasn’t possible. And of course it is true, you can run that far and you can actually run that far pretty fast,” he says. “It’s just crazy how your definition of what’s possible changes once you have more information.” Wardian arrived in Israel at the invitation of Zoli Bihari of Canaan Running Adventures, an initiative that promotes outdoor adventures and cross-country running in Israel.

Bihari accompanied Wardian (although not by foot!), as did photographer Ian Corless, who documented the experience.

“We started on March 12 and ended on March 22,” Wardian says, breaking the previous record of 15 days to run the trail. Michael Wardian and companions running as the sun sets in Israel. Photo by iancorless.com project #fktisrael

“Each day we had a goal for the day. The idea was to run about 100 kilometers a day; we were pretty close to that,” he says. “We would run anywhere from 10 to maybe 20 kilometers and then there could be a chance to stop and refuel.”

When Wardian says “we,” he refers to members of the local running community who joined him on some days for parts of his journey. Sometimes he was accompanied by one or two runners, and sometimes by 20. “It was like Forrest Gump,” he chuckles.

“That was actually my favorite thing about the adventure, getting to share that with people,” he adds. Cap 4: Michael Wardian was joined by Israelis on his running trek along the Israel Trail. Photo by iancorless.com project #fktisrael

Wardian was also excited by the diverse terrain he discovered along the way.

“I really enjoyed the desert. That to me was beautiful. The part around Timna, the park down there, and Mitzpeh Ramon,” he says.

Going from that to the snow-capped peaks of Mount Hermon at his journey’s end was a surprise for him. “I didn’t even think that was a thing,” he says. Another favorite of his was running across the park in Tel Aviv and having the sea open up in front of him. “I got teary-eyed there; it was super special.”

The whole experience, he notes, left its mark on him.

“For me it was one of the most life-changing experiences I ever had. It gave me an unbelievable amount of confidence but also belief in humanity,” he says. “People of all different backgrounds, religions and cultures would help a random stranger achieve something, just because.

“One of the coolest parts was that people would come back day after day. The opportunity to get to share experiences with people and learn about them and the culture of Israel was life-altering,” he adds. Michael Wardian ran the length of the Israel Trail in March 2019. Photo by iancorless.com project #fktisrael

Would he come back to visit?

“Oh yeah. I so want to come back and bring my family,” he says, referring to wife Jennifer and sons Pierce and Grant.

“I’ve been twice to Israel now and I’ve never seen the tourist sites, so I need to come back and see the Jerusalem market and the historical stuff,” he says, before quickly adding he might try out the Jerusalem Marathon.

Speaking of which, does he have any tips for the beginner runner?

“The thing that served me the most was just to try and be consistent,” he says. “It definitely takes a couple of weeks to get into it, but once you do you’ll start seeing improvement.”