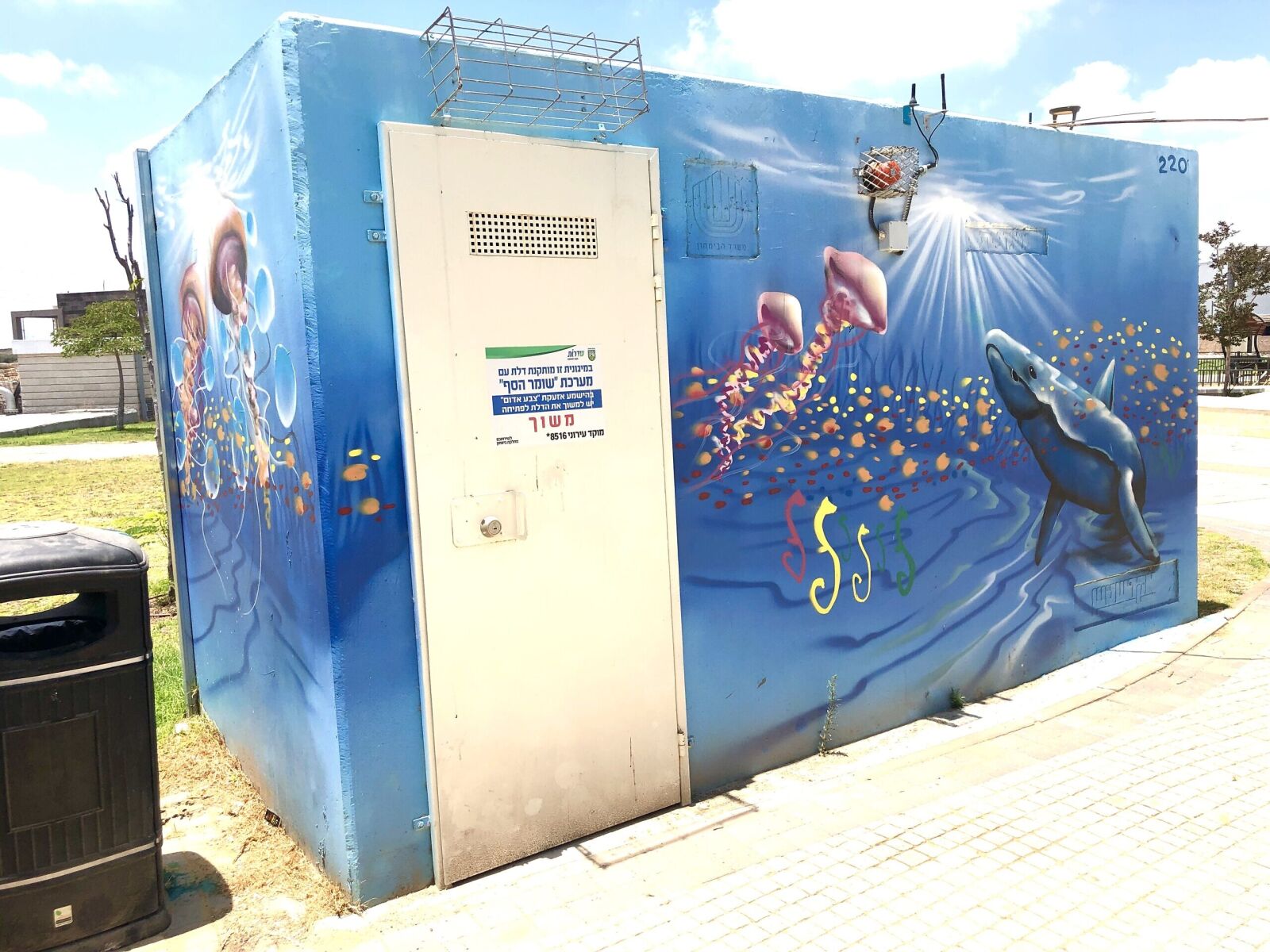 Around 30,000 people live in Sderot and most plan on staying despite living under the constant threat of rocket attacks from Gaza.

In any other country Sderot would be just an idyllic, well-maintained small town. But in southwestern Israel, less than a mile from the border with Gaza, it’s all that as well as a place where almost everyone suffers from PTSD.

The post-traumatic stress disorder, that affects residents of all ages in Sderot, is caused by both the threat as well as the reality of thousands of rocket and missile attacks launched from Gaza since 2001.

In any other country it’s fair to assume that a town where the neighbors seek your annihilation would not be a place that’s expanding, building new neighborhoods, creating hi-tech jobs, hosting large institutes of higher learning, or opening new museums. But that’s exactly what’s happening in Sderot.

On a recent visit hosted by The Max and Ruth Schwartz Hesder Yeshiva of Sderot, visitors learned that the population has grown by more than fifty percent since 2000. Today, around 30,000 people make their home in Sderot and eighty-two percent of them say they plan on staying.

Each one of those residents has 15 seconds or less to run to a protected room or to one of the many reinforced bomb shelters scattered around town when the sirens sound warning of incoming rockets.

But along with that reality, which Mayor Alon Davidi acknowledges is an abnormal way of living, there’s a new Founder’s House Museum and the Roklen Resilience Center that will be opening in a few weeks. In the industrial zone there’s a shiny four-year-old building that houses a branch of Amdocs, an Israeli multinational tech giant in the field of communications and media automation, and in the geographic center of town sits the largest Hesder Yeshiva in the country.

“Maybe because of the rockets we became strong,” says Davidi. The key is resilience, he emphasizes. “It can be that five days of the week everything is fine and then everything can change in an instant,” he explains.

The challenge is to accept the reality and build, he says. “Terror helps you understand your purpose here. We understand what it is to be a Zionist. Hamas has not beaten us,” he states firmly.

The Mayor describes how, of his seven children between the ages of 10 and 24, “five were born to terror.” Rockets fell twice in the yard of the Davidi home, and in their neighborhood one house was hit three times over the years. Everyone, he says, including members of his own family, suffers from PTSD, but they’re resilient.

Israel’s social security system (Bituach Leumi) covers 24 therapy sessions for kids and 12 for adults, but until this week they took place in an unprotected building where sessions were interrupted when the sirens sounded. The Roklen Resilience Center, a project of JNF USA and Bituach Leumi, that opened its doors this week is a reinforced building with designated rooms for individual and family treatment, and special activity rooms for kids.

In Sderot there’s no stigma to receiving therapy, notes Ephraim Rosenfeld, one of the fifty therapists and social workers attached to the center. “Everyone comes.”

Rosenfeld leads visitors to the nearby Animal-Assisted Therapy Center, where he is specially trained to use the animals to facilitate kids to express their fears and feelings. “Kids also learn how animals respond to fear and danger,” he adds.

“We have a lot of experience with PTSD, but we never get to the ‘post’ of post-trauma, it’s constant trauma,” Rosenfeld states. He says Sderot is the center for teaching resilience and trauma response to others, and recently therapists from the Resilience Center traveled to Ukraine to help the Jewish community there.

Bringing visitors to Sderot is another way to combat trauma and garner support. Rabbi Ari Katz, Director of Public Relations for The Sderot Hesder Yeshiva acknowledges that if it were not for the rockets, in all probability people would not be visiting the town.

Rabbi Katz is confident that The Founder’s Museum, located close to the Resilience Center, will be an attraction for visitors. When it opens in August the compact interactive museum designed by the prestigious Diskin Design Group will tell the story of Sderot focusing on the creativity emanating from the town rather than the security situation.

Many prominent Israeli musicians got their start in Sderot, and the first gallery of the museum highlights the music of figures like Kobi Oz, Teapacks and Hagit Yaso. There’s a mock-up of a recording studio as well as a room dedicated to the history of the founding of the town.

The new Moskowitz Park at the western edge of Sderot could become another tourist attraction. The $2 million park features huge and intricate play structures for those of all ages, open space and a beautiful man-made lake surrounded by flowers. Unlike many Israeli leisure sites, the park is never crowded, notes Rabbi Katz and could be a favored destination for families on national holidays when it’s hard to find space in other parks.

No town can survive without adequate employment and Sderot’s growing industrial zone now includes high tech as well as more traditional light manufacturing companies. In addition to being the home of one of the largest Hanukkah candle manufacturers in the world, Sderot also boasts a branch of Amdocs, the communications giant that services dozens of the world’s largest media companies.

One of Amdocs’ 700 employees in Sderot is Yan Davidovsky who leads an international software engineering team. He explains that 30 percent of the staff live in Sderot. “We have no problem attracting and retaining qualified employees,” he tells JNS.

Back in the center of the residential district, the Sderot Hesder Yeshiva is also attracting hundreds of students. Building is underway for additional dormitories that surround the central three-story Beit Midrash building.

Founded in 1995 by U.S.-born Rabbi David Fendel, the Yeshiva now has 600 male students, who combine military service with Torah studies, and an affiliated program for young women. It’s an anchor for the city, bringing in rabbis to teach and encouraging graduates to stay in Sderot once they’re married.

Rabbi Katz points out that the yeshiva students play an active role in community life by taking part in the neighborhood watch and cleaning up after rocket attacks. They fan out to visit and assist elderly residents and run a Big Brother program.

From the roof of the Yeshiva it’s possible to catch sight of Gaza as well as the cranes hovering over the many new construction projects around Sderot.

Gazing over the expanding town, past the menorah fashioned from rocket shells that sits atop the roof, it’s not hard to share the view of Mayor Davidi. “Maybe the situation won’t change for many years,” he tells JNS, “but it’s not because of us. This place could be paradise, but the reality is that Hamas won’t hear of it. They’re destroying the future of their children.

“But I can’t wait for them to change,” Davidi insists. “Once you understand the reality you can start to move. That’s my job and I love every moment of it.”

Caption: A protected space in Moskowitz Park in the Israeli town of Sderot, which is located along the border with the Hamas-ruled Gaza Strip. Doors to the space open automatically when sirens warn of incoming rockets.
Credit: Judy Lash Balint.