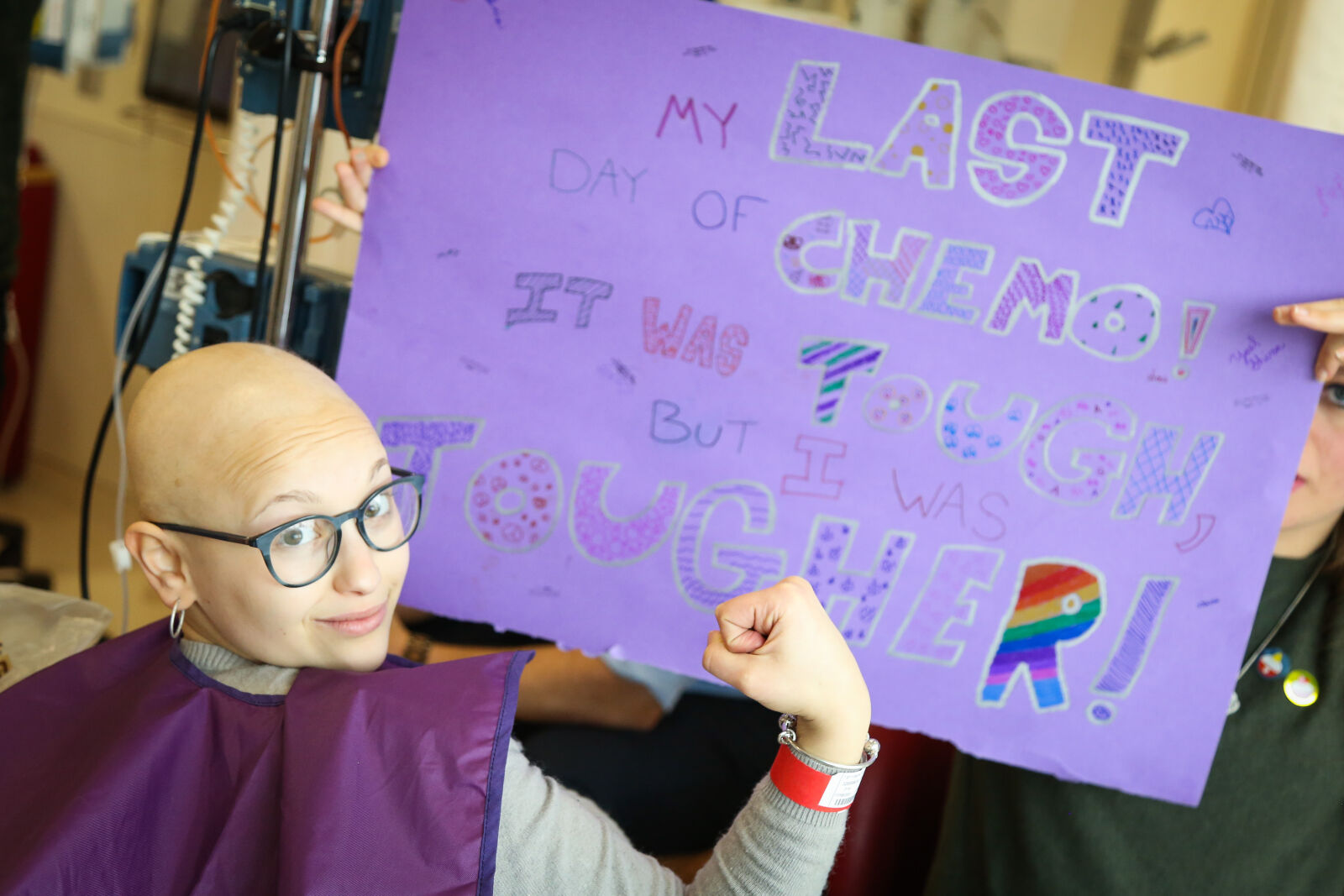 It was an ordinary night in October, 2018, I was washing my face and noticed a bump on the left side of my neck. I was only 16 at the time but it did seem rather strange to me, especially because I’ve heard of lumps being cancerous, but I quickly brushed off the thought and told myself it was probably a swollen gland. I asked my father to feel it, just to make sure it really was nothing, but my father wanted me to see a doctor. He said it felt like a swollen lymph node. At the doctor's office they did blood work and said all my blood was fine, so it was probably nothing, but because it was a hard lump and it did hurt me, they decided to send me to get a biopsy.

What I didn’t know, was that my life was about to change drastically.

I found myself lying on a gurney in the ER waiting for yet another doctor to feel my awful bump, to give me that concerned look, ask me a million questions, and then leave me again in the cold empty room with the bare yellow walls, to wonder what on earth was going on. Another ultrasound, and the bump really started to hurt.

The pain got me thinking on some names, and so it was- Freddy. I was wheeled into a big room and placed on a cold exam table where they stuck a really big needle in my neck. An hour later I was discharged with a numb neck, an ice pack and a bloody shirt. The next week was really strange; it was as if I knew something bad was going to happen. I made the biggest mistake and used google to search “swollen lymph nodes” and of course, all the results were cancer!

I pushed the thought of cancer out of my mind and told myself I was okay. Later that week I was in school and the bump (Freddy) was really hurting. It almost felt as if it was making its way down my neck to my chest. I went over to my friend and asked her: “If I had cancer and all my hair fell out, would you shave your head to look like me?” My friend was shocked and all she said was, “Atara please, you don’t have cancer”.

Friday, November 2nd, felt like the longest car ride to the hospital; the tension in the car was palpable and my parents seemed extremely stressed. When we arrived at Shaarei Tzedek medical center, a tall Doctor introduced herself as Dr. Iris, and she told us to step into her office. She started off by saying that all I needed to know was that I was going to be okay, and that the results came back and I had something called Hodgkins Lymphoma. I didn’t know what Hodgkin’s lymphoma was, but I was just so relieved it wasn’t cancer. I kind of tuned out the rest of the things Dr. Iris said until I heard her say I would need to come in every other week for chemotherapy.

My heart dropped, why would I need chemo? Only then the doctor realized I didn’t get it, “Hodgkins Lymphoma is a type of cancer”, she said. My head started spinning, and I felt my whole world crashing before me. How could it be? Was this really happening to me? Me of all people? Cancer was for sick, bald kids. I looked at my parents’ and they looked at me. We were all shocked. But as I looked into their eyes, I saw how much they believed in me, how I could handle this, how I could get through this. I will be okay. I suddenly felt this wind of strength picking me up, as if God himself was holding me, telling me he was right here. It was at that moment that I decided I was going to accept this challenge as a gift, make the most of it.

I started chemotherapy on November 11th (a week after the diagnosis), 4 bags a day, every other week. When I saw the color of one of the bags of chemo I thought it was the coolest thing even though it was red, it was the same color as my Gatorade! Later that day, while getting the bag of chemo, the nurse told me this was the chemo that makes your hair fall out. Red liquid wasn’t that cool anymore. I started to feel really nauseous and they gave me medicine that did not help. I couldn’t eat because I was so nauseous and I kept throwing up. Turns out chemo is terrible, and dehydrates you.

After the second round of chemo my hair started to fall out, but I was prepared. Before I started chemo I cut my hair and made a wig. I left some hair on my head in the shape of a Mohawk which I dyed blond and blue to make it more exciting. I woke up one morning and saw little blue hairs on my pillow, that’s when I decided to shave my whole head.

Being bald wasn’t easy. I got the “pity stare” which I hated, people were scared of me, and a few kids even made fun of me. But I decided my bald head was my flag, my sign that I was a fighter, and I didn’t care what others thought. In a diary entry on December 17, 2018, I wrote: “People are so fake. They just want to be close to me so that they can get looked at too. I hate cancer! I hate cancer even more when it makes my counts low. Today I went to the hospital and I couldn’t get chemo because my neutrophils were low, but then a few Chaiyanu volunteers took me out for ice cream and did karaoke with me and it made me feel so much better.”

I am so grateful to Chaiyanu for making things so much easier, especially when I couldn’t go out with friends because my immune system was low. Chaiyanu also has an amazing Chanukah campaign every year, and they let every sick kid pick a Chanukah present. Even more amazing was that they gave my siblings presents. When I was sick my siblings didn’t get much attention, it was hard for them not getting anything when I was getting presents all the time, and Chaiyanu showed them they were cared for too.


Chaiyanu gave me so much, and I wanted to pass on the goodness I got. When I would go to the hospital to get chemo I would bring along a bag filled with prizes. I would hang that bag on my IV pole and walk around the ward giving presents to other sick children. Chaiyanu inspired me to give, and giving made me happy. Through giving and happiness I was able to fight through the pain. I was able to overcome the cancer that was trying to destroy me. I’m thankful for where I am today, now 3 years after my diagnosis, in my first year of nursing school, so I too can give back and spread the happiness that was given to me.

By Atara Gherman
Kindly contribute to Chaiyanu https://bit.ly/3Hc7Wbk
You will change lives.

Seeking recommendation for a Coach

Over 1,100 Chanukah Videos including 30 favorites from the past