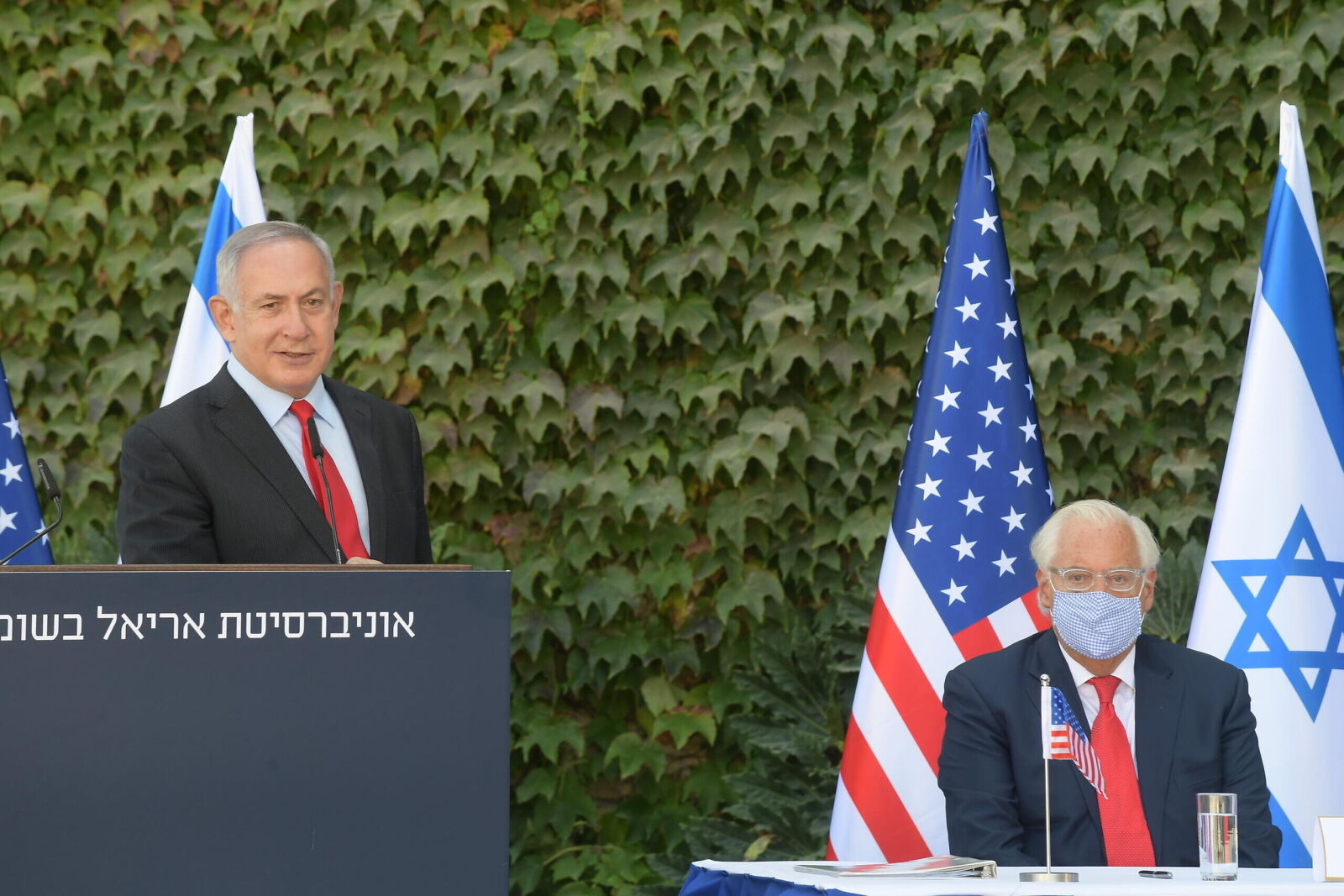 Israeli Prime Minister Benjamin Netanyahu called the signing “an important victory against all those who seek to delegitimize everything Israeli beyond the 1967 lines.”

Less than one week before Americans will decide whether to entrust President Donald Trump with another four years in office, the current administration completed its reversal of a legacy U.S. policy prejudiced against Israeli settlements.

The United States and Israel signed new bilateral agreements on Wednesday that further enhance the cooperation between the close allies in the areas of science, industrial research and agricultural.

Yet perhaps more noteworthy is that legacy “geographic restrictions” have now been removed from existing agreements.

U.S. Ambassador to Israel David Friedman noted at the ceremony that the two nations were to “sign a revision that will eliminate the geographic restriction that prohibits the funding of American and Israeli joint research and development and cooperation over the Green Line.”

In formally eliminating the geographic restrictions, Friedman said, “We are righting an old wrong. And strengthening yet again the unbreakable bond between our two countries.”

Friedman said that moving forward, the bilateral foundations will continue to “invest funds based upon the quality of the technology, and the aptitude and character of the scientists, and the capacity of the invention to improve lives. We just won’t be making decisions based upon the inventor’s postal code.

“We are depoliticizing a process that should never have been political in the first place,” he stated.

By removing the geographic restrictions, the Trump administration has also reversed from the policies of former President Barack Obama and former Vice President Joe Biden.

Back in December 2016, less than one month before Obama would exit the White House, the administration delivered Israel a harsh diplomatic blow at the United Nations. By abstaining, rather than vetoing U.N. Resolution 2334, the administration permitted the passage of a resolution that equated Israeli suburban housing to continued Palestinian terrorism.

The resolution, which referred to Israel as “the occupying Power” expressed “grave concern” regarding Jewish presence in Judea and Samaria, and “reaffirm[ed] that the establishment by Israel of settlements in the Palestinian territory occupied since 1967, including East Jerusalem, has no legal validity and constitutes a flagrant violation under international law and a major obstacle to the achievement of the two-State solution and a just, lasting and comprehensive peace.”

The resolution concluded with “calls upon all States … to distinguish, in their relevant dealings, between the territory of the State of Israel and the territories occupied since 1967.”

The resolution effectively encouraged the discrimination, labeling and boycotting of products and initiatives launched by Jews, solely on their place of origin or residence, in the biblical provinces of Judea and Samaria.

Back in 2010, Biden ripped into Netanyahu over the Israeli government’s approval of new housing units in a large Jewish residential neighborhood in the northern section of Jerusalem.

“I condemn the decision by the government of Israel to advance planning for new housing units,” he said.

The condemnation occurred amid a 10-month settlement-building freeze Netanyahu undertook following pressure from the Obama administration.

To be fair, these policies did not start with the Obama administration. A 1978 memo by State Department legal adviser Herbert Hansell, advanced during the Carter administration, offered the opinion that Israel was “a belligerent occupier” of the historically Jewish territories it liberated from attacking enemies in the Six-Day War of June 1967. The Hansell Memo concluded that “the establishment of the civilian settlements in those territories was inconsistent with international law.”

In November of this past year, Secretary of State Mike Pompeo officially reversed the Hansell Memo, charting a new course for American policy towards Israel. In March of last year, the United States also formally recognized Israel’s sovereignty in the Golan Heights, which were officially annexed into the Jewish state in 1981.

At a signing ceremony on Wednesday at Ariel University, deep in the heart of Samaria, U.S. Ambassador to Israel David Friedman reiterated that “under the Trump administration and what has come to be known as the Pompeo doctrine, we no longer view Jewish communities in Judea and Samaria as per se inconsistent with international law.”

The signing comes a month after the signings of the multilateral Abraham Accords. In the past several weeks, the United Arab Emirates, Bahrain and Sudan have each pledged to normalize diplomatic and commercial relations with the State of Israel. Trump has recently stated as many as 10 additional countries may normalize relations in the weeks and months ahead.

These Muslim majority nations are lining up to reverse their policies of boycotting the Jewish state, despite the presence of more than 400,000 Jewish residents in 120-plus built-up settlements in Judea and Samaria.

The Abraham Accords follow the rollout of the Trump administration’s “Peace to Prosperity” plan to end the Israeli-Palestinian conflict. The vision recognizes that peace can be in incentivized through meaningful investments and acknowledges that Israel will not move even one Jewish resident or evacuate a single settlement or outpost in any negotiated final-status agreement.

At the signing ceremony, Friedman stated that “in the spirit of the Abraham Accords, we place great value on academic and cultural, commercial and diplomatic engagement as the best path to peace, whether between Israel and its neighboring states or between Israel and the Palestinians.”

The site of the signing ceremony was more than symbolic. Ariel University is the premier academic institution in Judea and Samaria with a recently launched medical school.

The school’s transition from a college to a university, and then the opening of the medical school, were both met with fierce opposition from those who oppose Israeli presence in the disputed territories, including by left-wing Israeli academics and cultural elites.

A group of Israeli performers even refused to perform, boycotting a cultural center built in Ariel back in 2010.

Boycotts were promoted by the Palestinian Campaign for the Academic & Cultural Boycott of Israel (PACBI)—a movement that not surprisingly, has significant ties to known terror organizations.

At the ceremony, Israeli Prime Minister Benjamin Netanyahu called the signing “an important victory against all those who seek to delegitimize everything Israeli beyond the 1967 lines.”

He then directly addressed those who have pushed for various boycotts of Israel and settlements:

“To those malevolent boycotters, I have a simple message today: You are wrong and you will fail. You are wrong because you deny what cannot be denied, the millennial connection between the people of Israel and the Land of Israel—it’s over 3,000 years old. And you will fail because we are resolved to continue to build our life in our ancestral homeland and to never be uprooted from here again.”

Netanyahu lauded the Trump administration’s efforts to recognize Israeli sovereignty in Jerusalem and the Golan Heights, and to reverse long-standing U.S. policy on Judea and Samaria.

“When the president declared that our Jewish communities in Judea and Samaria are not illegal under international law … naysayers claimed that this would destroy the chances of peace,” Netanyahu said. “But the naysayers were wrong. Dead wrong.”

Speaking directly to the success of Ariel University in the face of the concerted boycott efforts, Netanyahu stated that “Ariel University’s academic excellence, its pioneering research, its multidisciplinary curriculum, its 450 senior faculty and 16,000 students—by the way, many of them Arabs—this is, together, an amazing success story and a wonderful testament for peaceful coexistence and reconciliation.”

Now, the bilateral agreements have the capacity to further advance technological breakthroughs in critical areas.

It is the technological prowess of Israel in technological innovation, noted Netanyahu, “from cyber security to FinTech, from smart agriculture to medical devices, from biotech to renewable energy,” that makes the U.S.-Israel relationship so strong and peace with Israel so alluring for once combative nations.

“In health alone, our joint research is playing a crucial role in the fight against cancer, in combating brain diseases and in pharmaceutical development. And who knows? It may very well be collaborative U.S.-Israel research that will help humanity wipe out coronavirus,” said the prime minister.

“In signing this agreement here in Ariel, we are not only doing so for the benefits of both the people of Israel and the people of the United States, but for benefit of the entire world.”