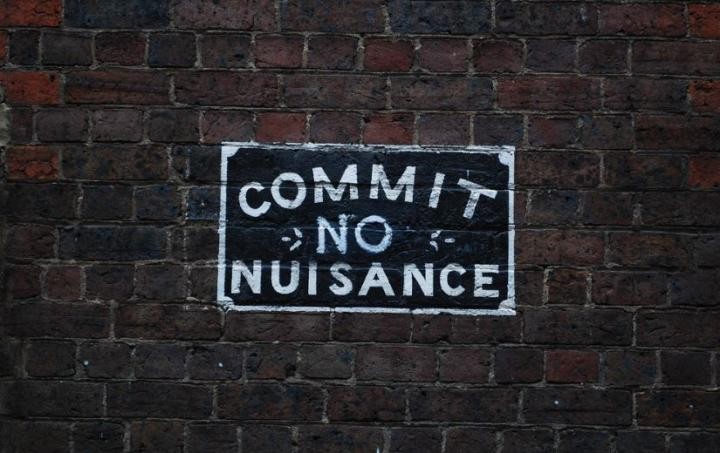 BY ADV. A. AMOS FRIED

In a more decent world, we wouldn’t need so many laws. Were society to conduct itself with a bit more polite refinement, its members wouldn’t need to resolve the plethora of disputes unremittingly submitted before the courts. In a pristine Rousseauian state of nature conflicts would rarely arise, much less require the intervention of mediating magistrates and arbiters. More likely however, in the absence of a well-functioning judicial system our lot would be unbearably brutal. Statutes and judges are necessary correctives to the human condition.

Accordingly, when people cross the line between the simply inconsiderate and the blatantly offensive, a civilized society directs us to resolve such conflicts via established legal means—whereas the alternative leads to anarchy.

At the crux of this dilemma is the concept of “nuisance,” a somewhat nebulous term referring to the annoying, unpleasant or obnoxious. One man’s genteel backyard barbeque is another man’s ruckus street party. Society has yet to devise the enigmatic formula to accommodate each individual’s sensitivity threshold for loud noises, objectionable odors or similar hazards.

A legally recognized nuisance, whether committed against the public or a particular individual, is an actionable tort, that is: a civil offense for which one may sue or be sued. Historically, a nuisance was construed as “sensible personal discomfort” causing a material interference of the right to quiet enjoyment of a person’s property.

Israel’s Torts Ordinance [New Version] defines Public Nuisance as an unlawful act or omission which “endangers the life, safety, health, property or comfort of the public or obstructs the public in the exercise of a common right.” The main obstacle with initiating such a legal procedure is that only an officially authorized representative of the State, or person who has suffered monetary damage, can sue as a result of this tort.

Individual Nuisances, on the other hand, can be adjudicated independently for a wide range of circumstances. Take for example a homeowner who neglects the upkeep of his front lawn. After a while the premises become unsightly with overgrown weeds and mounting refuse. Such disarray will most likely offend the aesthetic sensibilities of both neighbors and passersby, yet will not rise to the level of an unlawful infraction (barring municipal ordinances or home association regulations). With time, however, the grounds emit noxious odors noticeable throughout the neighborhood. These adversely affected property owners will have a cause of action against their derelict neighbor under the tort of Individual Nuisance.

Section 44(a) of the above Ordinance states: “A nuisance to an individual constitutes a person conducting himself or his business or using any immovable property occupied by him in a manner which substantively interferes with the reasonable use and enjoyment of the immovable property of another, having regard to the situation and nature thereof.”

In a seminal ruling from 1976 (Ata Textile Corp. Ltd. v. Zev Shwartz), Israel’s Supreme Court addressed the perimeters of this offense, deliberating on the question of “substantial interference” at the heart of the above statute. The court found that a proper interpretation of the prohibited conduct centers around the effect of the tortfeasor’s actions as opposed to the actions themselves. “If the disturbance caused to a person is of such severity that it impairs physical comfort and fair human subsistence in accordance with the accepted and sober view of the ordinary member of society, its result is an act of injustice.”

Later court decisions emphasized how even in modern society, with its crowded cities and busy urban centers, provisions for minimum living space, minimum privacy and a minimum quality of life must be ensured. Ultimately, the courts are obliged to protect society from the type of disturbances “that lower the quality of life of a person beyond that minimum limit.”

Whereas in the case of a Public Nuisance a private citizen can take action in the courts only if he suffered pecuniary loss, the victim of an Individual Nuisance must show simply that he “suffered damage” of any kind in order to sue for compensation. Furthermore, in this latter situation the individual is also eligible for injunctive relief which oftentimes is the primary remedy granted by the courts for instances of “ongoing offenses.”

Perhaps the most common scenario of Individual Nuisance is disturbances caused by disruptive noise. A common misconception holds that to prove an unreasonable amount of sound agitation, one must refer to a sonics expert so as to demonstrate decibel levels beyond lawfully allotted degrees. But the courts in Israel have consistently ruled that such technically mechanic measures are no longer necessary. In one particularly amusing set of circumstances, whereby an opera singing instructor was sued for conducting lessons in her residential apartment, the presiding judge found that “indeed [the plaintiffs] do not have to prove ‘substantial disturbance’, but rather suffice by showing that the noise ‘interferes’ or may ‘interfere’.”

In conclusion—a properly pursued claim of nuisance can impose severe sanctions upon a recalcitrant offender; hence the importance of this effective legal cause of action cannot be overstated. Nevertheless, like all potent stratagems it must be used sagaciously, with caution and expertise.

Adv. A. Amos Fried is a licensed member of both the Israel and New York State Bar Associations and has been practicing law in Jerusalem for over 25 years, specializing in civil litigation, criminal representation and commercial law. His private law firm is located at 5 Ramban St. in Rechavia, Jerusalem, and he can be reached at 0544-931359, or [email protected]