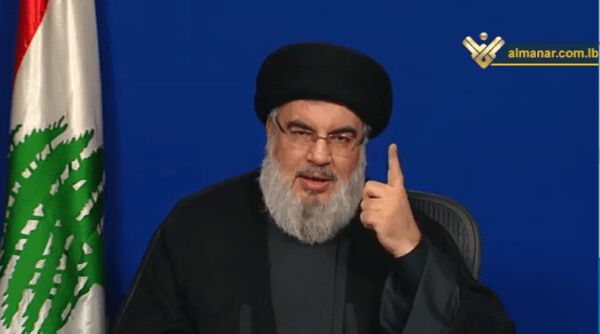 The election of “a person so arrogant, criminal, crazy and stupid” as Donald Trump exposes the shortcomings of America's democracy, says Hezbollah leader Hassan Nasrallah.

Hezbollah leader Hassan Nasrallah said on Friday that the storming of the U.S. Capitol by supporters of U.S. President Donald Trump on Jan. 6 had revealed the “true identity” of the American democracy.

In a televised speech aired on multiple channels, including Lebanon’s Palestine Today, Nasrallah said Americans have now witnessed at home a small sample of what Trump has been doing from Yemen to Venezuela, said the Hezbollah leader.

“We have been warning for a long time against the policies of this murderer. What the Americans and the world have witnessed is a small sample of what Trump has been perpetrating for four years in many countries—in Yemen, in Iraq and in Syria, as well as his siege on Iran, Venezuela and other countries, in addition to his support for the Zionist crimes against the Palestinian people,” he added.

The Hezbollah also accused the world of “remaining silent” in the face of the assassination by the United States of Iranian Gen. Qassem Soleimani and Jamal Ja’far Muhammad Ali al-Ibrahim, the commander of the Al-Hashd Al-Sha’abi militia, in Iraq on Jan. 3, 2020, which Nasrallah called a “crime.”

“Today, the truth about his criminality has been revealed to his people. Trump is a disastrous sample of American political and military arrogance, which for a long while has been casting its hegemony over nations, plundering their resources and undermining their sovereignty.

“What has happened in recent days is an example. … See how futile and disastrous American democracy is. It lacks the necessary checks and this is how people like Trump get to power. How can elections give rise to a person so arrogant, criminal, crazy, and stupid, and let him run not only America, but the whole world, and control the fate of the world? This exposes the truth about American democracy, which they have tried to spread all over the world.”