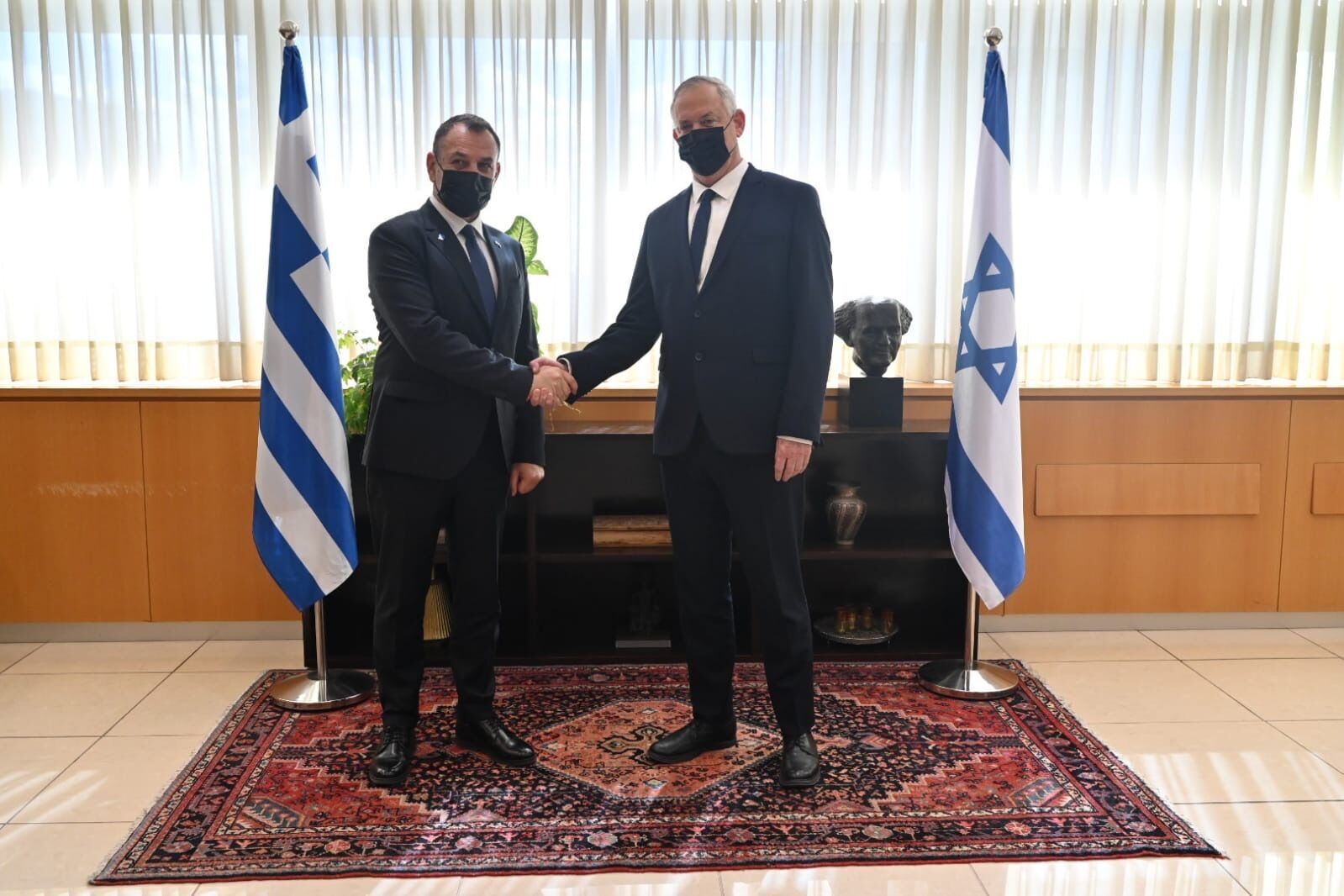 “Our cooperation in the areas of industry, force build-up and R&D contribute to the operational advantage and safety of both our countries,” said Israeli Defense Minister Benny Gantz.

In a joint press conference ahead of the meeting the two defense ministers highlighted the “values-based strategic alliance” between Jerusalem and Athens.

As a NATO member, said Gantz, Greece plays a significant role in maintaining security and stability in the eastern Mediterranean and beyond.

“Our cooperation in the areas of industry, force build-up and R&D contributes to the operational advantage and safety of both our countries,” he said. “This relationship is an asset, and I am committed to further deepening and expanding our cooperation, in any scenario and regional developments.”

Panagiotopoulous said that the two countries’ common goal was to “expand and deepen” the defense cooperation between them, which he noted had “reached in recent years a level, let me say, of unprecedented development, which can be measured in very tangible terms.”

The defense ties between Greece and Israel had been strengthened by a series of joint military training exercises in recent years, he said.

“We are determined to maintain this ever-increasing momentum,” he added, “by also enriching an already substantial defense-industrial cooperation, to the mutual benefit of our countries, with new activities and important projects, such as the international flight center in Kalamata, among other projects.”

In April, the two countries signed a defense cooperation agreement worth some $1.6 billion, for the establishment by Israel’s Elbit Systems of a flight-training center for the Hellenic Air Force.

From the strengthening Israel-Greece relationship, the Israeli defense minister turned to address the Iranian threat and the negotiations in Vienna over a potential return to the 2015 Joint Comprehensive Plan of Action nuclear agreement.

“This is a time of great opportunities, but also of great challenges,” said Gantz. On the one hand, he said, there was “great potential to expand cooperation with old and new friends in the region.” On the other, there was the Iranian threat “that seeks to destroy the bridges that are being built—a force that feeds on chaos.”

Alluding to the talks in Vienna, Gantz said, “During these critical weeks, Iran continues its pursuit of nuclear capabilities. And while Iranian officials deliver educated remarks in nice suits in Vienna, their proxies continue their aggressive attacks. Just this week we saw a massive attack on the United Arab Emirates.”

On Tuesday, Israeli Prime Minister Naftali Bennett joined other world leaders in condemning the fatal attack, which was carried out on Monday by Yemen’s Iran-backed Houthi militia.

Iran’s “double-dealing,” said Gantz on Thursday, “must be brought to the negotiat[ing] table. Any international effort must address both the nuclear issue [and] Iranian aggression. Israel and its partners, with the U.S. at the forefront, will continue to defend itself and support peace and stability in the region. Against this backdrop, [Israel and Greece] will exchange perspectives on strategic issues.”