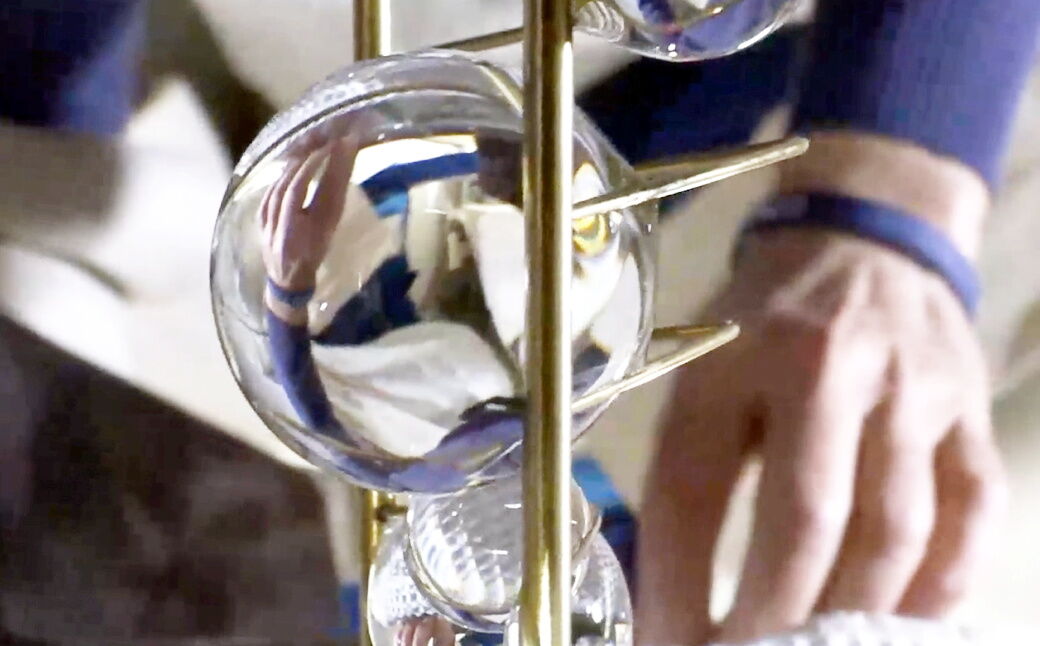 Israeli pair blend art and and science in orbit… with unexpected consequences.

It was a moment of high emotion for Liat Segal and Yasmine Meroz when they finally saw their artwork go “live” in space.

They designed and built their Impossible Object – a miniature ladder fashioned from brass rods and tubes – last October after winning approval from NASA through the Israel-based Rakia Art Project.

On Earth, water piped through their sculpture simply dribbled out through a series of holes. The expectation was that it in zero gravity it would cling, impossibly, to the outside of the ladder, as a water sculpture.

Impossible Object blasted off aboard the privately-funded Axiom Mission 1 to the International Space Station in April.

After several days of anxiety – would it actually happen or not – Eytan Stibbe, Israel’s second man in space, turned on the tap.

But it was only several months later that Segal, a contemporary artist, and Meroz, a physicist at Tel Aviv University, would finally get to see video of “the moment”.

Their object was impossible, but not quite in the way they’d expected. Instead of clinging to the brass surface, the water formed itself into large, beautiful and perfect spheres that acted as lenses, reflecting their surroundings.

Something of a surprise, but a unique and very welcome surprise, 420km above the Earth’s surface.

“It was emotionally exciting, just to think that something that we created had materialized in space,” says Segal.

“We’re both space geeks, so it really was a dream come true. To be honest I don’t think there could have been any result that wouldn’t have been a success. It was amazing.”

Meroz says it nearly didn’t happen at all. Everything in space is tightly controlled. After last-minute doubts over whether there’d be enough time, Stibbe finally activated the artwork. Video of that first activation was censored by NASA. Thankfully he did it a second time, and that version got the OK.

“I was sitting in a coffee shop somewhere,” says Meroz. “And then I got the email with the video and I opened it and I had tears in my eyes, I was really, really emotional about it, I just couldn’t believe it actually happened.

“The adhesion forces were different from what we expected, or let’s say the water tension was much stronger than we thought. And so we in the end, we got these nice crystal balls.”

The challenge had been to predict how the water would behave in the absence of gravity. They could only guess the impact of surface tension and adhesion forces, the other two factors in play.

Segal and Meroz first met during their MSc studies at Tel Aviv University. Meroz became an academic, researching computational processes in plants. Segal, who has a background in computer science and biology, diversified into fine art.

But they shared a passion for the place where art meets science, and had already collaborated on a work called Tropism, in which they had giant plant stalks respond to external stimuli.

When they were approached by the Rakia Art Project offering them the chance to send art into space as part of innovative microgravity exhibition, they jumped at it.

They were among a dozen or so projects that were approved, including a sculpture of radio waves broadcast from Earth to the ISS and a space ring, with metal follicles that rise and float gently on the finger.

But only their project had such an element of unpredictability. They thought the water would cling to the ladder, and it didn’t.

They’d been working under tight constraints at Segal’s studio. Once they got the go-ahead, they had just 10 days to create their Impossible Art from start to finish. And given the high price of space cargo – $1 million per kg – they had a strict 250g limit. They weighed in at 249.85g.

“There are restrictions concerning dimensions, weight and the materials themselves,” says Meroz. “So we had to give a list of all the materials that were included and it all had to pass through some NASA committee to check everything was OK for the flight.”

At some point in the future there will be an exhibition, here on Earth, of the projects that went into space, including the Impossible Object.

“We have a few ideas,” says Segal. “One is to show it in its failure, to show how it cannot exist on Earth, to have the water running through it, and falling to the ground.”

As space becomes – relatively – more accessible, there are likely to be more art opportunities.

“Suddenly space is not open only to NASA or scientists, now it’s open to everybody,” says Meroz. “So what does it mean to be a human in space and not a scientist in space?

“People lived in caves, surviving, but they still found the time to draw pictures. That’s what we do as humans.”

That’s why she says they wanted to create a sculpture that contrasted so starkly with its hi-tech display space, inside the International Space Station.

Caption: The Impossible Object, a miniature ladder fashioned from brass rods and tubes. In space, the water forms spheres and creates artwork that would be impossible to achieve on Earth.
Credit: Courtesy.