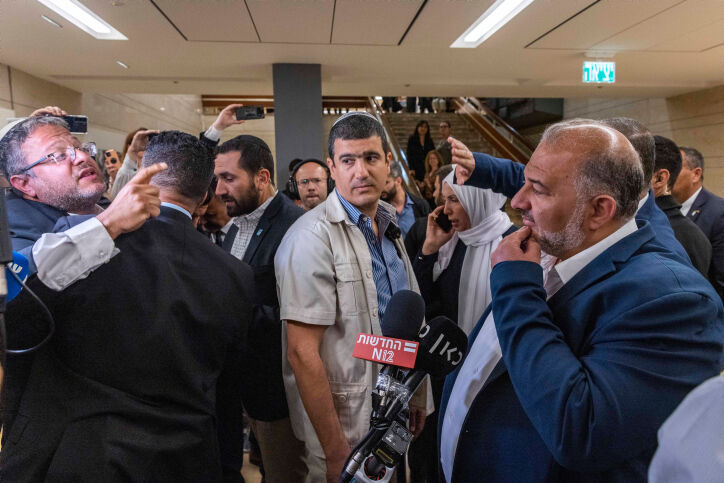 Israeli Prime Minister Naftali Bennett’s embattled government lived to fight another day on Wednesday, as the Likud Party withdrew its bill to dissolve the Knesset. The move followed the declaration by the Islamist Ra’am Party, which had temporarily frozen its membership in the coalition over recent tensions over the Temple Mount in Jerusalem, that it would give the government another chance.

Together with Ra’am’s four Knesset seats, the coalition can match the opposition’s 60 seats, and had the bill not passed the Likud would have been unable to bring a similar bill to a vote for six months.

Ra’am’s announcement followed a tempestuous Knesset session, exacerbated by the death of an Al-Jazeera journalist during an Israeli raid in Jenin earlier in the day.

Speaking from the Knesset podium on Wednesday, opposition leader Benjamin Netanyahu harshly criticized the coalition, saying a government supported by the Muslim Brotherhood could not protect Israeli citizens and soldiers.

“I want to give my full backing to the IDF soldiers and their officers, both in their fight against terrorism and against the dishonest Palestinian propaganda campaign,” said Netanyahu.

“The libelous lies against our soldiers, the defamation from within the coalition government, proves once again that those who are dependent on terror supporters cannot fight against terrorism. A government dependent on the [Islamic] Shura Council of the Muslim Brotherhood cannot defend our citizens and protect our soldiers,” he added.

Speaking to reporters in Jerusalem, Ra’am Party head Mansour Abbas castigated Netanyahu for “continuing with his lies and incitement,” pointing out that the former prime minister had also negotiated with him in an attempt to form a coalition after the previous election.

“It would be a grave mistake to undo everything that we have accomplished thus far,” he added.

Caption: MK Itamar Ben-Gvir reacts during a press statement of Ra'am Party head Mansour Abbas at the Knesset on May 11, 2022.
Photo by Olivier Fitoussi/Flash90.