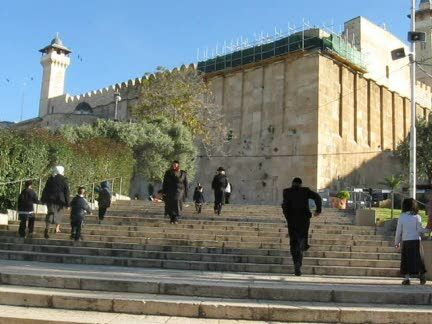 Yair Maimon has been hailed as an Israeli hero for eliminating a would-be terrorist attempting to sneak into the Jewish town of Tekoa on Sunday. Maimon spotted the assailant on the fence while he drank tea with his wife on their porch.

Israel is in the midst of a massive terror wave during which Palestinians have murdered innocent civilians with axes, guns, and knives.

On Tuesday, Israeli news site Bchadrei Charedim published a remarkable article about Maimon’s mother. According to the report, which was based on statements from Maimon’s brother Avraham, she experienced an inexplicable urge to rush from her home in Kiryat Arba to the Cave of Machpela in nearby Hebron.

This Jewish holy site attracts droves of worshipers each year, who pray there at the graves of the patriarchs and matriarchs of the Jewish people.

According to Avraham, during the moments in which their mother prayed at the Cave of Machpela, Yair and his wife went outside for a cup of tea, which is where they spotted the armed intruder on the security fence.

“She felt that something big was about to happen,” Avraham told Bchadrei Charedim.

“When I called my mother to tell her about the incident, she replied, ‘I know something happened. Just tell me everyone’s fine,'” Avraham added.