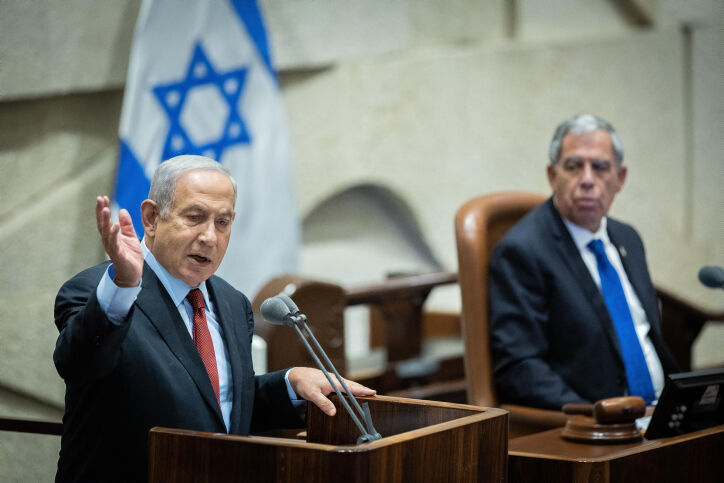 The motions, introduced by the Likud and Shas, were voted down by 61-52 and 56-52, respectively • Bennett is reportedly looking to replace the Islamist Ra’am Party with United Torah Judaism.

Israel’s coalition government overcame two no-confidence motions at the opening of its summer session on Monday, one introduced by the Likud Party and the other by Shas.

Five members of the Joint Arab List Party voted with the coalition against the Likud motion, but abstained from the second vote. The coalition lost its 61-seat majority when Yamina MK Idit Silman resigned in April, and coalition partner Ra’am has temporarily frozen its membership in the government over recent tensions on the Temple Mount in Jerusalem.

Acting coalition chairman MK Boaz Toporovsky (Yesh Atid) told Israel Hayom that “every collaboration with every party, from the Joint Arab list to the Haredim [United Torah Judaism] and the Religious Zionism Party, is kosher. Anything for the continued improvement of Israeli citizens’ lives.”

He called for more coalition members to defect, saying, “The question is, what do they prefer: hatred of Netanyahu and being dependent on the Shura Council [a consultative body that elects Hamas’s Politburo], or the good of the state?”

While the tottering coalition survived the motions on Monday, a greater challenge looms on Wednesday, when the Knesset is to vote on whether or not to dissolve the government.

It remains unclear whether Ra’am will abstain in accordance with its announced freeze or vote with the coalition out of concern the move could pass a first reading in the Knesset.

In an interview with Arabic-language Al-Shams Radio 0n Monday, Joint Arab List MK Ahmad Tibi said his party would vote in favor of dissolution. Without the support of either Ra’am or the Joint Arab List, the coalition would not have majority support.

Hectic talks are reportedly underway between officials at the Prime Minister’s Office and senior members of United Torah Judaism for the party to replace Ra’am in the coalition. The Haredi party has denied the report and even issued a joint statement with Shas saying it would work to replace, and not join, the coalition.

According to Yesh Atid, the coalition was set to commence efforts toward passing legislation for the Haredi lawmakers Tuesday.

UTJ MK Moshe Gafni has attacked Netanyahu in recent weeks and called for the Likud to replace him as party leader to allow for the establishment of a right-wing government. At the same time, talks commenced on potential cooperation between senior UTJ figures and coalition officials, and the PMO. These talks were conducted by Defense Minister Benny Gantz and Interior Minister Ayelet Shaked, among others.

Ahead of the Knesset’s return from the summer recess, intensive talks were held on the coalition’s continued activity in the absence of a Knesset majority. In these talks, the possibility of either replacing Ra’am or at least growing the coalition by a couple of lawmakers to neutralize Ra’am’s role in the government was discussed.

The assessment in Yamina is that if UTJ replaces Ra’am, MK Silman, who ostensibly quit over the coalition’s lack of support for Jewish values, would return. (Several other coalition members are also uncomfortable sitting in a coalition with the Islamist Ra’am Party given the current security situation.)

While Gafni is supposedly very much in favor of the move, some members of UTJ, and MKs Yitzhak Pundrus and Shirly Pinto in particular, are opposed. Shas is also opposed to ending its alliance with Netanyahu and is responsible for a joint statement from both the Haredi parties saying, “The current government does not have the public’s trust, and without a majority in the Knesset repeatedly harms the Haredi and traditional public. We will continue to do everything we can to replace it with a nationalist government that will provide security to Israel’s citizens and represents Jewish tradition and the weaker classes with dignity.”

While UTJ does not have a problem joining a coalition with Yesh Atid, Yamina, New Hope and Labor, Yisrael Beiteinu chairman Avigdor Lieberman, who has been an outspoken critic of the Haredi sector, does pose an obstacle to the move.

The Joint Arab List, meanwhile, made its position clear in an Arabic-language statement on Monday:

“Our vote today is on the no-confidence motion in the current government and not the bill to dissolve the Knesset. In a no-confidence motion, Netanyahu will be crowned and will return to the premiership, and we as the Joint Arab List will not support any step that restores Netanyahu to power, and are acting only in the interest of Arab society, to obtain its rights with dignity.

“We are against Netanyahu’s approach, and we will not support any no-confidence motion submitted by the Likud, and we will not in any way be a lifeline for Netanyahu and his party. Our position on Netanyahu and his racist policies is clear, and it is not an alternative to this government. We prevented Netanyahu from returning to power, and in return, we will not support the Bennett government in any vote against Arab society and our Palestinian nation, or with the Ra’am party, which made one concession after another against our people and is now on the fringes of influence in the political arena despite all the concessions it made, which confirms the correctness of the Joint Arab List’s approach.”

Ra’am member Walid Taha retorted: “Lies, fraud and hypocrisy, and the fig leaf that fell on the faces of patriots! The current government, according to the description of the ‘six guardians of patriotism’ in the Joint Arab List, has been the bloodiest in Israel’s history … and it has murdered Palestinians, and it has done nothing for them and for the good of Arab society!’ And after all this, the six members of the Joint Arab List vote with the coalition in a no-confidence motion we abstained from!