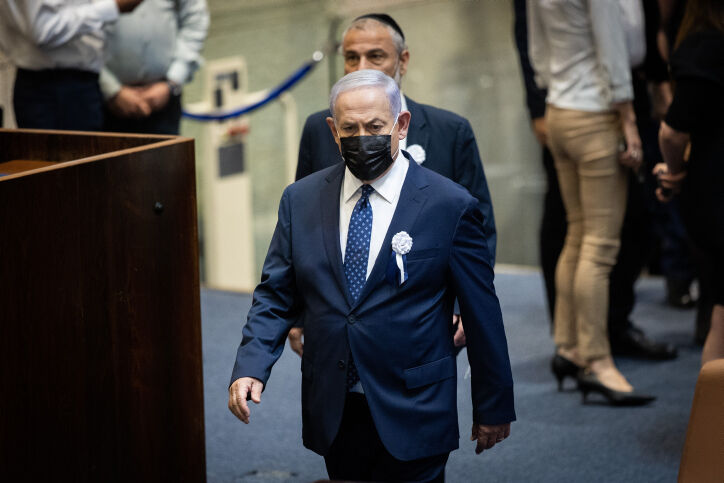 Netanyahu’s shameless cynicism on the citizenship law vote shows that both Israel’s opposition and the government are undermining their ability to be taken seriously about security threats.

Like so much of what happens in the Knesset, the aftermath of a recent vote on a law that would prevent a possible flood of Palestinian immigrants into Israel was not a very edifying spectacle. The 59-59 tie meant the failure of the effort sponsored by Israel’s new government. That generated an impromptu celebration on the part of some of its harshest critics—the members representing the Joint List, a coalition of radical Arab parties. But nearby, the joyous outburst from the Arab Knesset members exhibited equally demonstrative allies in that early morning standoff.

What were Bibi and hard-core Likudniks, along with their even more extreme right-wing allies of the Religious Zionist Party, doing cheering the defeat of a measure that in a more rational world they would have supported? The answer is partisan politics.

While most Americans who care about Israel aren’t paying that much attention to the nonsense going on in the Knesset, this incident shouldn’t be treated as unimportant or just a case of boys being boys in the rough and tumble of Israeli politics. On the contrary. Netanyahu is not only tarnishing his brand as Israel’s security expert by acting in this manner but is helping frame a narrative in which Americans won’t be as inclined to take his—and those of others on the right—warnings about even more grave threats to the country’s defense and identity at a time when their credibility will be even more important.

Netanyahu and his followers share the concerns of those who sponsored the bill, which prevents Palestinian Arabs from gaining Israeli citizenship by marrying an Israeli. The law, which was first passed in 2003, has been subject to an annual renewal vote. Every year prior to this, the Likud supported it. Indeed, in the past, its members damned anyone who opposed it as insufficiently concerned with the Jewish state’s security, if not altogether soft on terror. But not this year.

The reason was painfully obvious. Having found himself on the opposition benches for the first time in 12 years, Netanyahu is desperate to topple the government that came into existence a few weeks ago so as to ensure his ouster.

As the old cliché goes, politics makes strange bedfellows. In this case, the Likud and the Joint List have a common goal, and Netanyahu, who is easily among the most masterful and deeply cynical practitioners of the political dark arts, had no hesitancy in making common cause with them even if their views about the issue were polar opposites. If stopping a law from being renewed that he previously regarded as essential would embarrass Bennett and the coalition, then he clearly thinks that all’s fair in love and war.

It’s true that the Bennett-led coalition had to make some compromises of its own on the issue. In order to get some of its left-wing and Arab members to vote in favor of it, the renewal was limited to six months as opposed to a year. And the number of Palestinians already living in Israel who were allowed to be treated as special cases increased.

But Netanyahu’s decision to let a law that would otherwise be considered vital expire in order to make his former supporter look bad took political gamesmanship to a new level. That’s especially true considering that security experts reportedly briefed the Likud faction beforehand and implored them not to use this issue to play politics.

Netanyahu justified this stunt by saying that it exposed the Bennett-Lapid government’s inherent instability and its reliance on Arabs. This is rich coming from him.

Bennett could never have cobbled together his bare majority had Netanyahu not broken with precedent and negotiated with Mansour Abbas and his Islamist Ra’am Party in order to allow him to stay in power. Netanyahu’s rightist allies vetoed that deal, even though Bennett would have gone along with it. But now that Bennett has done exactly what Netanyahu wanted to do, the former prime minister’s barbs about the government being dependent on “anti-Zionist elements” rings particularly false.

Does any of this truly matter in the long run?

Despite the anger and embarrassment that Netanyahu created for Bennett and his colleagues, the vote on the citizenship law was not a fatal blow to the government. While any coalition made up of elements from the center, left and right is inherently unstable and subject to daily controversies, there is no sign that any of its components are wavering in their commitment to keeping it afloat. To the contrary, the vote was a reminder of why they came together in the first place: their shared antipathy for a prime minister who felt loyalty to no one or to any idea in the course of 12 consecutive years in power.

The real problem, however, goes deeper than disgust for this sort of unprincipled gutter partisanship.

While the question of Palestinian citizenship may not present an existential threat to Israel, Netanyahu’s gamesmanship on it should worry those who understand that in the coming years, Israel needs to carefully guard its credibility on security issues.

At some point this year, Israelis will have to marshal its arguments to counter the Biden administration’s efforts to justify its re-entry into the weak and dangerous nuclear deal with Iran. It will also have to counter any moves from Washington towards the Palestinians such as the opening of a consulate in Jerusalem that will, in contrast to the situation created by former President Donald Trump’s recognition of Israel’s capital and moving of the U.S. embassy there, encourage Palestinian ambitions for a repartition of the city.

To all appearances, rather than joining forces with the government to counter these urgent threats, Netanyahu appears likely to use them primarily for partisan purposes in order to discredit Bennett.

While one should never underestimate Netanyahu’s political acumen or the inherent weakness of the Bennett-Lapid coalition, it looks as if the former prime minister is also underestimating the damage to himself and the country from the games he’s playing.

The Likud base may rationalize and blindly follow him no matter what he does. But the rumblings of discontent from inside the Likud Knesset caucus about Netanyahu’s recent incompetent leadership are growing louder. They know that had he mustered the courage to step down and let someone else lead the party instead of hanging on at all costs, Israel would currently be governed by a right-wing government with a powerful majority, rather than the current power-sharing scheme Bennett and Lapid have worked out.

He doesn’t seem to realize that by playing fast and loose with security issues, he’s damaging his brand, both at home and abroad. More importantly, treating anything involving national security with this kind of cavalier partisanship lends credibility to those forces inside the Biden administration and the Democratic Party who have never accepted the legitimacy of any Israeli security arguments.

Not only will these tactics likely fail to gain the Likud the strategic advantage it seeks over Bennett, but will come back to haunt Israel the next time it approaches Washington demanding that it take their security concerns seriously. Israelis and friends of Israel are going to have to put aside their differences and work together to deal with the threats that Washington’s bad policies may produce. There are some things that ought to be considered to be above politics. Unfortunately, Netanyahu makes no distinction between Israel’s needs and his own. It’s time for his followers to make it clear to him that while they’ll back his play when it comes to partisan infighting, he’s going to have to regard security issues as out of bounds for further shenanigans. If not, he may discover that his stay in the opposition may be far longer than he ever imagined.