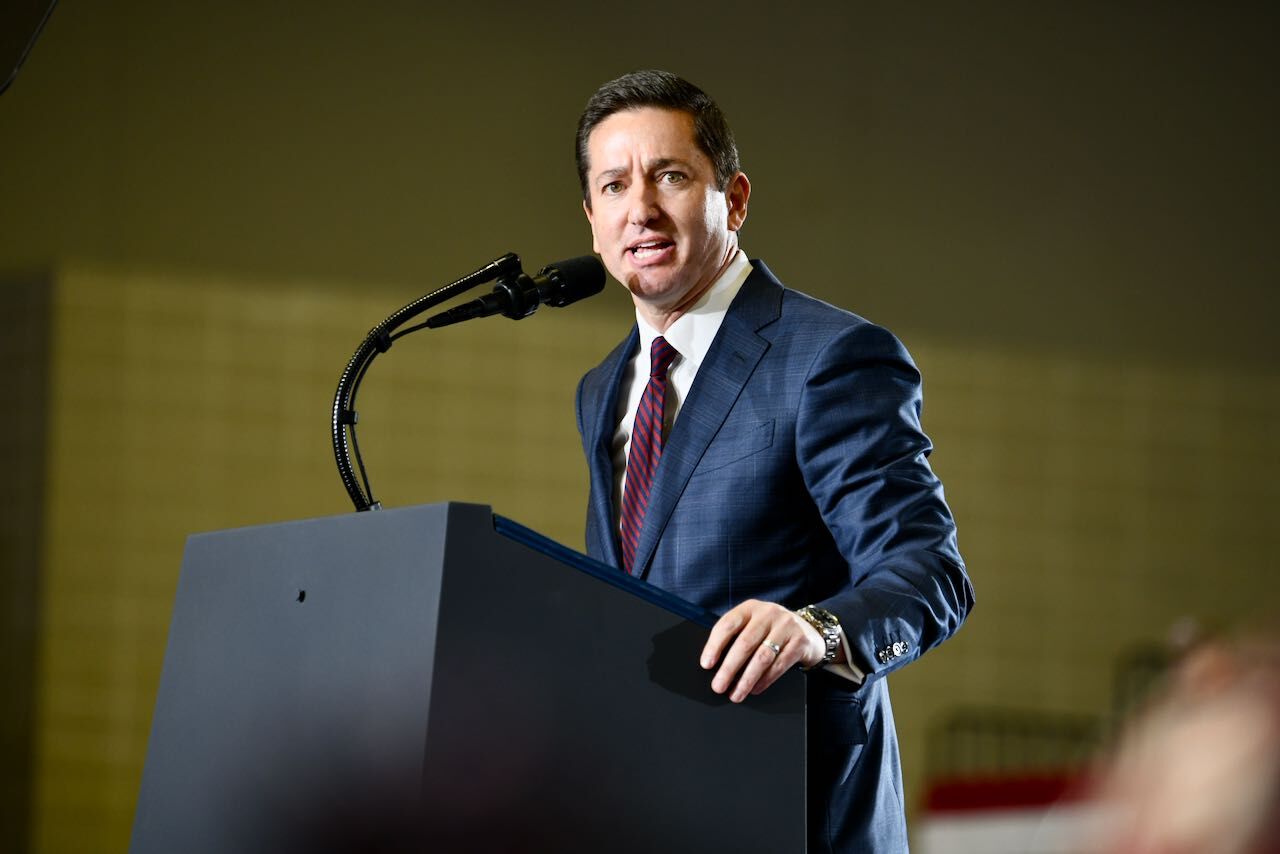 Richter, 54, and his wife, Michelle, have four daughters.

JNS talked with Richter by phone on Oct. 23. The interview has been edited for brevity and clarity.

Q: What makes you different than Congressman Kim in general and in terms of issues pertinent to the Jewish and pro-Israel community?

A: First of all, this is the first time I’m running for office. I’m an attorney and engineer by training, and I helped build from, basically, a near-bankrupt company with 300 employees into a publicly traded company with 4,300 employees. When I say I’m going to do something I get it done. And we’ve got Congressman Kim, who unfortunately talks a lot and says the right things, but hasn’t accomplished anything in the last two years.

I’m Jewish and I’m very proud of my Jewish heritage, and I’ve always been a lifelong supporter of Israel. Congressman Kim, even though he ran off his foreign-policy experience, doesn’t have a very strong record on that. He was the Iraq adviser to President [Barack] Obama at the exact moment that ISIS rose and became a major power in the Middle East, and we know President Obama has said that ISIS caught him off-guard … and they didn’t take them seriously, and after the fact, his intelligence team dropped the ball. Who was that intelligence team? That was Andy Kim.

Q: You mentioned your Jewish identity. How does it play a role in your life and your run for Congress?

A: Religion is a very personal thing. I’m a very strong believer in the separation of church and state. I haven’t talked about my personal religious beliefs on the campaign trail. I’m not sure politicians should.

Q: How can the United States have a separation of church and state while still protecting religious freedom?

A: You have to. That’s what you must have in order to protect religious freedom. I’ve heard calls throughout my lifetime that this is a Christian nation. It’s not. It’s a secular nation. There’s a variety of religions in this country. People have the freedom to practice their own religion.

Certainly, Israel is a very different example. In the United States, you have to have a complete separation of church and state not just because it’s in the Constitution, but because we have a very diverse society of a multitude of religions.

A: It was terrific and very helpful to the campaign. I’m on the leadership council of the Republican Jewish Coalition, and I’ve been very supportive of them for quite a while. It was very heartening to see them support me in return. Their support for the campaign has been crucial. They came in and helped raise quite an amount of money earlier in the campaign, and they spent a lot of money on ads over the course of the campaign in August and September.

A: I’ve never been to Israel, but I’m really excited about going. I understand there’s a trip every two years for members of Congress, and I’m looking forward to it. I’ll bring my entire family with me.

Q: Is the president doing enough to confront the Iranian threat?

A: His reversing the Joint Comprehensive Plan of Action was a very important start. I was not in favor of the Iran nuclear deal. It was a disaster for the United States. It was a disaster for Israel. The president has taken important steps in placing sanctions against Iran to hold their feet to the fire. The fact that we gave billions and billions of dollars to the largest state sponsor of terrorism in the world for a deal that had a 15-year time limit on it and Iran was simply just going to take the benefits of the deal. We had the expiration deal, and they’d go back to where they were.

Q: What was your reaction to the Abraham Accords?

A: I was very happy to see that. That’s a major step for peace throughout the Middle East for the security of Israel long term. I’ve been to the UAE. I’ve been to Bahrain. They’re very pro-Western countries. They’re very modern. To see three agreements made to resume normal diplomatic relations, and trade and commerce Israel, and those two countries was a great thing. It’s the start of more such agreements that are going to continue to legitimize Israel in the eyes of the Arab world, and hopefully, pressure the Palestinians to the negotiating table so that we can see real long-term piece among all the players and the continued existence of Israel as a legitimate nation.

(Editor’s note: The interview was done before the Oct. 23 announcement that Sudan has agreed to normalize relations with Israel. Richter applauded the move.)

A: It’s disgraceful. Two decades into the 21st century, and unfortunately, anti-Semitism didn’t go away. It’s very disheartening to read about that, to see it. I see it much more so on the left, particularly, on college and university campuses, where the progressive wing of the Democratic Party is clearly anti-Israel and pro-BDS and it’s strange.

Progressives tend to view the world, tend to view people are either oppressors or the oppressed. They’ve taken hold of the idea that Israel is the oppressor, and that the Palestinians are the oppressed. I don’t think that’s true whatsoever. They view almost the way they viewed South Africa 40 years ago, and that’s unfortunate because that’s not the State of Israel, and that’s not the situation between the Israelis and the Palestinians. It’s disheartening to see that come up.

It’s disheartening to see it in members of the U.S. Congress in Ilhan Omar and Rashida Tlaib, and others espousing very anti-Semitic, anti-Israel views on the floor of the House. We need to continue to fight anti-Semitism at every turn. I’m looking forward to doing what I can in Congress to make that happen, to support Israel, to oppose the BDS movement and to hopefully stop violence from both extremes in the United States.

Q: How is anti-Semitism and anti-Zionism best combated, especially the BDS movement?

A: There’s the expression that sunlight is the best disinfectant, and I think by highlighting the issue, by talking about it, by making sure that when it happens it becomes publicly known and responded to. People that hate like to live in the shadows, and we have to make sure that they can’t live in the shadows. We highlight this and make sure we educate everyone about it and do everything we can to make it stop.

Q: If elected, you would be one of a few Jewish Republicans in Congress. How can the GOP appeal to Jewish voters, considering that most of them align with the Democratic Party?

A: I think that requires evolution. President [Donald] Trump has done a great job of supporting the State of Israel. I think you’re going to see tremendous support for him from the Orthodox community, which is not liberal or Democratic and has become heavily Republican. I think you would appeal to them through the polices that you put in place. That includes support for Israel and policies against anti-Semitism. You have two parties that have very distinct philosophies right now, more so than ever before.