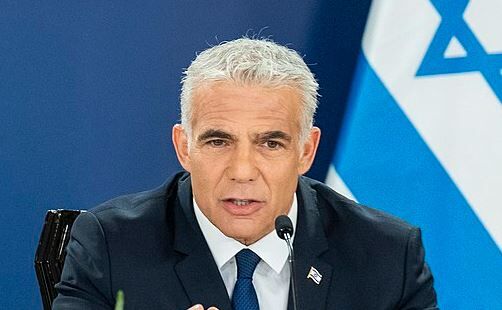 Prime Minister Yair Lapid is expected to announce his support for the establishment of a Palestinian State during his speech to the UN General Assembly on Thursday, according to a source close to the Israeli premier.

The endorsement will mark the first time an Israeli prime minister has called for the two state solution at the UN.

The source acknowledged that there was pressure from the Biden administration to public endorse the two state solution, but added that “Israeli security policy will be determined by Israel.”

“Support for the two-state solution is … best for the State of Israel. The greatest danger we face is one state,” Arutz 7 cited the source as saying.

During his address to the UNGA on Wednesday, President Joe Biden also endorsed the two state solution, saying that the Palestinians were “entitled” to their own state, and that it was the only way to ensure Israel’s security going forward.

“We will continue to advocate for a lasting, negotiated peace between the Jewish and democratic state of Israel and the Palestinian people,” Biden told the UN General Assembly.

“The United States is committed to Israel’s security. Full stop. And a negotiated two state solution remains our best way to ensure Israel’s security and prosperity for the future and give the Palestinians the state to which they are entitled,” he said.

Palestinian Authority President Mahmoud Abbas is also slated to address the GA on Thursday, and is expected to call for the UN to grant the Palestinians full-member status at the global body.

Do more in Israel with Touro College