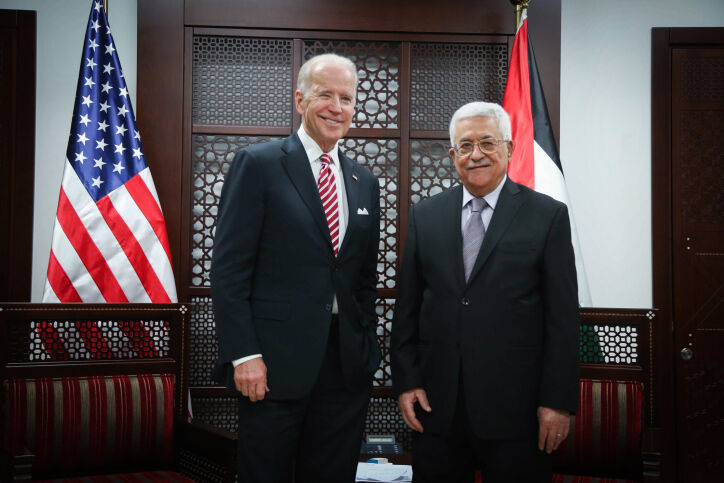 FLAME via JNS
By James Sinkinson

Washington should reject the possibility of reopening the “Palestinian embassy” without both the agreement of Israel and a demonstration of the Palestinians’ commitment to peace.

After a recent 20-nation ministerial meeting on the Afghan crisis, U.S. Secretary of State Antony Blinken warned that if the Taliban want relations with the United States, it “will have to be earned.” Blinken should apply that policy equally to the Palestinian Authority, which has not relaxed its obstinacy and disregard for U.S. interests for at least 20 years.

Nonetheless, the Biden administration seems determined to reopen the American consulate in Jerusalem, which served as a de facto embassy to the Palestinian Arabs since the mid-1990s, with no preconditions.

Perhaps more importantly, it’s unheard of—and insulting—for the United States to place an unwanted embassy or consulate for a foreign entity in the sovereign capital of another state. No surprise that Israel’s leaders have so far strenuously resisted this move—and no wonder a large number of legislators in Israel’s current (and fragile) government outright reject the U.S. consulate plan.

In March 2019, the Trump administration wisely closed the consulate and folded its operations into the new U.S. Embassy to the State of Israel in Jerusalem, which was moved from Tel Aviv in May 2018. This step, bold as it seemed, merely implemented the Jerusalem Embassy Act—passed by Congress in 1995—which declared that “Jerusalem should be recognized as the capital of the State of Israel.”

The Embassy Act also stated that the American embassy should move to Jerusalem within five years. Unfortunately, every president until 2018—despite promising to move the embassy—signed a countless string of six-month postponements. Since an announcement in December 2017 by then-President Trump, the U.S. has officially recognized Jerusalem as the official capital of the State of Israel. It has since been joined by other nations, such as the Czech Republic, Serbia, Honduras and Guatemala.

Since the United States fully recognizes Israel’s sovereignty in all of Jerusalem and was a party to agreements that prevent any Palestinian activity in Jerusalem, it’s a betrayal for the Americans to reopen an official institution in the city meant to serve Palestinian interests. It would also be an abrogation of the U.S. commitment to Israel’s absolute sovereignty in its capital city. Even a de facto consulate to the Palestinians contradicts firm U.S. commitments to Israel.

Moreover, as Blinken has made clear, diplomatic gains must be earned. If the Palestinians want something from the United States, they should have to take definitive actions in exchange. The P.A., however, continues to work against American interests, both locally—in its anti-democratic and anti-Israel policies—and regionally, for example via its flirtations with Iran and rejection of Arab peace initiatives.

On a local level, the P.A. has over the years devolved into yet another brutal Middle East dictatorship. P.A. leader Mahmoud Abbas is now more than 16 years into his five-year term as P.A. president. His penchant for cancelling elections has become notorious.

Recently, Abbas’s regime has increased its brutality. Critics are routinely threatened, arrested, imprisoned without trial and—in the case of one prominent political activist, Nizar Banat—murdered by P.A. police. The security forces beat Banat and dragged him from a house in Hebron. He was pronounced dead 20 minutes later at a hospital. Peaceful protests, demonstrations and strikes are brutally dispersed by P.A. thugs.

Israel-based education watchdog IMPACT-se has publicized inciteful material in Palestinian textbooks, such as a reading exercise glorifying the firebombing of a bus full of Jewish civilians. An Arabic language lesson describes suicide bombings in which Palestinians “wore explosive belts, thus turning their bodies into fire, burning the Zionist tank.”

In addition, the P.A. continues to pay funds to terrorists and their families in the “Pay for Slay” programs, and Palestinian media regularly honor mass-murdering terrorists.

Regionally, the P.A. is being left behind as more and more Arab states seek relations with the Jewish state. Palestinian leaders tried to prevent the signing of the American-backed Abraham Accords normalization agreements, calling them a “stab in the back” of the Palestinian people. The P.A. has threatened Arab states that seek a more peaceful, prosperous region—preferring that violence and bloodshed continue—thus acting consistently against American efforts to achieve regional stability.

In the face of the P.A. hostility to Israel and U.S. interests, why is the United States acting against its strong ally, Israel—as well as its commitments and signed agreements? Why is it attempting to appease a Palestinian leadership that is moving further from peace, that continues to terrorize Israel and its own people and act against regional stability? It makes no sense legally, politically or diplomatically.

Bottom line: The United States should reject the possibility of reopening its consulate without both the agreement of Israel and definitive actions by the Palestinians demonstrating their commitment to peace. Regardless of Biden’s lip service to Jerusalem as Israel’s capital, any U.S. effort to open a consulate serving the interests of a foreign—and openly hostile—entity would be a slap in the face to that very recognition.

If despite all the contraindications the United States wants to open a diplomatic conduit with the Palestinians, it should establish one in the Palestinian capital city of Ramallah.

James Sinkinson is president of Facts and Logic About the Middle East (FLAME), which publishes educational messages to correct lies and misperceptions about Israel and its relationship to the United States.

Report: Some prisoners at Gilboa facility were ‘aware of escape plot’ in advance

‘If you build it, they will come’: The blessings of the holiday sukkah