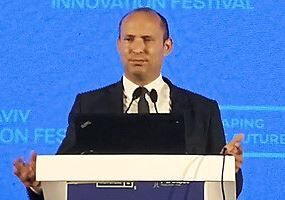 Prime Minister Naftali Bennett was listed among Time Magazine’s 100 Most Influential People in 2021.

The magazine’s blurb praising Bennett was written by Mansour Abbas, head of the Islamist Ra’am party that is part of the Israeli government coalition.

“In the end, it all comes down to courage,” Abbas wrote.

“After four elections in two years, a bold act was needed to unite a country frayed by political stalemate and brought to a desperate standstill. Something dramatic needed to change, but more importantly, someone courageous needed to make that change. Naftali Bennett threw himself into a political firestorm in order to forge previously unimaginable ties between Israel’s left and right, Arabs and Jews, religious and secular. He formed one of the most diverse governments in Israel’s history.”

Abbas quoted Bennett as telling him, before he became premier, “I don’t do things in the dark.

“In a time of polarization and hate, the Israeli public needs unity.”

The Ra’am leader said that as the leader of an Arab party, he had become used to cameras being kept outside the room.

“It wasn’t just the flash of the cameras that lit up the room at that moment, but the hope for a brighter future for us all,” he concluded.