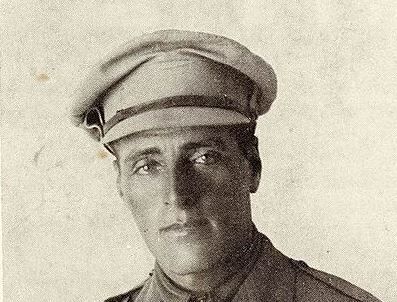 If you’ve visited Israel, odds are that at some point you were on one of the many Trumpeldor Streets in scores of towns and cities across the country.

This month marks the 100th anniversary of the death of the legendary Joseph Trumpeldor, the one-armed defender who fell along with seven others defending Jewish farming villages in northern Israel from Arab attackers.

Born in Russia in 1880, Trumpeldor served in the Russian army where the decorated soldier lost an arm in battle before eventually moving to the Land of Israel in 1912.

Following the outbreak of the First World War and his refusal to give up his Russian passport and take Ottoman citizenship, Trumpeldor was expelled from the country and joined the Allied war effort. He was instrumental in founding a Jewish brigade – a precursor to the Israel Defense Force – that fought for the Allies at Gallipoli.

After the war, the one-armed Trumpeldor eventually returned to the Upper Galilee, where he used his military experience to organize defenses against hostile Arabs.

On March 1, 1920, hundreds of Arabs from a neighboring village in southern Lebanon gathered outside of the farming community of Tel Hai in a post-WW1 area that was loosely under French control as the British mandate in Palestine had not yet been established.

The Arabs thought that the Jews were sheltering French troops in Tel Hai, and as tensions mounted, a Jewish farmer fired a shot into the air as a signal to bring reinforcements from the nearby village of Kfar Giladi. Trumpeldor arrived with 10 men. A firefight ensued in which Trumpeldor was mortally wounded, dying after being evacuated to Kfar Giladi.

Laying on his deathbed, his final words are said to have been: “Never mind, it is good to die for our country,” a phrase that represented his heroism and dedication to building a Jewish homeland.

Eight Jewish defenders – two women and six men ,including Trumpelor – fell in the defense of Tel Hai. The nearby city of Kiryat Shmona – Hebrew for ‘the town of eight’ – is named for the eight fallen defenders.

At the memorial service held on Tuesday, Prime Minister Benjamin Netanyahu praised Trumpeldor as the “lion of the Galilee.”

“Trumpeldor didn’t have to die to become a legend – he was a legend during his life,” Netanyahu said.

“His wonderful personality represented the gospel of Zionism, love of the Land of Israel, grounded stature, heroism and sacrifice, working the land and above all national honor,” Netanyahu added.

“At every stage in his short life, Trumpeldor left a mark of leadership and courage.”