May 13, 2021 | News | Arab-Israel Conflict | Opinion | National
We have no choice but to strike Hamas hard and where it hurts 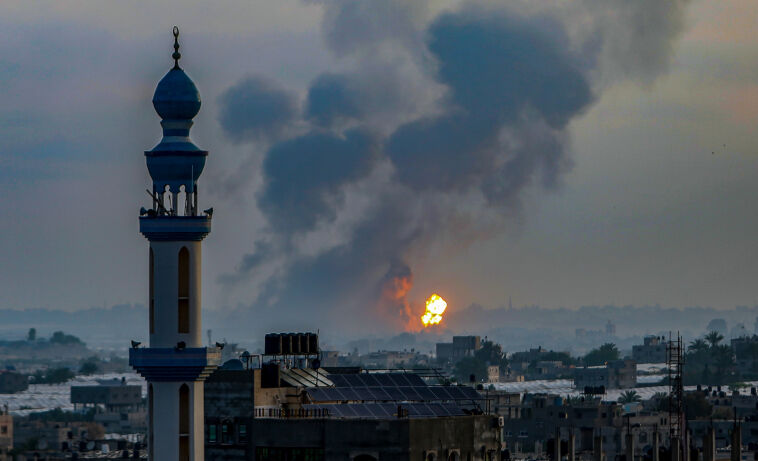 The message to the leaders of this and other terrorist organizations should be clear. As long as they terrorize our civilians, the people of Gaza and the Hamas leaders in particular will also be forced to live in fear.

Israel is at one of the most significant security and diplomatic crossroads in recent years.

We are witnessing a missile attack that reached our capital, Jerusalem, the central Tel Aviv area and, of course, the communities in the south, where the heroic residents have been dealing with this reality for years. We are also seeing a wave of violent and dangerous riots from the fringes of the Arab sector, who are attempting to challenge law and order and harm all that is dear to us as citizens of the State of Israel, Jews and Arabs alike.

The response in both cases should be decisive and preventative. It should serve as a strong deterrent to any future illicit action. From a diplomatic standpoint, the U.N. Security Council convened for a further discussion on the issue, but no decisions are expected in the coming days. In the international arena, there is still a consensus that Israel has a right to defend itself.

The time for Israel to act is now. We have no choice but to strike Hamas hard and where it hurts. We are left with little option other than to hit all high-priority targets of this brutal terrorist organization. We must collapse its headquarters and tunnels and demolish its strategic facilities.

We are experts at knowing where and how to strike key targets. We should do so fast, and reinstate necessary fear into Hamas and its leadership circles. They must know without any doubt that there is no longer room for them above ground, and an exit from their hideout could result in a fatal encounter with the long arm of the Israel Defense Forces.

When I served as deputy defense minister seven years ago, the political echelon was presented with various options for inflicting a severe and decisive blow to Hamas and its leadership. We have the capabilities to do so, and it’s time to use all our strength and power to create a long-term deterrent. We have to cause Hamas to strongly consider its actions before launching the next round of rockets at innocent Israeli civilians.

The message to the leaders of this and other terrorist organizations should be clear. As long as they terrorize our civilians, the people of Gaza and Hamas leaders in particular will also be forced to live in fear. Hamas cannot dictate the pace to Israel. It should be the one requesting a ceasefire and regretting the moment when this needless escalation began.

In recent days, I have been interviewed by dozens of media outlets around the world, and each has asked me the same question: Are the hundreds of missiles and ongoing violence due to the evacuation of a house in Sheikh Jarrah? I will tell you what I told them. The simple answer is no.

This was a well-planned event. It was meticulously orchestrated and hundreds upon hundreds of rockets were stockpiled for the time when they would be used to target Israel’s civilians and cities. The incitement over Jerusalem began in Palestinian Authority Mahmoud Abbas’s office. It occurred simultaneously with his announcement of the cancellation of the P.A. elections so as to deflect attention from his unwillingness to give his people a fair vote. This incitement ignited extreme waves of hatred both within and outside Israel.

It must be made clear to the new U.S. administration and to the rest of the world that there are no two sides here. One side instigated the aggression; the other defended itself. Therefore, no one can call for “both sides” to exercise restraint. This type of call to action is illogical, and only serves to embolden the terrorists and aggressors.

During my long term as Israel’s ambassador to the U.N., I came to the realization that the dissemination of accurate information could change the rules of the game and help people understand the truth about Israel. Countries that previously did not fully appreciate the situation now know precisely who Hamas is.

They also are clear on the difference between a murderous terrorist organization and a humanitarian democracy. They know that Israel, one of the most humanitarian countries in the world, warns the civilians in Gaza before every single defensive attack, in order to prevent casualties.

In sharp contrast, Hamas launches rocket upon rocket without warning, and with the sole aim of maiming and killing civilians. This must end. We must come together and continue to pursue justice and advance the truth about what is really happening in Israel.

Ambassador Danny Danon served as Israel’s 17th Permanent Representative to the United Nations, Minister of Science and Technology and Deputy Minister of Defense. He is currently chairman of the World Likud.

Caption: Smoke and flames rise after an Israeli airstrike on a site of the Izz al-Din al-Qassam Brigades, the armed wing of Hamas, west of Khan Yunis in the southern Gaza Strip, May 11, 2021.
Photo by Abed Rahim Khatib/Flash90.