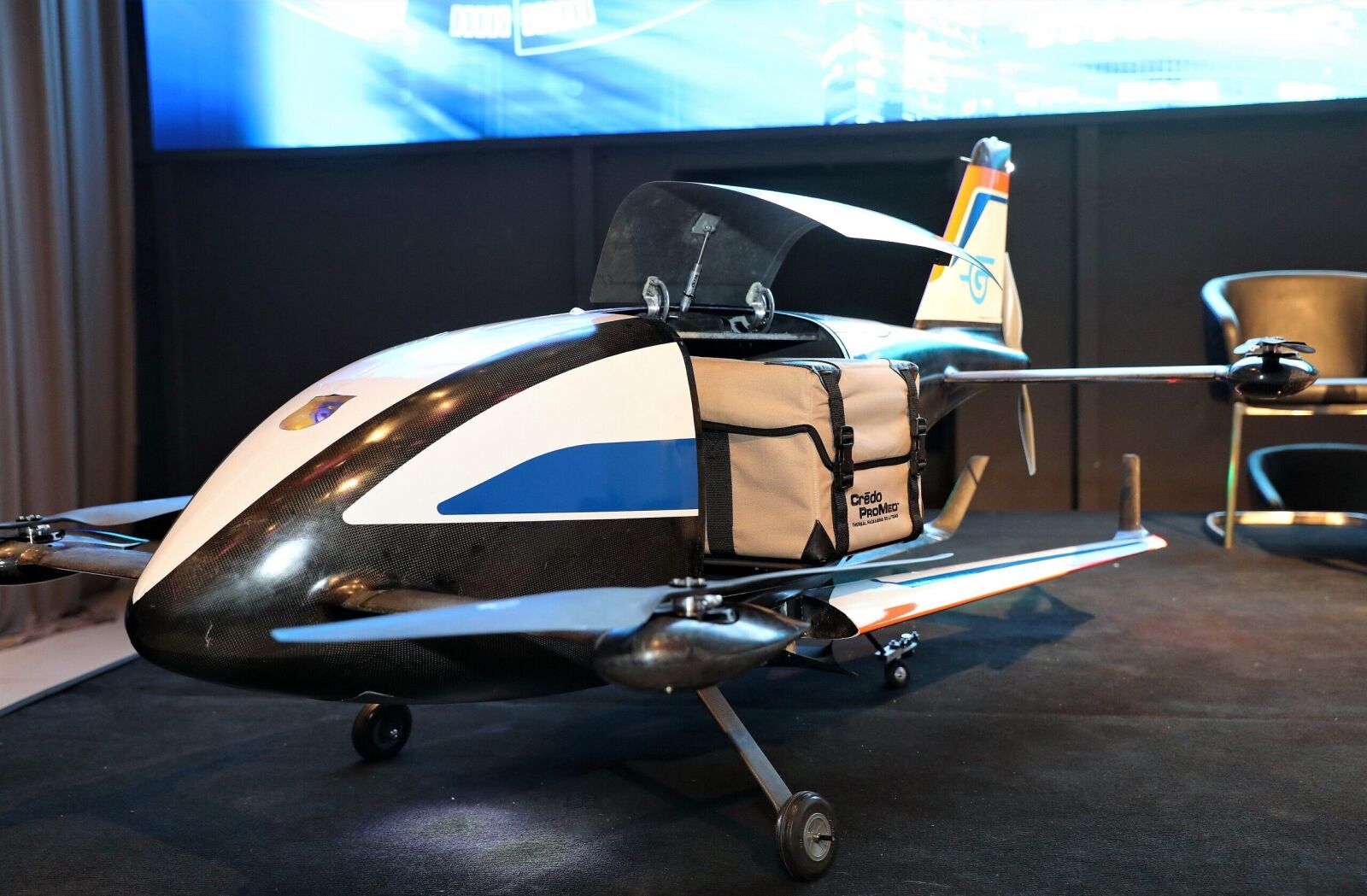 Gadfin, or “wings” in Aramaic—its flagship aircraft hovers like a UAV and folds out wings to fly like a plane—is hoping to connect Israeli hospitals with drone supply networks and has its sights set on providing essential services in remote Third World locations.

Israel’s Gadfin UAVs (Unmanned Aerial Vehicle) and drone producer was the first company in the world to receive the Israeli Civil Aviation Authority permit for urban airspace deliveries this year. That permit means that Gadfin can compete for tenders that provide a glimpse into the near future. Under this vision, hospitals, laboratories and a range of organizations will send and receive supplies via drone transport networks, skipping over-congested roads and reducing risk to sensitive, refrigerated packages.

Getting a permit to operate in Israel’s civilian airspace, which is small, crowded and limited to the space “left over” by the Israeli air force’s extensive use of the national airspace, is no simple process. It requires the overcoming of the most stringent safety protocols.

Gadfin holds several breakthrough patents, including for a first of its kind drone called “Spirit One” that folds out its wings in-flight. It can take packages weighing up to 15 kilograms across more than 250 kilometers. The aircraft are operated autonomously with almost no human intervention.

The company is also designing a larger version of “Spirit One,” called “Spirit X,” which can take 100-kilogram packages across 500 kilometers.

In an interview with JNS, Gadfin CEO Eyal Regev, a former senior manager at Israel Aerospace Industries (IAI) shed light on the remarkable origins of the company’s name.

“Train Gadfin means ‘two wings’ [in Aramaic],” said Regev, who has been studying Kabbalistic interpretations of the book of Zohar for 15 years on the side. “One wing represents the desires, abilities and the ego of a person, and the second represents the wisdom to use all of one’s abilities for good. If these abilities are used for good, a person can develop spiritually.”

Thus the name of the company was born. Gadfin was founded in 2018 together with Ran Kleiner, a former Innovation Manager at IAI, and Ilan Yuval, a leading logistics expert.

During his time at IAI, Regev’s roles included managing research and development of large-scale UAV systems, as well as heading the vertical take-off and landing (VTOL) and multi-rotor programs.

In 2006, he was the first to propose and implement the concept of delivery drones.

“I conducted market research and saw that this was a big potential market,” said Regev. “I established this as a department in IAI.” Later, he wanted to deepen his involvement in this field and develop new types of advanced technology that went “beyond delivering sushi to someone’s home.”

While the vision of food deliveries via drone will likely become a reality, he said, a larger problem exists in this area, described by Regev—in short, as “optimization.”

“When we look at the world, we see that most areas are in the periphery. Most peripheral areas are very much lacking the services that city centers enjoy. It’s true for Southeast Asia, it’s true for Africa, it’s true for South America, but also for the West. This applies to many services. Medical tests, for example, have short lifespans and need to reach destinations quickly,” he explained.

‘No other UAV does this’

In March, Gadfin began its first drone delivery service in Israel, moving high-priority machine parts from a logistics company warehouse to an HP-Indigo integration line. The $1 billion production machines need some 60 components per day on an urgent basis, and Gadfin installed its systems on a small UAV to begin testing out its delivery model as an alternative to land transport. The service stopped due to disruptions to clients caused by the coronavirus, but the precedent had been achieved.

The Israeli Transport Ministry has launched a program called “Na’ama,” which envisages a drone connectivity network linking most hospitals within two years. Even a relatively short logistics route from Tel Aviv’s Sourasky Medical Center to the Ein Kerem Hospital near Jerusalem could save much time if it becomes aerial since the highways and roads that link the two locations are often congested.

Gadfin has applied for a tender to supply four aerial routes in between hospitals in northern Israel, and is due to receive a response soon.

“We hope that within two years, we can connect Israeli hospitals. This could speed up deliveries of sensitive medical supplies like bone marrow transplants. These are highly complex and expensive deliveries on land,” said Regev. “Instead of having doctors or nurses accompany the delivery to make sure the taxi doesn’t stop in the sun, our aircraft whisks them to the lab or hospital in minutes.”

In Africa, the need could not be more acute and includes the need to quickly transport basic medical supplies such as blood donations. Far too many people in Africa and Asia die every year because of such logistical pitfalls.

“We searched for the technological breakthrough that could get through the obstacles holding up progress,” said Regev. “The first is the ability to fly long distances cheaply, efficiently and still electrically.”

Electrical engines are a must, he said, since the world is moving away from noisy, polluting engines, which are in any case less reliable. Regev secured unique patents in IAI, and then a few additional patents after founding Gadfin. He put together a team to map out the breakthrough.

“We brought together the best team in Israel, possibly the world—the best plane builders, experts in complex materials, top professors of aerodynamics, flight control and avionics—and managed to get to a platform that can stand up to strong winds, and be the only vehicle in the world in this category that takes off vertically like a UAV before folding out wings and flying like a plane, for hundreds of miles,” he said. “This is the ‘Spirit One.’ No other UAV does this.”

‘No need for personnel on the ground’

All of these capabilities have been met while still upholding the most stringent safety standards, he stressed. “We are in touch with huge companies in Southeast Asia, including in Indonesia, which wants to connect its array of 13,000 islands. This is a revolution, and it’s available at very low costs.”

The company is also currently developing a larger unmanned aircraft able to carry up to 100 kilograms. This “will enable the revolutionizing of the distribution of mailbags and packages throughout Israel, reducing delivery time down to several hours—much faster than anywhere else in the world,” said Regev.

In September, Gadfin announced an investment and collaboration agreement with Italian energy giant ENEL, the world’s largest electricity infrastructure company, through its Infralab innovation lab. The agreement is aimed at developing powerline inspection solutions and enabling drone surveys of 800,000 km of the company’s voltage lines, starting in Brazil.

Gadfin is conducting surveys for the Agar oil corporation, searching for gas and oil leaks from pipelines.

Logistics, however, is the biggest market, said Regev, estimating its worth at $40 billion.

Gadfin is currently developing robotic ground stations, which will remove packages from landing drones and refuel them using hydrogen fuel cells. “There is no need for personnel on the ground. These can be intermediate stations, extending the flight range,” he said. “A single control room can automatically manage tens of vehicles.”

“Spirit One” works with cellular network operators and SAT communications. It features an emergency parachute system that meets the U.S. safety standard for allowing drones to fly over populated areas, said Regev.

It recently completed a simulation for Walmart in Texas, showing how it can connect 26 company locations and keep them supplied 24-7.

With more contracts likely in the future, it appears as if Gadfin will continue to soar and make the reality of drone supply networks imminent.

Caption: Gadfin’s “Spirit One” UAV that folds out its wings in-flight. It can take packages weighing up to 15 kilograms across more than 250 kilometers. The aircraft are operated autonomously with almost no human intervention.
Credit: Courtesy.