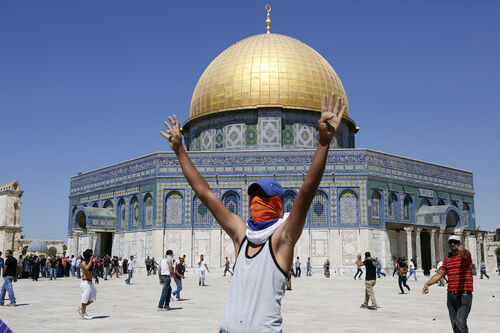 Distorting the reality of the Temple Mount as a tool for spurring death and destruction comes naturally to the honchos in Ramallah and Gaza.

The anti-Israel response to the current Palestinian and eastern Jerusalem Arab violence was to be expected, particularly as it has been on a steady crescendo since the weeks leading up to and during Islam’s holy month of Ramadan. But, contrary to the successful dissemination and perpetuation of propaganda, it has nothing to do with Israeli behavior or its celebration of Jerusalem Day—the anniversary of the unification of the city after the 1967 Six-Day War.

Palestinian Authority leader and his Fatah faction know this full well. Ditto for Hamas, which rules the Gaza Strip, and the other terrorist groups, such as Islamic Jihad, lurking in the enclave beyond Israel’s southern border.

Ironically, the real struggle taking place at the moment is between Fatah and Hamas, with Israel caught in the crossfire, yet forced to take police action against rioters in Jerusalem and launch military strikes over Gaza.

The timing of this latest round of so-called “clashes” is not coincidental. On the contrary, it was calculated and cultivated by Abbas, who rightly feared a Hamas victory in the legislative and presidential Palestinian elections—the first since 2006—ostensibly slated for the end of May. Before indefinitely postponing the vote, which he had only scheduled in the first place to appease his Western donors, the P.A. chief turned to his comfort zone of incitement against the Jews and Israel to prove to his people that he is just as stalwart and radical an anti-Semite as any of his Hamas rivals.

He is aware that one surefire method of exploiting the gullibility of and riling up young hotheads is to reiterate false claims about Israel trying to “storm” the Al-Aqsa mosque. Never mind that the house of Muslim prayer in question is located on the Temple Mount, the holiest site in Judaism. In the tradition of his predecessor—arch-terrorist and PLO chief Yasser Arafat—Abbas is a “temple denier” who rejects the Jews’ history in and connection to the city.

That this position runs counter to ancient Islamic texts is irrelevant to Abbas, who always plays fast and loose with facts as a matter of course. Nor does he have a problem simultaneously denying the Holocaust and accusing Israel of emulating the Nazis. So, distorting the reality of the Temple Mount as a tool for spurring death and destruction comes naturally to him.

To compete with his attempt to spark another intifada, Hamas and Islamic Jihad reverted to their own battle of attrition against the Jewish state whose annihilation it seeks. Before Israel’s disengagement from Gaza in 2005, this war was characterized by suicide bombings in Israeli shopping centers, buses, cafes and a discotheque.

When frequenting Israeli population centers became more difficult for Hamas after the withdrawal, it resorted to rocket, mortar and incendiary-device attacks over the border. Though normally not taking aim at Jerusalem—home of Al-Aqsa and an Arab population whose support it seeks and operatives it recruits—Hamas on Monday evening targeted the Holy City.

It was the first time since “Operation Protective Edge,” Israel’s 2014 campaign against terrorists and tunnel infrastructure in Gaza that the terror group actually aimed projectiles at and hit the Jerusalem area. It even proudly claimed responsibility for doing so, on the grounds that it was punishing Israel for “violently confronting” Palestinians there.

The fiction of Israeli provocations is as old as the declaration that the Jews are out to destroy Al-Aqsa. And regardless of evidence refuting both, once a lie is concocted and spread, it remains embedded in the minds of those who wish to believe it.

A classic example worth raising in this context is the myth that Ariel Sharon’s visit to the Temple Mount on Sept. 28, 2000 caused the outbreak of the Second (“Al-Aqsa”) Intifada, more aptly described as the more than four-year suicide-bombing war against innocent Israelis. Sharon, who later became Israel’s prime minister, was the head of the Likud Party and opposition at the time.

To this day, members of the Israeli left and their counterparts abroad stick to the story that by stepping foot on the site, Sharon “provoked” what was reported as a kind of spontaneous eruption of Palestinian terrorism. Yes, his ostensibly offensive gesture led to the mass murder of soldiers and civilians going about their daily lives.

The truth is, however, that Sharon not only had received permission from then-P.A. Preventive Security Service chief Jibril Rajoub to go up to the Temple Mount that day, but—more importantly—the Palestinian leadership had been planning a second intifada (the first having taken place from the end of 1987 to the fall of 1993) for nearly a year prior to the now-infamous visit.

It’s contemptible enough that any Israeli, let alone an official of high stature, needs to request the consent of a dastardly figure such as Rajoub for access to the world’s holiest Jewish site. At the very least, Sharon should have been given credit for sensitivity, rather than blamed for Palestinians killing hundreds of Israelis.

But the idea that such a lengthy, multi-faceted and bloody onslaught simply burst forth because an Israeli politician entered the Temple Mount complex is beyond outrageous. Anyone who ever accepted that fabrication needs to have his head examined.

The same applies to those who continue to allow the honchos in Ramallah and Gaza to get away with the Al-Aqsa hoax. It’s Jews, not Arabs, who are forbidden from praying on the holy site. And it’s Israel, not the P.A., which safeguards freedom of worship for all religions.

Ruthie Blum is an Israel-based journalist and author of “To Hell in a Handbasket: Carter, Obama, and the ‘Arab Spring.’ ”

Caption: A Palestinian rioter raises his hands in a "V" for "victory" near the Dome of the Rock on the Temple Mount in Jerusalem.
Photo by Sliman Khader/Flash90.