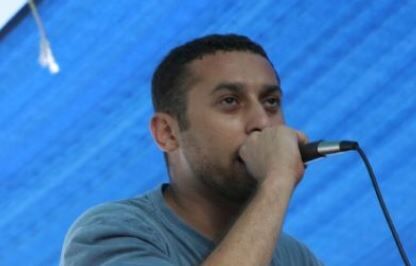 Arab-Israeli rapper Tamer Nafar has been removed from a Welfare Ministry campaign promoting a hotline to help those affected by violence in the Arab sector after protests over the blatantly anti-Israel messaging in many of his songs.

Religious Zionist party MK Itamar Ben-Gvir and the Shurat HaDin Law Center sent letters to Minister of Welfare and Social Security Meir Cohen last week saying that it was completely inappropriate for such a person to feature in a government-backed video.

Ben-Gvir wrote on Friday, “The State of Israel is taking a terror-supporting antisemite who calls for it to be boycotted for a publicly-funded, official campaign. This is nothing but a spit in the face of the Israeli public,” since “this is an extremist, nationalist and inciting musician known for his antisemitic and anti-Israel messages, who openly supports BDS…defines himself as ‘a Palestinian with Israeli citizenship,’ and has compared Israel to the Nazis.”

He gave several examples of lines from Nafar’s songs which compare the country to Nazi Germany, charge Israel with terrorism against Palestinians, and justify terrorism against Israel. The right-wing MK also noted that at a concert in the United States about two years ago, Nafar had told the audience, “I can’t be an antisemite alone, let’s try together.”

Shurat HaDin head Nitsana Darshan-Leitner threatened to take the ministry to the Supreme Court over the rapper’s support of BDS.

“The Boycott Law forbids the government from giving benefits to a person who publicly calls for the boycott of Israel,” she wrote on Thursday to Cohen. “How can it be that this ‘artist’ degradingly defames IDF soldiers, compares us to Nazis and at the same time gets paid by the Israeli government? I have no doubt that in the Arab sector, you can find plenty of artists who do not promote messages of support for BDS, racism and encouragement of terror.”

Cohen responded to Ben-Gvir that although his ministry had joined the campaign by sharing the video on its website, it had been funded by outside sources and taxpayer money had not been used. Still, in view of the evidence he had presented, the minister ordered the video to be removed, and for the staff to show more sensitivity in cooperative ventures with those whose participation could hurt the Israeli public.

Ben-Gvir reacted happily to the decision, thanking Cohen and saying, “Every country-hating artist should know that it is impossible to spit on the country and our soldiers, incite, slander and defame on the one hand and to lead a campaign on behalf of a government ministry on the other.”

In reaction, Nafar said that he had made the video for a private organization and that the ministry had put it on its site “without my permission and despite my demand for them to remove it.”