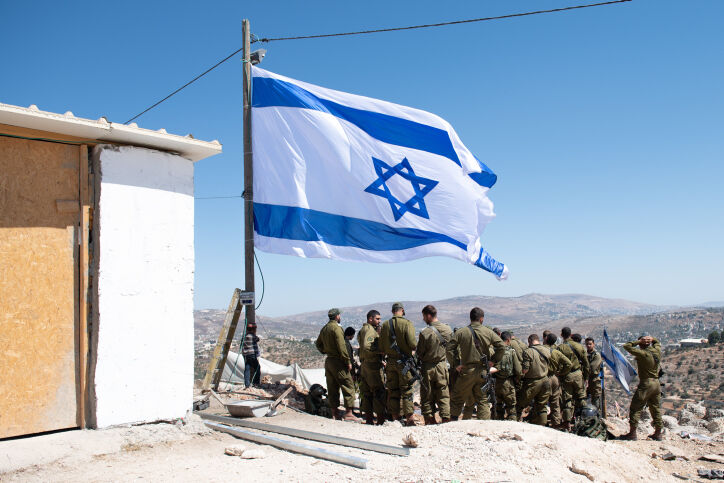 The Religious Zionist leadership’s decision to avoid a showdown in Evyatar guarantees that the next showdown will be far worse.

The biggest media story in Israel last week was the fall of the town of Evyatar in Samaria.

Evyatar is located between three Palestinian villages and two Israeli villages. It was originally settled in 2013, following the murder nearby of Evyatar Borovsky, only to be destroyed by the Israel Defense Forces. It was settled again in May by 50 families in response to the murder of Yehuda Guetta.

A little more than two weeks ago, Defense Minister Benny Gantz issued a new eviction order. The police and army brought in reinforcements to carry it out. Activists from all over Judea and Samaria and countrywide began streaming to Evyatar to support its residents. The countdown to the showdown began.

Last Monday, the sides announced they had reached a deal. The showdown was off. Prime Minister Naftali Bennett and his sidekick Interior Minister Ayelet Shaked mediated a deal between Gantz and Evyatar residents with the support of Samaria Regional Council leader Yossi Dagan and other communal leaders, including settlement legend Daniella Weiss. The deal called for the bulk of the residents to evacuate, for the yeshiva at the site to continue to operate and for the teachers and students to remain living in the town.

The settler leaders and Religious Zionist media—along with Bennett and Shaked—declared victory. Here was proof that even though he formed a government dominated by the left-Arab bloc, Bennett was still a man of the right, and was even getting the radical left and Islamists to agree to establish a new community in Samaria.

Not so fast, Gantz said. Gantz rejected the deal. The deal actually reached involved only one operative clause: The residents agreed to evacuate by Friday. Gantz gave a list of conditional agreements that all lead to one conclusion: The residents were had. Evyatar may rise again at some future date. But it probably won’t. And yet, the residents, major Religious Zionist figures, political and communal leaders all accepted the deal and praised Bennett and Shaked for their leadership and support.

The details of the deal—actual evacuation in exchange for vague promises of future agreements to reestablish the yeshiva pending various levels of regulatory approval—make clear that the purpose of the exercise wasn’t to pave the way for the establishment of a new Jewish community in Judea and Samaria. It was to avoid political embarrassment for Bennett and Shaked, and for the Religious Zionist elite that share their hatred for former Prime Minister Benjamin Netanyahu. The same elite that support Bennett and Shaked’s decision to ditch the right-wing bloc comprised of Likud, the ultra-Orthodox and the more ideologically rigid elements of the Religious Zionist community and form a government with the left, the radical left and the Muslim Brotherhood-aligned Islamist party.

The saturation coverage the Evyatar story received hid a much larger strategic story from view. While Bennett, Shaked, Dagan and other settlement leaders were pretending to pave the way for the formal establishment of Evyatar in the future, Bennett and Shaked’s coalition partners, Foreign Minister Yair Lapid and Ra’am leader Mansour Abbas, were pushing Israel down a strategic path that endangers the existence of all Israeli communities in Judea and Samaria.

On Tuesday, Lapid traveled to Abu Dhabi to attend the official opening of the Israeli Embassy in the United Arab Emirates.

Although he praised the Abraham Accords in the official ceremony, in an after-hours briefing with reporters, Lapid demeaned them and belittled their sponsor, former U.S. President Donald Trump.

Lapid told reporters, “The previous administration had the feeling that they [the Abraham Accords] came instead [of the peace process with the Palestinians] to show the world that you don’t need to advance on the Palestinian front.”

In other words, while sitting in Abu Dhabi, Lapid told reporters there was no intrinsic value to the peace deal between his country and his host country. It was all a stunt to push the Palestinians aside.

This brings us to Mansour Abbas. As Channel 20 reported last Tuesday, earlier in the week, Hassan Asfour, a senior Fatah official involved in negotiations between Fatah and Hamas, told Egyptian television that Abbas is mediating between Hamas and the Biden administration. The purpose of the talks is to pave the way for formal U.S. ties to the terrorist organization. When asked, Abbas did not deny Asfour’s account.

Channel 20 also reported that in an interview with the Arabic media last week, Abbas said his membership in the Bennett-Lapid government is all the proof needed to show that the government will respond positively to Palestinian demands. Like Ra’am, Hamas is aligned with the Muslim Brotherhood.

The Biden administration official leading the pro-Hamas line is Hady Amr, Assistant Deputy Secretary of State for Israel and the Palestinians. Amr is reportedly Biden’s candidate to serve as consul general in the consulate Biden intends to open in Jerusalem to serve the Palestinians.

In 2018, as a senior fellow at the Brookings Institute, Amr was the lead author of a policy paper calling for a future Democrat administration to formalize U.S. ties with Hamas to the extent permitted by law. He also called for Hamas to be integrated into the PLO. Amr called for large swaths of land under Israeli control in Area C of Judea and Samaria to be transferred to Palestinian control and for Jewish building rights to be frozen. And he recommended using Israel’s vulnerability in international forums like the United Nations and the European Union to force its government to comply with U.S. dictates.

Lapid and Abbas’s international intrigue brings us back to Evyatar and the Religious Zionist leaders who praised a deal that sees a community dismantle itself. Who praised Bennett and Shaked for forming a coalition dominated by forces committed to destroying the Jewish communities in Judea and Samaria.

The plaudits that leaders like Dagan showered on the Evyatar deal and on Bennett and Shaked angered Likud and ultra-Orthodox activists. Here were Dagan and Weiss praising a deal that gave them nothing while setting a dangerous precedent both for future settlement and for future evacuations. And last year the same leaders went to war against the Netanyahu-Trump sovereignty plan.

That plan gave Israel sovereignty over all Israeli communities in Judea and Samaria and the Jordan Valley—90 percent of what leaders like Dagan and Weiss want, and a path to achieve the remaining 10 percent of their goal. But Dagan and his partners said that deal placed everything they built in jeopardy, and proceeded to attack Trump and Netanyahu.

Bennett is the first kippah-clad prime minister in Israel’s history. For the past generation, Religious Zionists have dreamed loudly of the day the prime minister would hail from their community. So for some members of the community, Bennett seems like a dream come true.

But democracy is a tough game. Under normal circumstances, you can only get what you want by growing your numbers. As a small minority, Religious Zionists have no chance of becoming the largest political force in the country. So the game of democracy required them to be part of the right-Religious bloc. True, they agreed with Likud and the ultra-Orthodox parties on 90 percent of the issues and received 90 percent of what they wanted. But Likud—the largest faction—was in charge of national policy. And the ultra-Orthodox, who also outnumber the Religious Zionists, received control over the Chief Rabbinate.

Unwilling to accept this compromise, Bennett made a different, anti-democratic one. He abandoned his allies. He took his six-Knesset-seat faction to the other side and formed a new partnership with the left-Arab bloc. True, his voters and their voters only agree on 10 percent of the issues. But conceding nearly everything of importance for a title was worth the sacrifice.

Bennett’s betrayal of principle for position made him the most hated politician in Israel among his spurned former allies in the right-religious bloc. But until this week, it was assumed that he acted without the backing of his voters. The Religious Zionist leadership’s willingness to stand with him on Evyatar signaled that he wasn’t acting entirely alone. He did have a constituency for his betrayal. The settler leaders who opposed the Likud’s sovereignty plan support an evacuation deal that secures Bennett’s hold on power while endangering the entire settlement enterprise in Judea and Samaria.

The cleavage isn’t just between Bennett and Netanyahu. It is between the Religious Zionist elite and the nationalist camp as a whole.

And this is the real story of the past week. The strategic direction that Lapid and Abbas are taking the country in will soon place everything the Religious Zionists have been working towards in Judea and Samaria since the Six-Day War in jeopardy. Their decision to avoid a showdown in Evyatar guarantees that the next showdown will be far worse. And when they are called to fight, having cut themselves off from their partners and allies to follow their opportunistic leader, they will find that they are alone.

Caroline Glick is an award-winning columnist and author of “The Israeli Solution: A One-State Plan for Peace in the Middle East.”

Caption: Israeli security forces in Evyatar in Judea and Samaria, before its evacuation as part of a deal with the government, July 2, 2021.
Photo by Sraya Diamant/Flash90.