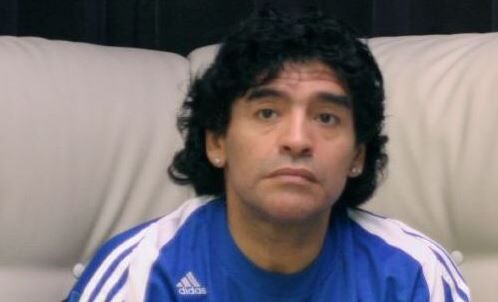 Diego Maradona, the legendary Argentinian soccer star who passed away on Wednesday, had an enormous amount of faith that the Holy Land was on his side.

Maradona visited Israel three times, first coming to Israel in 1986 when Argentina defeated Israel’s national team 7-2 in a World Cup preparation game at Ramat Gan Stadium in which he scored a pair of goals.

After the victory over Israel, Argentina went on to win the World Cup that year, defeating West Germany with Maradona providing the key pass for the winning goal with only a few minutes left in the game.

In 1990, Maradona and the Argentinian national squad returned to Israel again where he scored a goal in Argentina’s victory.

Channel 11 sports reporter Yoav Borowitz recalled attending one of the games that Maradona played in Israel, commenting, “It wasn’t a soccer game. I would call it more like a cultural-religious event.”

The last time he played in the country was in 1994, when he helped his team win 3-0, taking time out during the visit for a trip to then Prime Minister Yitzhak Rabin’s office in Jerusalem.

“It was really really exciting to be with him,” recalled veteran Israeli sports reporter Uri Levy, who covered Maradona and interviewed him several times.

“He turned his visits to Israel into something superstitious. He said that every visit to Israel … will bring us a World Cup (victory),” Levy explained, saying he came back to Israel again before the 1990 and 1994 World Cups.

However, the “luck” didn’t continue past 1986 with Argentina losing 1-0 in the 1990 final to West Germany, and four years later the heavily favored Argentinians had a surprise loss to Romania in the first playoff round.

With soccer the number one sport in Israel, the country joined with the rest of the world in mourning the passing of Maradona, considered to be one of the greatest to ever play the game.

“Diego Armando Maradona, el Pibe del Oro (the golden kid), brought joy and light to many millions of people in a dazzling career. A true legend,” tweeted Israel’s President Reuven Rivlin. “Our thoughts and prayers with his family, the people of Argentina and followers of the beautiful game around the world.”