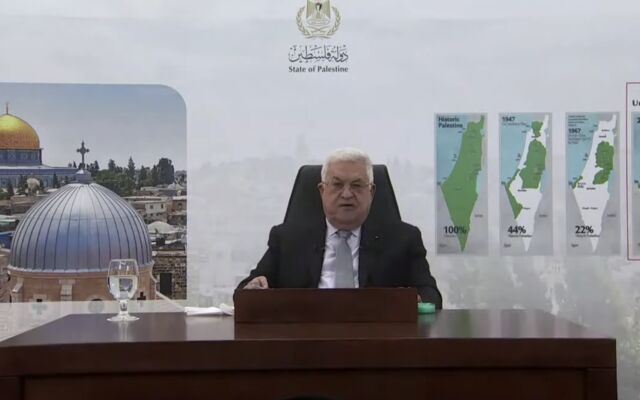 In the worldview of the Palestinian Authority leader, the creation of Israel was a catastrophe. For there to be peace, the Jewish state must submit to an invented Palestinian narrative and self-destruct.

One need look no further than the recent speech by Palestinian Authority leader Mahmoud Abbas before the United Nations General Assembly (via video conference) to understand why he is not a partner for peace. Referring to the creation of the State of Israel as a “catastrophe,” rewriting history, rejecting criticism of the P.A.’s terror-reward payments and telling outright lies were just some of the highlights.

The creation of Israel was a “catastrophe”

Abbas started his speech by noting, “This year marks the 73rd anniversary of the nakba.”

The word “nakba,” Arabic for “catastrophe,” is the Palestinian terminology used to refer to the creation of the State of Israel in 1948. For Abbas and the P.A., the problem is not the Israeli settlements built in Judea and Samaria after the 1967 Six-Day War, but rather the very existence of Israel.

This opening did not prevent Abbas later in his speech from arguing that there are many potential solutions to the situation, “including returning to a solution based on the partition plan of resolution 181 (II) adopted in 1947.”

Abbas seems to have forgotten that the Arab countries completely rejected U.N. Resolution 181—also known as the “Partition Plan”—and instead attacked and tried to destroy the new State of Israel and, in doing so, forfeited that option.

Abbas rejected the most generous offer of peace

Abbas continued with a bold challenge saying: “To those who claim there is no Palestinian partner for peace and that we do not ‘miss an opportunity to miss an opportunity,’ I challenge them to demonstrate that we have rejected even once a genuine and serious initiative to achieve peace, and I accept the judgement of the world in this regard.”

Thus, according to Erekat, Israel did make the best possible offer to Abbas, yet he refused it.

When making these claims, Abbas neglects a number of cardinal factors. Firstly, he ignores his own explanation of why he, his family and many other Arab inhabitants of Israel fled. As Palestinian Media Watch has shown, in many cases, the Arabs fled at the behest of the Arab armies.

Abbas himself explained that his family fled Safed of their own initiative, fearing the Jews would avenge the 1929 Arab massacres in Hebron and Safed:

Abbas: “The [Arab] Salvation Army withdrew from the city [Safed in 1948], causing the [Arab] people to begin emigrating. In Safed, just like Hebron, people were afraid that the Jews would take revenge for the [Arab] massacre in 1929 (Note: 65 Jews were murdered in Hebron, 18 in Safed) … [In 1948] the people were overcome with fear, and it caused them to leave the city in a disorderly way.” [Official PA TV, Jan. 1, 2013]

As PMW has shown, when Abbas demands the “return” of the millions of Palestinians who have never set foot in Israel, what he is really saying is that Israel should commit national demographic suicide, and agree to its own democratic destruction.

While Abbas claimed that the Palestinians remain “committed to all of [the Oslo Accords’] elements to this day,” he simultaneously demonstrated and defended the P.A. breaches of the agreements.

Despite multiple requirements in the Oslo Accords that the Palestinians prevent incitement and the promotion of violence, Abbas rejected the international criticism of the content of the P.A. school curriculum, asking why the Palestinians are required “to explain and justify what appears in our curriculum, which reflects our narrative and national identity.”

Despite multiple requirements in the Oslo Accords that the Palestinians prevent terror, Abbas justified the PA’s “Pay-for-Slay” terror-reward policy. As part of this policy, the P.A. spends tens of millions of shekels/dollars/euros on monthly payments to imprisoned terrorists, released terrorists, wounded terrorists and the families of dead terrorists, as exposed by PMW since 2011.

The recipients of these payments include murderers, members of internationally designated terror organizations and the families of suicide bombers. While the international community condemns these payments, Abbas stood at the U.N. to “salute” the “prisoners’ heroic stand.”

He indirectly confirmed the continued payment of rewards to terrorists, asking, “Why should we have to clarify and justify providing assistance to families of prisoners and martyrs?”

Clearly, when the P.A. incentivizes and rewards terror, this is a fundamental breach of the Oslo Peace Accords.

In other words, Abbas is striving to form a Palestinian government with Hamas. Hamas is a homicidal organization whose goal is the destruction of Israel. As a result of its involvement in terror, Hamas has been designated as a terror organization by the U.S., the E.U., Israel and others.

If Abbas were truly committed to “combating terrorism in all its forms,” as required by the Oslo Accords, and as he himself claims to be doing, the P.A. would and should be arresting and prosecuting the Hamas terrorists, not striving to form a government with them.

Further in his speech, without batting an eyelid, Abbas set a year-long ultimatum for Israel, during which he called for “solving all final-status issues under the auspices of the international Quartet.”

The “final-status issues” is a term taken from the Oslo Accords (Article XVII), referring to a number of issues that were left for future negotiations. Included in these subjects are “Jerusalem, settlements, specified military locations, Palestinian refugees, borders, foreign relations and Israelis.”

According to Abbas, there really isn’t anything to negotiate on these subjects. Rather, his expectation is that Israel simply capitulate to Palestinian demands.

Who controlled the areas Israel captured in 1967?

As the world knows, before June 1967, Judea, Samaria and part of Jerusalem were part of Jordan. Jordan had illegally occupied the areas in 1948 as part of the Arab rejection of the U.N. Partition Plan. While broadly rejected by the international community, Jordan even officially annexed these areas, claiming them to be part of Jordan. From 1948 to 1967, the Gaza Strip was occupied by Egypt. During this period, no one referred to these areas as “Palestinian territory” or considered declaring them to be the “State of Palestine.”

In fact, examination of the U.N. Resolutions 181, 242 and 338 lack any reference to the term the “Palestinian territories.”

Historical accuracy, it would appear, is irrelevant to Abbas.

What is the role of the PLO?

In his speech, Abbas made a point of “reitera[ing] that the Palestine Liberation Organization (PLO) is the legitimate and sole representative of the Palestinian people.”

The PLO is dominated by Abbas’s Fatah party. Hamas, the main Fatah rival that controls the Gaza Strip and won the last general elections held in the P.A. in 2006, is not a member of the PLO.

In the worldview of Abbas, the creation of Israel was a catastrophe. For there to be peace, Israel must submit to an invented Palestinian narrative and self-destruct. In the meantime, according to Abbas, the P.A. can promote violence, and incite and reward terrorism.

Despite having rejected an Israeli offer for peace, in which for the first time in history a “State of Palestine” would have been created on a land larger than the areas captured by Israel in 1967, Abbas still claims that he is committed to achieving peace.

While Abbas paid lip service to “dedicat[ing] his life to achieving peace,” his actions and positions were, and remain, the main obstacle to Israeli-Palestinian peace.

IDF Lt. Col. (res.) Maurice Hirsch is the director of Legal Strategies for Palestinian Media Watch. He served for 19 years in the IDF Military Advocate General Corps. In his last position, he served as director of the Military Prosecution in Judea and Samaria.