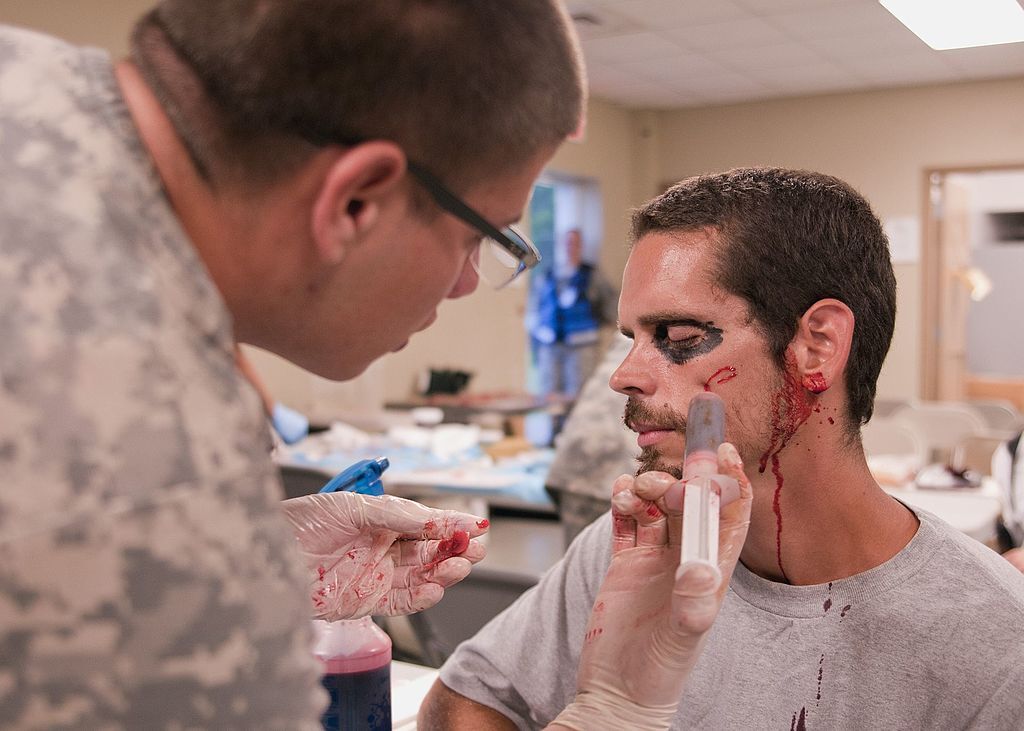 Call it the oddest job in the IDF. Or maybe it’s the spookiest.

The IDF recently released a video featuring a little-known task in the army – applying military makeup to simulate wounds during training exercises.

The goal is to train medics to prepare for battlefield conditions and correctly identify wounds when it’s time for the real thing.

While it paints holes in heads and burn marks on arms, the team doesn’t limit itself to makeup. It also provides lifelike battlefield conditions, including choking smoke and the rat-tat-tat of machine guns.

But it’s the makeup where the unit really excels and the wounds are so realistic that the IDF video comes with a warning that the video “includes images of open wounds that are created with makeup.”

The video opens with one of the team touching up a gaping bullet hole in the side of a soldier’s head. “Wait, let me add just a little more blood,” she says. It’s definitely not the sort of thing you’d hear at your neighborhood boutique.

Behind the fun of the makeup, if it can be called fun, lies the serious purpose of preparing medics for war.

IDF Corporal Eti Schzerbeck, who is in charge of the training, says that first comes intensive lessons, sometimes one-on-one, to teach how to treat wartime injuries. Only afterwards does he bring in all the smoke, makeup and combat sounds for the full effect of entering into a scene one would find in the middle of a battle.

Another member of the team, Corporal Ron Taib says it’s not about makeup, it’s about being responsible for students. “When I’m not applying makeup, I’m standing on the side, observing the medical team – are they correctly identifying the wound, what the wound requires,” she said.

Taib admitted that her friends and family know what she does in the army and sometimes take advantage of her skills to do their makeup. On Purim (an Israeli holiday similar to Halloween in that children, and often grownups, dress in costume), she’s fully booked, she says.

She said that once as a practical joke on her mother she applied makeup to her younger sister making it look like she had a huge gash in her thigh. Resilience Team members have a strange sense of humor.