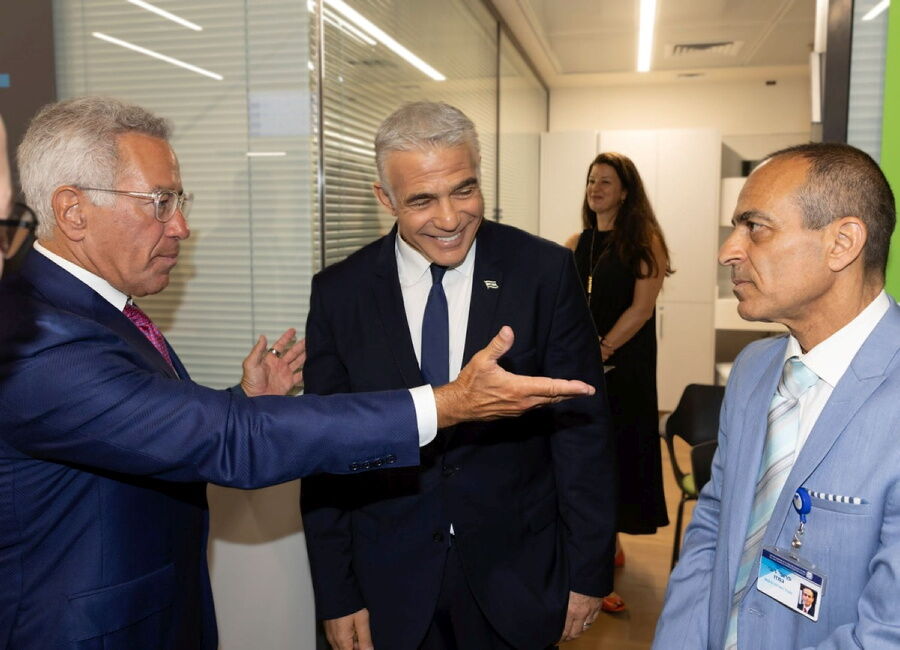 It’s not only the biggest emergency room in the world, but also the most technologically advanced.

The vast, new facility at the Ichilov Hospital, in Tel Aviv, has been designed to streamline the entire check-in procedure.

It was officially opened by Prime Minister Yair Lapid and President Isaac Herzog on Thursday.

Patients register on arrival using a facial recognition system, check their vital signs themselves, and are guided between departments by a robot. During their time in the ER, an app on their smartphone provides them with real-time updates.

Other hospitals may have some of these features – the navigation robots are popular – but nowhere else in the world has this combination of integrated tech elements to speed the process, cut waiting times and free up staff from bureaucracy.

“The digital path we have developed is unique,” Gilat Schreiber, Chief Technical Officer at Ichilov, tells NoCamels. Much of the work was carried out by the hospital’s own technical team, and was completed in a matter of months.

Some of the software building was outsourced but essentially the digital path is Ichilov’s own baby. The hardest part, she said, was integrating the new system into existing technology at the hospital.

The new ER – named after the Israeli-Canadian real-estate magnate and philanthropist Sylvan Adams, who donated $28 million – has 100 beds, and that figure can be doubled in an emergency. It covers 8,000 square meters over three floors.

“The Tel Aviv area, and Israel in general has only a few hospitals. There’s been no new hospital built since the 80s except for one in Ashdod (opened in 2017) and during that time the population has grown by two or three million people,” says Schreiber. Tel Aviv needed more ER capacity to cope with the 250,000 patients it treats every year.

Patients able to walk into the new ER will register digitally at a station next to the traditional reception, instead of standing in line to speak to a human. The check-in station scans the patient’s face, scans any relevant documents – such as their medical referral – and opens a medical file for them. “It’s like a secretary, getting all the all the data and then getting you into the system in a matter of minutes,” says Schreiber.

Patients then move to the self-triage station, where they self-check their temperature, blood pressure, pulse, and blood oxygen levels. The data is fed automatically to the patient’s computerized file and the system automatically alerts a medical professional if it detects a problem.

Ichilov has a team of five robots, always ready to help. “They escort the patient when when they need to go to another department, or to the toilet, or maybe to get their phone battery charged,” says Schreiber.

The hospital has also developed an app to update patients on their status, provide advice, and tell them if they’re likely to be hospitalized.

Schreiber says Professor Ronni Gamzu, CEO at Ichilov, was a “man with a vision” for the digital path. He wanted to create the world’s most digitally advanced emergency room.

But the digital path that has been in operation at the hospital for the last month is only a start, she says. The next step will be to automate the initial conversation between the patient and the nurse about their symptoms. The hospital is currently developing a digital system to handle this stage of the patient’s journey.

Technology is being used to handle more patients at the hospital more quickly, and despite the switch from people to computers, Schreiber says there have been no job losses at Ichilov.

The unit has a shock and trauma room, with two CT machines using groundbreaking artificial intelligence to view clinical findings in real time. And there are dedicated emergency rooms for orthopedics, eye, and head and neck surgery.

Prof Gamzu, the Ichilov CEO, said: “We are determined to prove that it is possible to demand and to receive quick, outstanding treatment even during busy periods.

“After over five years of strenuous work, I am proud to lead the medical and technological revolution in guaranteeing the best and quickest possible treatment in Israel.

“I am grateful to Mr. Sylvan Adams, whose generosity has fulfilled Ichilov’s dream on behalf of the more than 250,000 Israelis who visit Ichilov’s emergency care wing every year.”