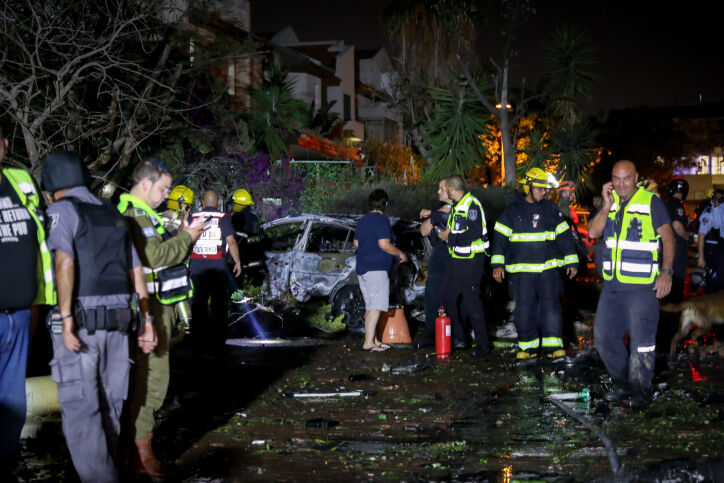 “United Hatzalah volunteers treated a bus driver who was seriously injured by a rocket that exploded near his bus in Holon as well as six other people who suffered light injuries,” United Hatzalah emergency service said in a statement.

The Israel Police said three rocket impact hits were found in Rishon Letzion. The Wolfson Medical Center in Holon received 18 wounded people, two in serious condition from the rocket attack on that city.

The Ichilov Medical Center in Tel Aviv received eight wounded people, one with moderate wounds and the remainder with light injuries, Ynet reported.

RAW FOOTAGE: This is the moment the Iron Dome intercepted a barrage of rockets over Tel Aviv and central Israel. pic.twitter.com/8jl8OTgWCl

Hamas claimed that it had fired some 130 rockets at Tel Aviv.

“Now, in fulfillment of our promise, the Al-Qassam Brigades has launched the largest missile strike on Tel Aviv and its environs, with 130 missiles, in response to the enemy’s targeting of civilian high-rises,” Hamas said.

Earlier in the day, two female residents of Ashkelon were killed by a Palestinian rocket fire on Tuesday after their homes sustained direct hits.

Hamas and Palestinian Islamic Jihad intensified and expanded the range of rocket fire throughout the day, firing further north towards Ashdod and threatening to strike Tel Aviv. The terror factions fired some 480 rockets at Israel since Monday evening, reported the Israeli Defense Forces, of which 150 exploded inside Gaza.

The Iron Dome air-defense system intercepted 200 of the rockets heading for populated areas.

Meanwhile, the Israeli Air Force launched a massive wave of strikes on Tuesday, sending 80 aircraft to destroy 150 rocket-launch pits, most of them in northern Gaza, said the IDF.

The operation included the use of F-35 fighter jets. The strikes on the tunnels destroyed the firing capabilities of three Hamas battalions, which have “sustained a significant blow,” International IDF spokesman Lt. Col. Jonathan Conricus told reporters.

“Some, if not many, of the firing pits that are used by Hamas and Palestinian Islamic Jihad are embedded within the civilian population,” he added.

Several senior terrorist commanders were also killed in Gaza as part of the IDF’s targeting of operatives and their commanders. These include Samih al-Mamluk, the head of Palestinian Islamic Jihad’s rocket unit in Gaza; Muhammad Abu al-Atta, brother of the Palestinian Islamic Jihad’s late commander, Baha Abu al-Atta, who was killed by Israel in 2019; and an additional commander. The three were in a hideout apartment.

“They have also tried to use a tunnel, sending a special elite Hamas terrorist unit to conduct an attack,” he stated. “They are not trapped inside the attack tunnel. We know they were trying to emerge from it and attack on our side of the border.”

IDF Chief of Staff Aviv Kochavi said that it has conducted strikes on over 500 targets in the past day.

“We are determined to strike terror groups in the most serious way possible,” Kohavi said.

Extracting a price from Hamas for its attacks

Conricus indicated that the IDF was not expecting any slowdown in the fighting in the near future. “Our intention is to enhance our activities. Our orders are to plan for the next 24 hours in terms of targets and operations, and we have a lot of targets. All of that planning is done while trying to minimize collateral damage in a very challenging environment where terrorists and their infrastructure are embedded in the population,” he explained.

The IDF killed “at least” 20 Hamas and Palestinian Islamic Jihad members, said Conricus, adding that is a conservative estimate.

Meanwhile, the IDF called up a reserve Iron Dome battalion that it will field in the coming hours to support existing battalions. It also called up 3,000 reservists, mainly with headquarters and staff positions, to help coordinate the IDF’s ongoing fire and intelligence activities.

Ground forces have been gathering at the Gaza border, but Conricus said that this movement was for enhancing defenses and “minimizing the chance for surprise attacks.”

Israel continued to signal that it was not interested in discussing truce proposals at this stage, due to its focus on the mission of extracting a price from Hamas for its attacks.

Conricus said “we’ve been told to prepare for various scenarios. We are focusing on targeting operations,” assessing that the coming 24 hours will likely see more rockets into Israel and more airstrikes in Gaza.

Caption: Police and rescue personnel at the scene of a building in Rishon Letzion that was directly hit by a rocket fired from the Gaza Strip, leaving one Israeli dead. More than 130 rockets were fired from Gaza into central Israel on May 11, 2021.
Photo by Noam Revkin Fenton/Flash90.